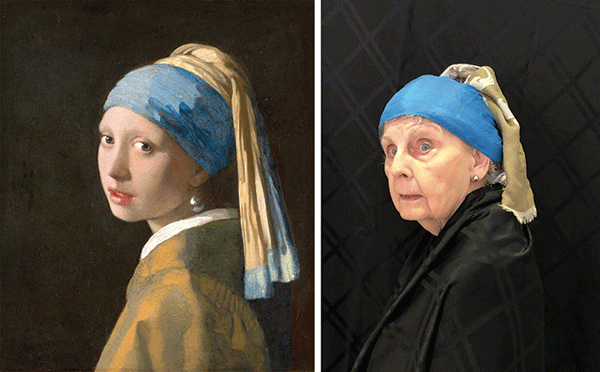 Left: “Girl with a Pearl Earring,” about 1665, Johannes Vermeer. Right: Re-creation by Betty Chiles, Veranda of Pensacola. (Image courtesy of Mauritshuis, The Hague.)

When Brittney Giammaria, activities coordinator at the Veranda of Pensacola retirement community, first tacked printouts of paintings to the community bulletin board and began encouraging residents to come to her “art re-creation” photo shoot, she thought she’d get maybe four or five takers. She had spent weeks explaining the challenge, which had initially been created by the Getty at the end of March.

On the day of the photo shoot, Giammaria put down a box of props and costumes, and spread around 25 printouts of paintings on a table in an event room, including Grant Wood’s “American Gothic,” Frida Kahlo’s “Self Portrait With Bonito,” and Leonardo Da Vinci’s “Lady with an Ermine.” At first, only a few of the more extroverted residents let her take their photo. One gentleman selected Rene Magritte’s “The Son of Man,” so Giammaria gave him a face mask to wear that she had adorned with a picture of a green apple. Another chose Saturday Evening Post artist George Hughes’s illustration of a swimwear-clad boy playing the piano; he took a seat at the community piano wearing red swim trunks.

The half-naked man at the piano got the residents’ attention. Others began peering at the paintings and brainstorming how they could recreate them. In all, more than 20 residents and staff chose a painting and had their picture taken. And dozens more stayed to watch, all maintaining social-distance protocols as they delighted in their friends and neighbors’ transformations.

“There is a lot of pressure on the entire staff to keep these people safe, and for these people to keep themselves safe, and we just kind of forgot about all of it for the day and that was the most special part,” Giammaria said.

The Getty Museum Challenge found its way to many senior communities by way of staff, often the activities directors who work to provide residents with entertainment like classes, day trips and game nights. With early outbreaks of COVID-19 clustered in senior communities, these facilities were among the first to institute safety precautions such as prohibiting visitors and trips outside the grounds, limiting class sizes or canceling them altogether, and instructing residents to avoid gathering in groups – leaving staff scrambling to find ways to keep residents both busy and socially distant.

Then, the Getty Museum Challenge began popping up on social media and, eventually, national news. Staff realized that the challenge would allow residents to not only exercise their creativity and enjoy a bit of escapism, but also practice social distancing.  Photos were taken in small groups and everyone wore face masks (up to the moment the picture was taken, of course). Giammaria posted all the photos on the community board and said even now, weeks later, people are still stopping to admire them, and they want to plan another photo shoot.