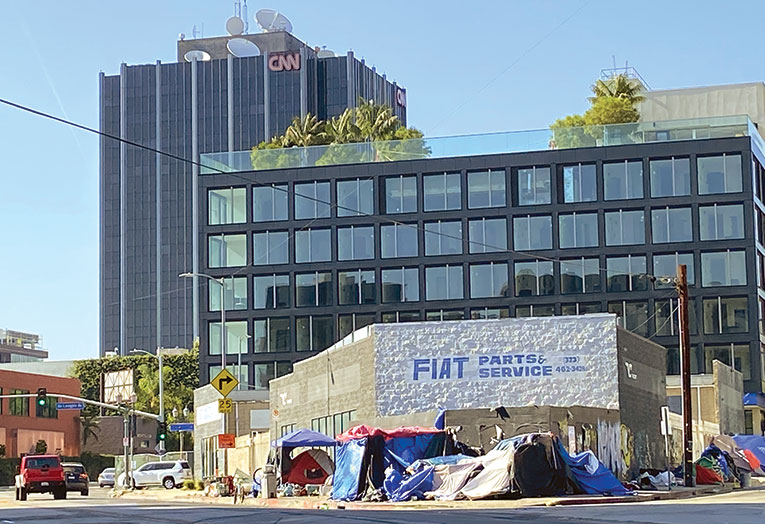 Homelessness continues to be an issue throughout Los Angeles. City leaders in Hollywood remain focused on ending the problem. (photo by Edwin Folven)

The Los Angeles Homeless Services Authority announced last week that numbers reported for the 2019 Greater Los Angeles Homeless Count have been revised after University of Southern California statisticians used an improved methodology for calculation that is considered more accurate.

The changes slightly reduced the overall 2019 total in Los Angeles – from 36,165 as previously reported to 35,550. However, the changes to numbers in some individual council districts were more significant. For example, in the 4th District, a 52.8% increase in the number of people experiencing homelessness was reported in 2019 over the previous year. Under the revision, the 4th District only experienced a 23.7% increase from 2018 to 2019.

According to LAHSA, the changes resulted from improved statistical calculations that were used for the 2020 count. Statisticians with USC went back and used the improved methodology for 2019. The revised numbers and the previous totals remain within statistical margins of error. The revisions were initiated by USC and not LAHSA, LAHSA spokesman Christopher Lee noted.

“There was no problem or error with the originally released data, but USC’s team has found the new methodology to be more accurate,” Yee added.

The changes have caused some to consider whether the information being provided by LAHSA is as accurate as previously believed. Homelessness is one of the top issues affecting the city, and having accurate numbers is paramount for determining where and how to use resources. Councilman David Ryu, 4th District, said he is concerned by the revisions but remains focused on addressing homelessness as it exists now in 2020.

“The revisions and inaccuracies in the district-level numbers are concerning, but they only reinforce what I’ve been saying all along – we don’t solve homelessness one district at a time, we solve it with a citywide, emergency response,” Ryu said. “I put forth a plan last year to bring a real emergency response to homelessness, and I’m going to keep building housing and pushing for solutions that tackle a citywide problem of homelessness once and for all.”

“[The] increase in homelessness further validates the council member’s priority to build more supportive and affordable housing while increasing physical and mental health services to those experiencing homelessness across the city, including the 13th District,” O’Farrell’s spokesman Tony Arranaga said.

To view the revisions, visit lahsa.org.