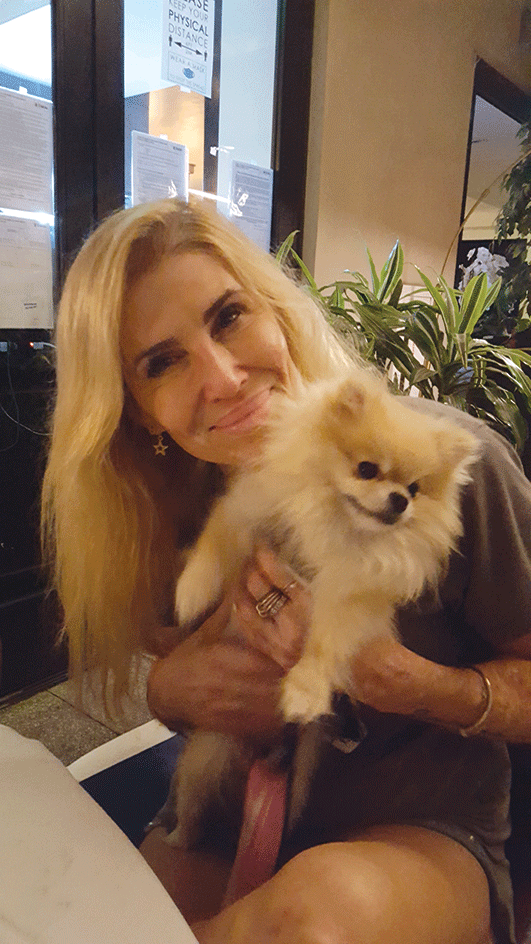 Gina Bisignano thought she may never see her dog Lolli again, but they were reunited on Aug. 5. (photo courtesy of Gina Bisignano)

A 2-year-old Pomeranian named Lolli was reunited with her Beverly Hills owner earlier this month after allegedly being dognapped on Pico Boulevard and taken to Las Vegas.

The reunion was made possible by officers from the Beverly Hills Police Department, who received help from the Los Angeles Police Department’s Wilshire Division and the Las Vegas Metropolitan Police Department. Owner Gina Bisignano said she thought she may never see Lolli again, but thanks to the work of multiple law enforcement agencies, her prized Pomeranian is back home and the alleged dognapper is in jail facing charges.

“For 17 days, I was devastated,” Bisignano said. “I really want to thank the police officers who helped find my dog and get her back. I didn’t think there would be a happy ending.”

On July 20, Bisignano stopped at a dry cleaner on Pico Boulevard just south of Beverly Hills and jumped out of her car for what she said was only a minute. A car pulled up behind her vehicle and a man jumped out and smashed her window with a crowbar. The suspect grabbed a purse, got back in the vehicle and fled. Lolli, who weighs less than 5 pounds, was inside the purse.

“I had a panic attack,” Bisignano said. “I fell on the ground and just started crying.”

The theft occurred in Los Angeles and was investigated by detectives at the Wilshire Division, who were also experiencing an auto burglary spree and thought the dognapping was related. They recovered video footage and identified the vehicle involved in the crime.

In July, a similar vehicle – a late-model orange Ford Mustang – had allegedly been involved in numerous other auto burglaries in the LAPD’s Wilshire, West Los Angeles and Pacific divisions, as well as West Hollywood and Beverly Hills. Investigators in those areas were working together to find the car and the suspect involved in the alleged crime spree.

On Aug. 5, officers from the Beverly Hills Police Department’s Crime Impact Team investigated an attempted burglary at the Christian Dior store on Rodeo Drive and realized the vehicle description was similar to a car involved in previous crimes, including a break-in on July 12 in the 400 block of North Rodeo Drive. Because that suspect had previously targeted cars parked at shopping malls, officers checked the Westfield Century City Mall and located the Mustang. Detectives arrested two suspects, one male and the other female, identified as Jasper Luke, 27, and Adriana Martinez, 29.

BHPD detectives knew Wilshire Division investigators were looking for a dog stolen during one of the burglaries and the car may be related, and during questioning, Luke divulged Lolli was in an extended-stay Las Vegas hotel room he had rented. BHPD detectives and LAPD investigators coordinated and contacted authorities in Las Vegas, and LVMPD officers went to the hotel and found the dog.

Detective Sam Arnold, with the LAPD’s Wilshire Division, described Luke as a serial criminal who travels to many locations to commit crimes and elude police. He allegedly rents late-model vehicles and frequently targets shopping centers for car burglaries. On Aug. 5, the date of arrests, the suspect allegedly burglarized vehicles in parking lots at The Grove and the Original Farmers Market, Arnold said. Luke is believed to be responsible for at least 12 recent auto break-ins, he added.

When Arnold received word from the LVMPD on Aug. 5 that Lolli had been found in the hotel room, he called Bisignano to give her the news.

“She was a very persistent victim,” Arnold said. “This pet was like a family member to her. I was glad that we were able to make the recovery.”

“I am so thankful for the police officers,” Bisignano added. “If it wasn’t for them, I don’t know what I would have done.”

Beverly Hills Police Department Lt. Max Subin also said he was pleased the dog was returned and the alleged perpetrator is facing charges. Martinez was issued a citation to appear in court on Oct. 5 and was released. Luke remains in custody without bail in the Men’s Central Jail awaiting a court hearing on Oct. 5. He faces auto burglary and theft charges.

Subin added that the city’s closed circuit surveillance cameras were a major factor in identifying the vehicle and solving the alleged crimes.

“The City Council has made it a priority to increase the number of cameras we have in the city,” Subin said. “They are a huge help in keeping the city safe.”