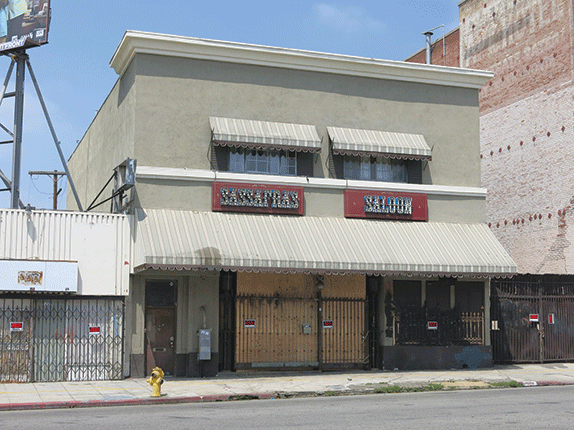 The Sassafras Saloon is owned by the 1933 Group, which owns many popular bars in Los Angeles. (photo by Cameron Kiszla)

Reports of a private party held at the Sassafras Saloon in Hollywood on July 31 have prompted investigations into whether holding such an event during county public health orders requiring bars to remain closed was illegal.

The incident has also implicated law enforcement with allegations that the party was held for Los Angeles County Sheriff’s Department personnel and was attended by first responders.

Representatives of 1933 Group, the company that owns the Sassafras Saloon at 1233 N. Vine St., did not return requests for comment. It has not been divulged specifically who held the party.

Footage of people inside the bar was posted on social media and CNN reported that an anonymous source had provided a tip that a party for first responders was occurring at the bar. The party was widely reported by other media outlets as well. In a video, people at the party said it was for the Los Angeles County Sheriff’s Department.

In response to the allegations, the sheriff’s department launched an investigation to determine if any deputies or personnel were involved or acted inappropriately. So far, no deputies or LASD employees have been determined to have been involved. The department issued a post on social media alleging the situation was a hoax.

“Reports of LASD hosting a party in Hollywood, as well as the reporting of several individuals who were identified as LASD personnel in attendance, are categorically false and appear to be a hoax perpetrated by social activists,” the tweet from @LASDHQ read.

The LAPD has also launched an investigation to determine if any officers or personnel were involved.

“The department is aware of video posted on social media that captured an event that does not appear to be following public health guidelines. We are trying to identify LAPD employees who may have been in attendance,” an LAPD statement read. “The chief of police has made his expectations clear and department notices have been distributed that every employee shall wear a face covering and practice social distancing when possible at work and in the field. All employees are expected to follow these public health guidelines when they are off duty as well. A personnel investigation will be initiated if it is found that any misconduct occurred.”

Los Angeles County Health Director Barbara Ferrer addressed reports about the party at a briefing and said the county has zero tolerance for violations of current orders requiring bars to close. The Los Angeles County Department of Public Health has sent inspectors to the bar and is investigating the party. It has not been determined whether the owner will face penalties from the county. The California Department of Alcoholic Beverage Control is also involved in the investigation but has not taken action.

“ABC expects all licensees to comply with the current health orders to help stop the spread of COVID-19,” ABC spokeswoman Veronica Andrade said.

The ABC reviews reported violations and decides whether to pursue disciplinary action against the licenses for violating government codes. If disciplinary action is taken, business owners have a right to request a hearing before an administrative law judge, Andrade added.

Penalties for violations of the state law range from fines to suspension or revocation of a liquor license. The actions taken generally depend on the track record of the business and whether there have been multiple violations of the law, Andrade said.

Grammy Museum announces new round of artists for public programs