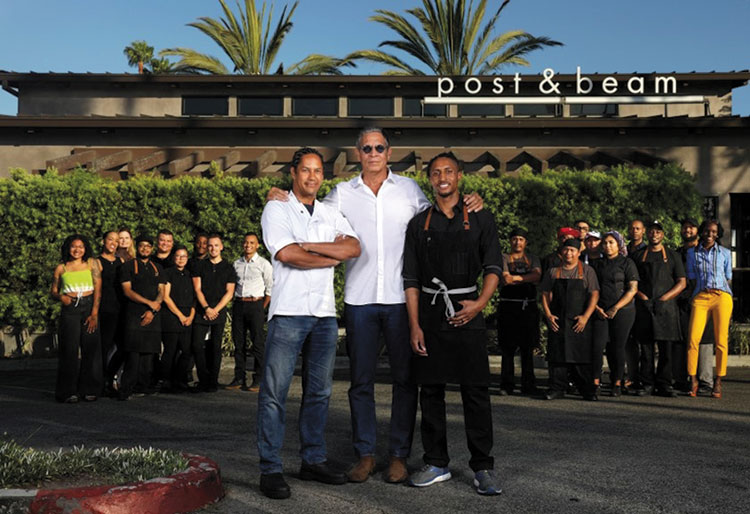 The Los Angeles Times Gold Award is given annually with the “purpose of honoring excellence and expanding the notion of what Southern California cooking might be,” as described by Gold in 2017, prior to his death.

In addition to the Los Angeles Times Gold Award, Post & Beam was also added to “Jonathan Gold’s 101 List” during its first five years of operation and received a positive review from the former Los Angeles Times’ restaurant and wine columnist S. Irene Virbila.

Establishing itself as a South L.A. cultural institution, the Johnsons opened the fine dining restaurant in 2011. It is located adjacent to the Baldwin Hills Crenshaw Plaza Mall.

Armstrong served as head chef, mentoring and eventually passing the baton to Cleveland. Last year, the Clevelands took over ownership of Post & Beam, keeping it a Black-owned business.

“With the changing of the guards, John will benefit from business consulting and access to senior leadership as well as mentorship in the kitchen from Govind, while Linda and I will focus on extending the brand through Post & Beam Hospitality,” Johnson said.

“I consider myself a ‘working chef’ and I love creating California comfort food,” Cleveland said. “Comfort food is simple; yet it requires perfect execution.”

This week, foodies and food lovers are encouraged to visit Post & Beam during Black Restaurant Week, which is going on through Aug. 16. In its fifth year, the event celebrates the flavors of African American, African and Caribbean cuisine.

Post & Beam is open Tuesday thru Friday from 4-8 p.m. The restaurant offers outdoor dining, as well as limited-contact, private day parties for gatherings up to 25 guests on its open-air patio. You can also order online, on the Post & Beam app, available on Google Play, and on Postmates.