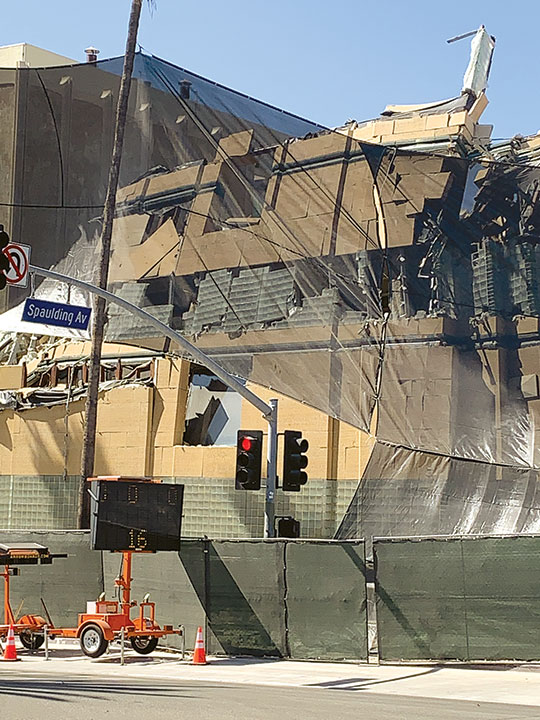 The Art of the Americas Building was demolished during the past week, further changing the landscape of the Miracle Mile. (photo by Karen Villalpando)

Major changes have occurred in the Miracle Mile over the last week as the Los Angeles County Museum of Art continues demolition for its project transforming the museum campus.

The Art of the Americas Building, which fronted Wilshire Boulevard and served as the main entrance to LACMA, has been razed, with demolition scheduled to be completed by the end of the week. The Leo S. Bing Theatre and Hammer Building have already been demolished and work continues this week on the Ahmanson Building, where hazardous materials abatement and demolition is ongoing. The sidewalk along the north side of Wilshire Boulevard between “Urban Light” and Curson Avenue was also scheduled to reopen this week.

The general contractor, Clark Construction, is also installing beams for a shoring system at the former museum parking lot at the southeast corner of Wilshire Boulevard and Spaulding Avenue. Excavation at the former Spaulding lot will begin soon and the contractor is also relocating utilities west of the Resnick Pavilion.

The demolition began in March and has continued through stay-at-home orders due to COVID-19 because it is designated as a major infrastructure project. The contractor is following all government guidelines for work during the pandemic including the use of protective gear, frequent handwashing and sanitization of high-touch areas, and body temperature checks and symptom screenings for workers before every shift. All members of the crew are required to maintain physical distancing. An on-site supervisor who is also a medic is in charge of ensuring all COVID-19 protocols and guidelines are followed.

The demolition is expected to be complete this fall, LACMA spokeswoman Jessica Youn said in a statement. Construction of the new building will begin shortly thereafter. The museum is providing weekly updates on construction by visiting unframed.lacma.org.

LACMA’s transformational project will change the Miracle Mile and Museum Row. The buildings currently being demolished will be replaced by a singular, serpentine structure that will cross over Wilshire Boulevard like a bridge and connect to a new portion of the campus at the site of the former parking lot on Spaulding Avenue. The Peter Zumthor-designed building will have an exhibition level with a floor-to-ceiling glass facade to allow for more natural light and enhanced connection with the outdoor environment. It will also have a single-level open interior, making it a more accessible environment for viewing the museum’s permanent collection and evolving exhibits.

The new main structure will offer 347,500-square-feet of area and approximately 110,000-square-feet of gallery space. Eliminating the Bing Theatre and the Art of Americas, Hammer and Ahmanson buildings will create 3.5-acres of outdoor space for more programs and exhibits. LACMA expects the new museum building to be complete by the end of 2023.

The $650-million LACMA project was met with significant opposition during its conceptual phase, including the re-envisioning of the main gallery as a singular space. However, museum officials and the county of Los Angeles moved forward with the project, which has been in the planning stages for years.

The demolition of buildings on the LACMA campus has sparked mixed reactions among members of the community. Some said they were sad to see the buildings go while others said it represents change and a better future for the museum.

“I knew they were going to tear it down but didn’t know when. My wife and I had so many memories there,” said Jim O’Sullivan, president of the Miracle Mile Residential Association, which represents homeowners and renters in the area around LACMA. “It was so emotional seeing that. I think they could have rehabilitated those buildings or done any number of things.”

Ken Hixon, vice president of the MMRA, added that he hasn’t heard of any impacts the demolition is having on the surrounding neighborhood. Seeing the buildings come down has been surreal, he added.

“It kind of feels a little like the ‘Twilight Zone,’” Hixon said. “It plays with your perception of reality that something could be part of your life for so many decades and it just disappears.”

Mark Overbaugh, president of the homeowners association at the Wilshire Galleria, a 118-unit condominium complex on Spaulding Avenue just south of the construction site at the former parking lot, said LACMA has been very responsive to concerns and he has not heard any complaints from residents.

“We are the only residential structure that borders anywhere on the project. They have been really attentive,” Overbaugh said. “Since the groundbreaking and demolition has occurred, they have been responsive and responsible. They have definitely upheld their end of the deal.”

Stephen Kramer, president of the Greater Miracle Mile Chamber of Commerce and an attorney with offices near the museum, said he is pleased to see progress with the LACMA project.

“It’s heartening to see them moving forward,” Kramer said. “We are entering a different stage of the project and that is exciting.”

The Mid City West Community Council was mixed in its analysis of the project. The council supported the project’s design component spanning Wilshire Boulevard but opposed a new parking structure planned for Wilshire Boulevard and Ogden Drive because members didn’t think that was good use of space, said MCWCC Chair Scott Epstein. That notwithstanding, he said he is excited about the new museum building.

“I think the strong feelings around this project and the demolition of buildings that have served the public for decades are very understandable and I share them to some point,” Epstein said. “We are hopeful the new design will add a lot to the community, but I understand people have a wide range of opinions on the project.”

Plans called for portions of the museum to remain open during demolition and construction, including the Resnick Pavilion, BCAM and outdoor public spaces. The museum is currently closed due to the COVID-19 pandemic, but programming and content is frequently added to LACMA’s website to keep visitors involved with the museum and its art collections. Visitors can watch short films and documentaries and take virtual tours of exhibitions. Curated audio soundtracks, compositions and previously recorded live music are available, as well as catalogues of the artwork. This week, LACMA is taking visitors on “A Visual Dive into Buddha for Beginners,” an exploration of images of Buddha and their cultural and religious significance.

Youn encouraged people to sign up for updates released every Monday on LACMA project construction and online art programming by visiting lacma.org.

The Miracle Mile Residential Association has since its inception represented renters as well as homeowners. Many of our many board members have been and still are renters. Renters make up over 60% of the Miracle Mile population and we are richer for that.