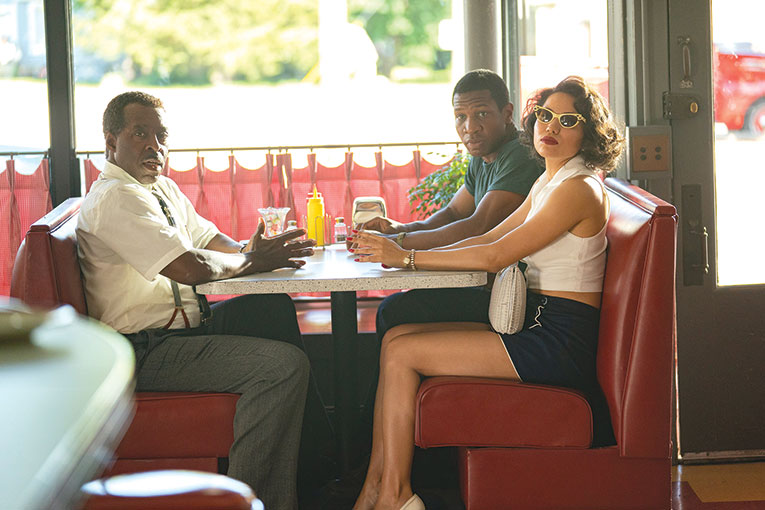 Courtney B. Vance, left, Jonathan Majors and Jurnee Smollett star in “Lovecraft Country,” an HBO series set in the 1950s that explores the effects of racism while also being a compelling horror story. (photo courtesy of HBO)

A riveting TV pilot is more rare than believable visual effects on the small screen, but “Lovecraft Country,” based on the 2016 novel by Matt Ruff, kicks off with 70 minutes of a gripping narrative yarn, incredible production and enviable CGI.

Race in 1950s America converges with monsters of all kinds to dramatic effect in this HBO series (also available on HBO Max) sure to keep getting better over the next two months.

J.J. Abrams might be the most established name involved with the project, but the series’ marketing rightly notes the other two big names: Misha Green (WGN America’s “Underground”) and Jordan Peele (“Get Out,” “Us”). The latter helped make the show happen, while the former serves as showrunner, setting a brisk page (by HBO standards), overseeing a stellar cast and holding all those cliffhangers close to the chest. They’re the real stars – Green more so – and that helps complement the long list of Abrams series that dip into fantasy, horror and sci-fi with something more culturally gripping.

The premise, like the series’ lead Atticus Freeman (Jonathan Majors), or Tic to some, is incredibly nerdy. The name alone should be a tip of the hat to any fright enthusiasts ready for more contributions to the horror renaissance at work in folks’ living rooms. Something with “Lovecraft” in the title is an undead giveaway, so let’s pause for a moment to discuss.

H.P. Lovecraft was a horror icon, composing notable fictional works like “At the Mountains of Madness,” “The Shadow Out of Time” and “Herbert West-Reanimator,” the latter eventually adapted into three raunchy “Re-Animator” films. The common phrase “Lovecraftian” refers to the author’s aesthetic influence on horror and science fiction (especially tentacled creatures), including creators like Stephen King, John Carpenter, Sam Raimi and Guillermo del Toro. And before King would concoct a multiverse across novels and short stories, Lovecraft, who died in 1937 at age 46, provided a prototype universe that spanned his novels, novellas and short stories as well.

Courtney B. Vance, left, Jonathan Majors and Jurnee Smollett star in “Lovecraft Country,” an HBO series set in the 1950s that explores the effects of racism while also being a compelling horror story. worlds, quite literally in these literary romps, which was not a common option for someone “from the south side of Chicago,” he adds. Soon after, Lovecraft’s prejudice overtly receives attention as the topic of discussion between Tic and his uncle George (Courtney B. Vance), who eventually accompanies Tic to find Montrose while he updates a Green Book for Black travelers in Jim Crow America.

It’s tempting to interpret Tic’s words as tacit approval of giving those like Lovecraft a pass, but that comes at the expense of what Tic says here and what it represents historically: white readers have always been represented while others have to make do with “imperfect” stories handed to them. This lack of options infects all three major characters.

George continually must locate safe places to perform simple tasks like eating and sleeping. Leti (Jurnee Smollett) joins their road trip thanks to a lack of viable financial options as well. And the three of them encounter the clear and present danger of entering a town at sundown while Black – and perhaps some supernatural threats just as horrifying.

At least 2020 has been a good year for series leads Smollett (“Birds of Prey”) and Majors (“Da 5 Bloods”). They’re both great talents effectively utilized here. The pilot leans more on Majors’ Atticus and the mystery surrounding his father’s disappearance, but Smollett’s Leti shines well enough to start and has plenty of room be her own character, not merely a sidekick. Like 2019’s “Watchmen,” “Lovecraft Country” is a second deep dive into a genre often resistant to racial themes. After one episode, it’s hard to imagine the outcome falling short.