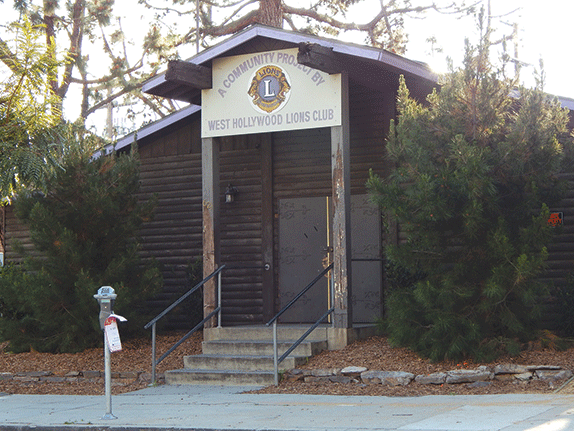 The Log Cabin in West Hollywood has long been home to 12-step programs and meetings for people in recovery. (photo by Edwin Folven)

In-person 12-step meetings are set to resume locally in September thanks to a novel partnership between the city of West Hollywood and the West Hollywood Recovery Center and Log Cabin. Councilman John Duran characterized the decision to allow recovery meetings to resume within the now-vacant six-story open-air parking structure at West Hollywood Park as “the perfect solution.” In April, the council voted to close the park to expedite its renovation.

“No pandemic should ever stop people from having the ability to stay sober and lead productive lives,” he said.

Duran estimated there had been 15,000 individual visits a month to both the Log Cabin and the Recovery Center, which are located across the street from each other on North Robertson Boulevard, before the pandemic began.

West Hollywood Recovery Center Board Chair David Van der Velde said the upcoming outdoor meetings, which are expected to start after Labor Day, if not sooner, would be done in accordance with Los Angeles County health directives for social distancing and other safety precautions.

“At this time, the county’s health orders restrict recovery meetings to a maximum of 10 people. They do not mention outdoor operations,” said Tara Worden, a business development analyst with the city of West Hollywood who has been working with local recovery groups to find space to operate outdoors. “We are working with the county to gain some clarity on how these meetings could be conducted safely outdoors.”

Duran said that the fifth floor of the parking structure, which will be devoted to recovery meetings, is large enough to accommodate two simultaneous meetings. The site will include access to bathrooms on the sixth floor, where the tennis courts are located, as well as four floors of parking. Now two years into construction, Duran predicted it would reopen next year with two swimming pools and a new community center.

Van der Velde, who is also the executive director of Awakenings Recovery home for men, said he anticipated the possibility of holding meetings in the temporary space at least through the end of the year. The Recovery Center had been set to take over operations of the Log Cabin when the COVID-19 pandemic hit and ultimately inked a sublease with the city of West Hollywood for the property on May 4. He said meetings at both recovery locations would resume once the county moves into phase three and declares in-person gatherings to be safe.

After pivoting to Zoom in the wake of the pandemic to hold various 12-step and other “anonymous” meetings related to addiction, Van der Velde said that the online meetings initially maintained roughly the same number of attendees. However, six months later, he said that attendance had dropped to roughly half, about 85% of whom live in the area. Before the pandemic, 7,000 individuals attended meetings at the Recovery Center each month in addition to the 29 meetings a week held inside the Log Cabin.

“I think they’re doing the best they can,” he said, underscoring that in-person interactions are “far more effective” in creating connections. “I believe addiction is about community connection and without that sense of connection and community, I think it’s tough for anyone to get and stay sober.”

Duran said that while the precise amount of the rental agreement for the fifth level of the parking structure had yet to be determined, funds collected would go toward recovery services. He estimated that the city spends roughly $500,000 annually on drug addiction and alcoholism recovery services.

“A whole lot of recovery work happens [in-person] that I think is really important to the soul of the community,” Duran said.

He highlighted the importance of the routines connected with in-person meetings as particularly important, citing the ritual of preparing coffee for the meetings, greeting people in person and even getting dressed to leave the house for some attendees. “You take out one of the cards from the house of cards and you run the risk of bringing down the house of cards,” Duran said.

As a result of the isolation brought on by the pandemic, Van der Velde said that patterns in West Hollywood mirror the national trend of increased slippages, relapses and overdoses. In anticipation of shifting several of the meetings to the parking structure, a decision that will ultimately come down to each individual meeting group, he said that groups will have to decide just how they want to continue now that Zoom meetings are part of the current landscape.

“It will be interesting to see how people deal with the anonymity issue,” Van der Velde said, noting that some groups might opt to hold hybrid meetings. After scheduling meetings for the West Hollywood Recovery Center and Log Cabin, he said that the space would be made available to other organizations for meetings if possible.

“The quicker we can safely get meetings happening in person, the better the overall community will function,” he said.