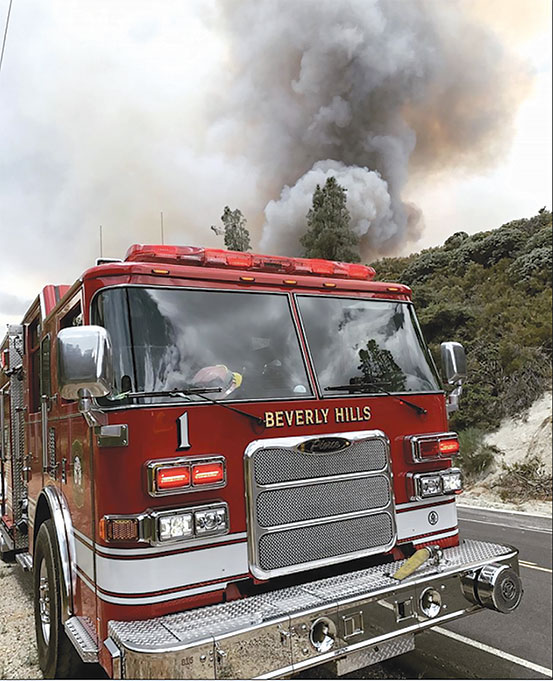 Firefighters from the Beverly Hills Fire Department have been deployed to brush fires in the Angeles National Forest and Northern California during the past two weeks. (photo courtesy of the BHFD)

Firefighters from Beverly Hills and Los Angeles have been deployed to Northern California to battle wildfires raging in different parts of the state.

Being the largest department in the area, the Los Angeles Fire Department is responsible for organizing and coordinating efforts when state fire officials request assistance. Firefighters and equipment are routinely sent to remote locations during fire season to help with many different tasks, from actively fighting fires to protecting structures and providing support. The deployments are covered under a mutual aid agreement between the state of California and county and municipal fire departments.

The LAFD has sent three “strike teams,” spokesman Nicholas Prange said. Each consists of five fire engines and a battalion chief. Four firefighters are assigned to each engine.

Two of the three strike force teams are composed entirely of LAFD firefighters, while one includes an engine each from the Beverly Hills, Santa Monica and Culver City fire departments, as well as LAFD personnel. Because the smaller cities have fewer resources, only one engine is sent from each department. The latest deployment includes firefighters from LAFD Station 61 on Third Street in the Miracle Mile and Station 27 on Cole Avenue in Hollywood, among other stations citywide, Prange said. 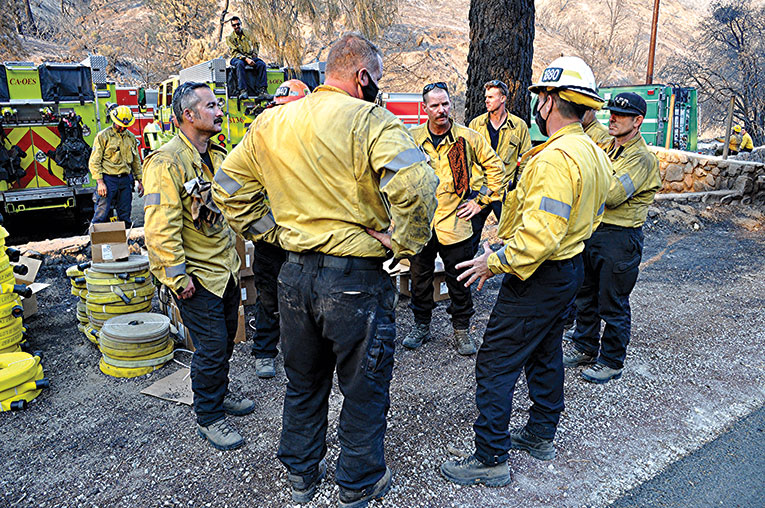 Los Angeles Fire Department firefighters are part of a strike team that has been sent to the Lake Fire in the Angeles National Forest and the Lightning Complex Fire in Northern California. (photo by Rick McClure)

The firefighters volunteer for the assignment and are generally deployed for 14 to 21 days. Sometimes, initial groups of firefighters are sent home and new personnel arrives to staff the equipment already on scene. Resources are deployed and scheduling is arranged so that no single fire station has a reduction in resources and each is ready for any local emergencies that occur, Prange added. The California Office of Emergency Management oversees operations at the individual brush fires and each strike team reports to locations determined by state authorities.

The Beverly Hills firefighters are part of a strike team that was originally deployed two weeks ago to the Lake Fire in the Angeles National Forest north of Santa Clarita, and last Sunday was redeployed to the LNU Lightning Complex Fire in Sonoma, Lake and Napa counties. The other strike teams have been deployed to the SCU Lightning Complex Fire in the mountains east of San Jose. Both fires were approximately 25% to 35% contained on Wednesday and it is uncertain how long the local firefighters will be deployed.

BHFD Battalion Chief Mike Hand said the Beverly Hills firefighters have currently been assigned to defend structures, but that could change quickly depending on needs. He added that the statewide system is important because it works both ways. If a large fire or natural disaster such as an earthquake occurs in the local area, resources from throughout California will be sent to the Los Angeles area.

“One of the reasons the state system is in place is so the state can coordinate the large amount of resources,” Hand said. “They look at what’s going on and decide what needs to be done. It’s a comprehensive statewide effort to mitigate emergencies.”