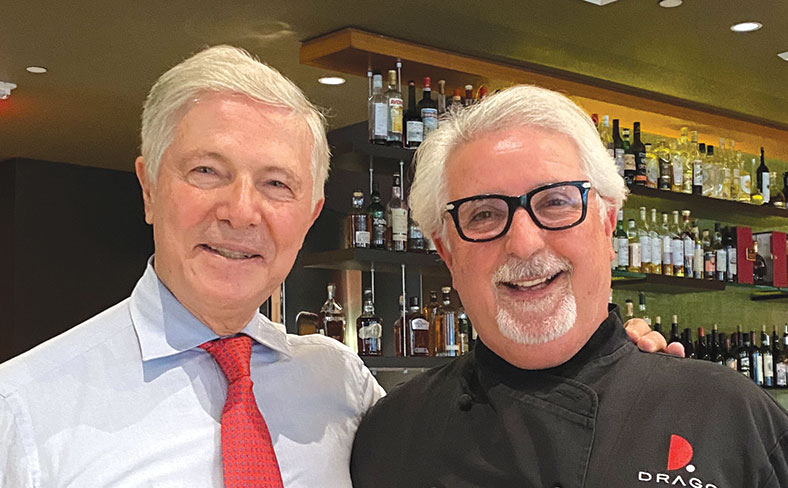 For over 40 years, Restaurateur Piero Selvaggio (Valentino, Valentino Restaurant Group) and Restaurateur/Chef Celestino Drago have been close friends, colleagues and competitors in the Los Angeles dining scene. Now, their long relationship has transcended as Drago has officially welcomed Selvaggio as new managing partner of Drago Centro.

Selvaggio opened Valentino in 1972 in Santa Monica, which was widely regarded as one of the finest Italian restaurants in the U.S. He built a multimillion-dollar restaurant empire garnering numerous James Beard Foundation awards, until the restaurant closed in 2018.

Drago has also created a restaurant empire, which include IL Pastaio, Celestino Ristorante, Drago Bakery, Drago Ristorante and Drago Catering & Special Events. For the past 11 years, Drago Centro has been a premier dining destination in downtown L.A.

“When I first arrived in Los Angeles, there was nothing else like Valentino in Santa Monica, and I always looked up to Piero as a mentor,” Drago said. “Piero helped me out with many of my early ventures and being that we are both from Sicily, we have always had a special respect for one another.”

“I am very excited to bring Drago Centro to the next level in time,” Selvaggio said. “Celestino and I understand each other completely and we are focusing on the future of dining in Los Angeles. I feel the stamina of this new project and I am excited for all of the new things we are going to do together now, and in the future.”

“I am very excited to welcome Piero to Drago Centro,” Drago added. “He is a longtime friend and we are going to have fun together.”