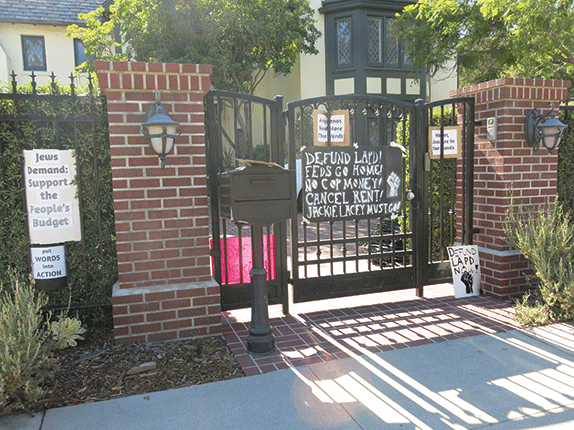 A crowd of multiracial Jews showed up wearing all black to the home of Los Angeles Mayor Eric Garcetti on July 30 to pray, perform rituals, demand that he rescind his endorsement of District Attorney Jackie Lacey and adopt the People’s Budget being pushed by Black Lives Matter-Los Angeles and other groups in the coalition.

The protest was held at the Getty House on the Jewish fast day of Tisha B’Av, which is associated with calamities that have impacted Jewish communities, by LA Jews For Black Lives, which is “a multiracial, multi-gendered community of Jews and allies,” according to a statement released by the organization.

“We have gathered in front of the mayor’s mansion to lovingly call him in as fellow Jews and Angelenos who believe that we all play a vital and important role in ending white supremacy,” the statement said.