It’s never a bad time to watch ‘The Office’ again 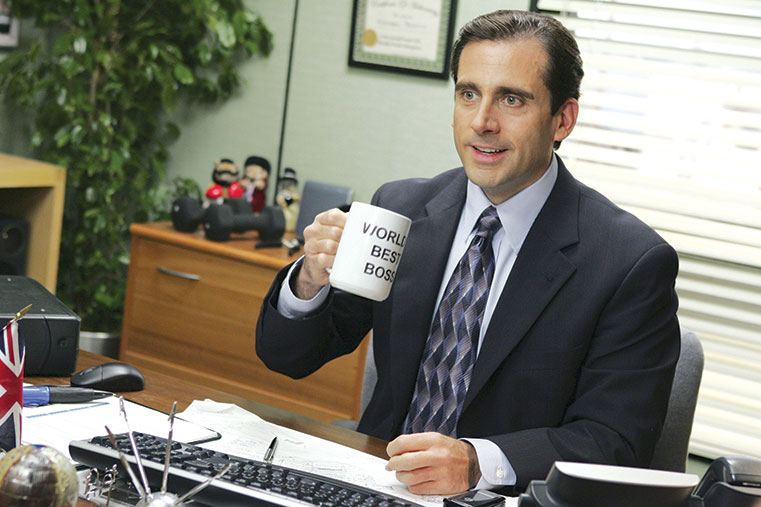 Watching Steve Carell as Michael Scott in “The Office” never gets dull. (photo courtesy of NBC)

My wife and I often debate over what to watch once the twins go down each evening. Sometimes, a new entry wins the day, but that’s a chance that might fail one or both of us. We cherish our private time together. Then add an expected degree of exhaustion that accompanies the day’s busy attempts to entertain 3 year olds. That alone limits our capacity for mentally draining dramas.

Sorry, “Breaking Bad” and “The Wire” won’t make the cut anytime soon. So, when we encounter a show hole or inevitable indifference with the queue, one option always delivers: NBC’s “The Office,” the popular mockumentary about employees at the Scranton, Pennsylvania branch of Dunder Mifflin Paper Company, Inc. Dwight Schrute’s (Rainn Wilson) love of beets. Jim (John Krasinski) and Pam’s (Jenna Fischer) pranks – especially their blooming love, so enviable in its familiarity – and everything with Michael Scott (Steve Carell), king of aloof and sincere simultaneously.

If embarking upon 188 episodes spanning nine seasons sounds like too much, even with all the in-home time many of us must endure, any number of clips on YouTube and the series’ homepage might do the trick. Prank compilations, every time Michael declares “that’s what she said” at the worst possible moment (or splendidly in the finale) and, again, all those cold openings of Jim/Dwight shenanigans. Plus, CPR training in season 5 easily goes down as the funniest five minutes in TV history.

Considering where “The Office” began – a painfully awkward six episodes – the emotional gut punches that eventually arrive are entirely unexpected: Michael standing up for his alternative paper company, Jim’s proposal, Oscar’s (Oscar Nunez) offer to let Angela (Angela Kinsey) move in and Pam’s realization that her parents will divorce not because Jim said the wrong thing to her dad but because his love for her, something poor pops never felt before.

Michael’s final episode as a series regular sports a two-punch. First, when Jim and Michael hold back tears, unsuccessfully trying to remain stoic. Then Pam’s blitz for Michael at the airport. We’ll never know their final words to each other (moments earlier, Mike officially handed over his lapel to the camera crew, wondering if anyone would see the footage some day). Yet again, a series that began as a remake of a very, very dry Brit version, transcends, frankly surpasses, its origins in service of something heartfelt and actually funny.

Few popular network series come close to this. “Parks and Recreation” is up there, but it’s often more endearing than hilarious throughout its run. Perhaps “Brooklyn Nine-Nine” is a worthy predecessor, but a shift from Fox to NBC and shorter seasons make for a less fulfilling ride. So, it’s settled: “The Office” is incomparable, worthy of rewatching forever. 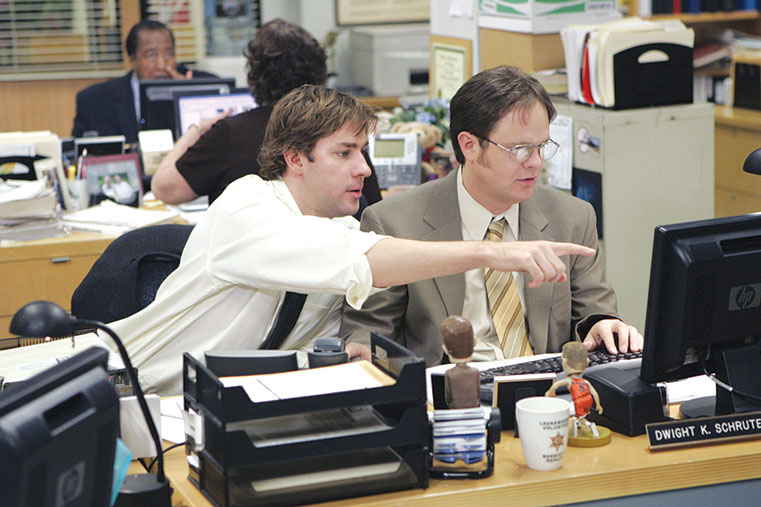 John Krasinski as Jim Halpert and Rainn Wilson as Dwight Schrute are memorable in “The Office,” a timeless hit show. (photo courtesy of NBC)

It also doesn’t hurt that many of the stars seem like delightful folks. Carell is a treasure. Krasinski saved everyone during quarantine with his YouTube show “Some Good News.” And Mindy Kaling, both star of the show and prominent writer, continues to pump out hit series like Netflix’s “Never Have I Ever.”

Certainly, Carell’s exit in season 7 marked an exodus for some fans as well, but I remain convinced everything kept running just fine in his absence. James Spader’s Robert California wasn’t a carbon copy of the previous boss but something entirely new, equally outlandish. Frankly, Michael’s bon voyage allowed others to shine more.

At the end of January 2021, I must confront a dilemma thanks to the tedious streaming wars: do I cave and subscribe to Peacock, NBC’s newly minted platform, the new online home for this sitcom juggernaut? Probably not, but as Dr. Ian Malcolm says in another NBCUniversal creation, “Life finds a way.”

Until then, the wife and I probably have another two rounds in us because “The Office” is that good. Now, it’s time to watch Idris Elba – the international treasure and top Bond pick – play an antagonist VP who doesn’t get along with Michael. Only this show could pull off Elba as a villain.