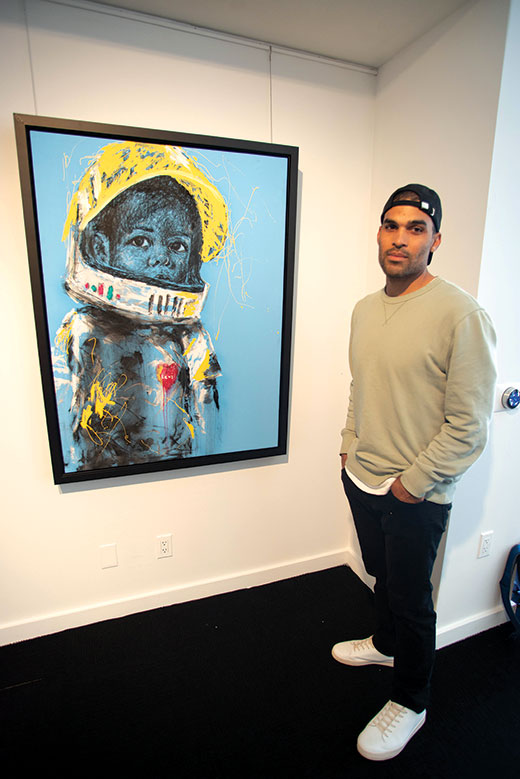 Artist and former professional baseball player Micah Johnson has created an art series featuring his nephews, and through his art, hopes to inspire not only Black youth but all people to follow their dreams. (photo courtesy of Shaun Thompson PR)

Micah Johnson spent 24 years of his life working hard to reach his dream of playing professional baseball. In 2012 he was drafted by the Chicago White Sox and played for their minor league team, the Great Falls Voyagers.

“I started playing when I was about 4 years old,” Johnson said. “It was something that I was obsessed with.”

Johnson had a fruitful career playing for the White Sox, and was later traded to the Los Angeles Dodgers in 2015.  While playing for the Dodgers, his talent for art emerged.

Micah credits Dodgers Manager Dave Roberts for encouraging him to pursue his passion off the baseball field. During a spring training game, Roberts asked him what he liked to do, and Johnson responded, “painting.”

Johnson was later asked to create a painting of Dodgers great Maury Wills, and held one of his first art exhibits at Dodger Stadium.

“My teammates have always been super supportive of [my art],” Johnson said. “A lot of them are still supportive to this day, even if it’s buying or reaching out to tell me how much they enjoy my work. Those relationships have been very important [when I was playing], and [now] painting.”

Johnson retired from professional baseball in 2018 to focus on a career in art. He describes himself as a self-taught figurative artist, and his art series “Mom, Can Astronauts be Black?” is featured at the Art Angels Gallery, 9020 Beverly Blvd., in West Hollywood.

For the series, Johnson created bright and eye-catching portraits of Black youth with three individuals close to his heart – his nephews, two 2 year olds and one 4 year old – using mediums such as charcoal, gouache and pastels.

He took inspiration from the young boys, motivated by their curiosity.

“My nephew had asked his mom if astronauts can be Black. I knew I had a message I wanted to convey, which is there should be no limitations to your dreams.” 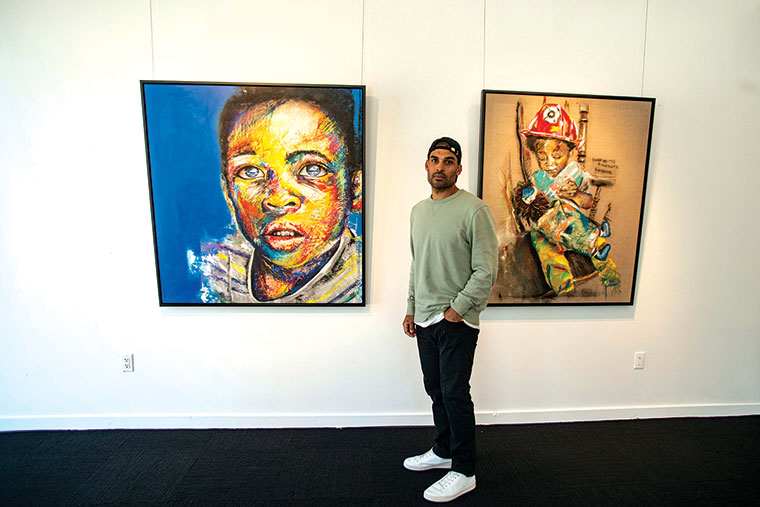 He said he plans to continue painting his nephews until they each turn 18 to capture their life journeys as a real perspective of Black young men growing up in America, he said.

“I want to use this time and platform to convey a message that is near and dear to my heart,” Johnson said. “I want to impact people in a way that I didn’t with baseball.”

Johnson said his art is also a way for him to communicate and address systematic racism and bigotry.

“Art for me is a way to share a message,” Johnson said. I use my art to speak. I think it’s imperative that everybody finds their outlet to express themselves … and [maybe] we’ll start having more healthy conversations.”

Art Angels Gallery owner Jacquelin Napal was first introduced to Johnson by a former teammate who had one of Johnson’s early works in his collection. She offered Johnson a chance to exhibit his art a few years ago but he turned down the offer.

“Putting on a show is a collaborative effort that requires the right energy from all involved. We admire that Micah was able to recognize that it was not the right time,” Napal said. “We knew that when he was ready, the opportunity would present itself and we could not be more honored to be debuting this new series with Micah.”

She added Johnson’s vision has changed entirely from where it was before, and the timing and message for his series could not be more perfect for the gallery.

“The message and symbolism in each of Micah’s works, as well as the series in its entirety, are very important to us,” Napal added. “As mothers and gallerists, our hope has always been to use our platform as a way to inspire the future youth through powerful exhibitions, donations, and artist classes. Micah’s message is so important and powerful, and we look forward to ensuring it gets heard.”

Napal said the gallery first released the works online and then followed with a full, in-person exhibition while adhering to all health and safety guidelines.

Johnson said he is proud of his work and that his art career has been met with love from his family, friends and the art community.

“Here I am living two dreams,” Johnson said. “I accomplished one dream and I’m onto another one. I have a lot of projects coming along, just keep following along with me.”

Online seminar explores positivity of pets as therapy for trauma

Book illustrates the secret life of the Beverly Hills teenager