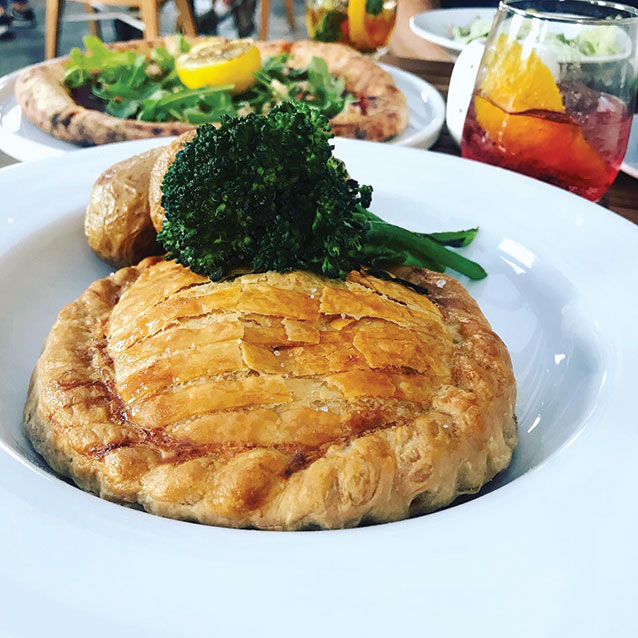 Traditional meat pies, fish and chips and interesting pizzas are all on the menu at hte new Market Tavern at the Farmers Market. (photo by Jill Weinlein)

Gary Twinn is an affable presence around the Original Farmers Market at Third and Fairfax. This charismatic British expat moved to the U.S. in the ‘90s to pursue a musical career. For the past 10 years, he has been the bar manager at E.B’s Beer and Wine, named after the market’s founder, Earl Bell Gilmore. Twinn also manages Farmers Market Bar 326, and performed and booked live music on the West Patio before COVID-19.

Twinn always dreamed of opening a lively British pub in the former Johnny Rockets space, and when its latest occupant closed, Twinn approached the market’s management about opening a pub. Finding favor, he then spoke to well-known chef Brendan Collins of Fia, Birch, Waterloo & City, who agreed to help launch the venture.

Collins, a fellow Brit from Nottingham, is classically trained in French technique and puts an elevated spin on British fare. I first met Collins in 2016 at Birch on Cahuenga in Hollywood and gave him a stellar review in the Beverly Press.

With Twinn as the (properly masked) front man and Collins in the kitchen, Market Tavern is elevating British bites true to its menu’s promise, “just like your mum used to make…but better.”

The space has a distinctive U.K. rock ’n’ roll vibe, with one wall displaying an artful collage of British movie and concert posters, and British album covers screenshot on the side of the pub menu. Twinn curated the background music that includes songs by well-known British bands the Who, the Rolling Stones and the Kinks. He said live music performances would eventually begin happening outside on the nearby patio.

“Brendan and I wanted to create a dining experience where guests feel as if they just walked in off a street in Chelsea, only with much better weather outside,” he said.

The menu includes an array of British pub standards prepared with their own particular twists like fish and chips, bangers and mash with onion gravy, full English breakfast with all the fixings and five different savory pies served with minted whole new potatoes and seasonal greens. Twinn highly recommended we order the British pies on the menu. “They are Collins’ specialty, not just any ordinary British pies,” he said.

Our server, Molly, wearing a face mask and clear plastic face shield for added protection, introduced herself and recommended we start with one of their specialty cocktails. We opted for a refreshing Pimm’s Cup made with amber colored Pimm’s No 1, ginger ale, mint and cucumber, along with Take the Mickey, which is similar to an Aperol Spritz made with Prosecco, Lo-Fi Amaro and a double orange peel twist. It offered the aroma and flavor of sweet citrus fruit with hints of ginger and spice. 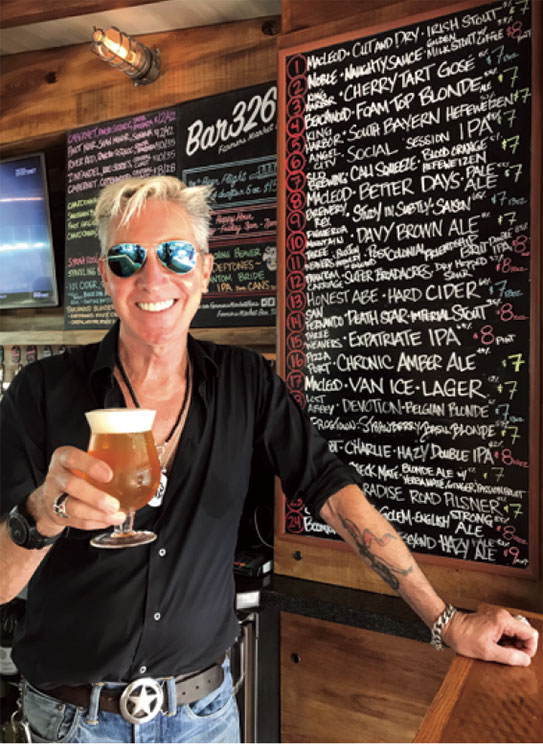 You may recognize Gary Twinn from Bar 326 at the Farmers Market, now running the Market Tavern. (photo courtesy of Gary Twinn/Bar 326)

Twinn, a beer aficionado, curated an interesting list of craft beers that are categorized from light and crisp, toasted and nutty, hoppy beers, brown ales, and dark and roasted stouts. He also lists sangria ciders, sour ales and a tart and funky hard kombucha. The wines are mostly from California, and the sparkling wines and champagnes are from France and Italian wineries.

We started with cauliflower, enhanced with chimichurri made with chopped parsley, minced garlic, olive oil, oregano and red wine vinegar, and avocado. The Brussels sprouts arrived in a cast-iron dish with crispy and airy pink and white prawn crackers on top. Each sliced sprout was soft and glazed with a pleasing Thai dressing.

The lobster pizza was sensational with a thick outer crust, blistered from the heat of the oven, while the center was thin and layered with garlic butter, San Marzano tomatoes, mozzarella and pieces of Maine lobster dotting the top. Other pizzas include a Margherita, spicy Italian sausage, wild mushroom and arugula, and Brussels sprouts with smoked bacon, cream and a fried egg on top.

My husband ordered an Old Speckled Hen English Pale Ale to enjoy with his Billingsgate fisherman’s pie filled with generous pieces of seafood in a creamy sauce. Another pie on the menu is filled with tender pieces of steak cooked with vegetables and English ale, then expertly wrapped in a flaky buttery crust.

Large plates and share items include Collins’ enormous fried fish and chips. A huge piece of local rockfish is drenched in beer batter and fried golden brown and crispy. It rests on top of thick hand cut chips (fries) and is served with a container of house-made tartar sauce and ketchup.

On Sundays, Collins prepares his traditional Sunday roasts, just like he did at Birch. From noon to 4 p.m., walk into Market Tavern and you might overhear an array of British accents enjoying a pint along with their traditional Sunday meal. Depending on the day, diners might enjoy comforting oven-cooked roast beef with horseradish, half a roasted chicken with sage and onion stuffing, or lamb leg with a mint sauce, each with all the trimmings including peas, roast potatoes, gravy, a couple small Yorkshire puddings – or “Yorkies” – carrots, cauliflower and Brussles sprouts.

For those looking for vegetarian and vegan dishes, Collins makes Beyond Meat Bangers and mash with onion gravy, as well as mushroom “steak” and chips with tomato, watercress and avocado.

For dessert, Collins’ sticky toffee pudding features a moist cake with a fabulous caramel toffee sauce, along with a scoop of caramel ice cream for a toothsome ending.

Sign up for fun fall programs in Beverly Hills