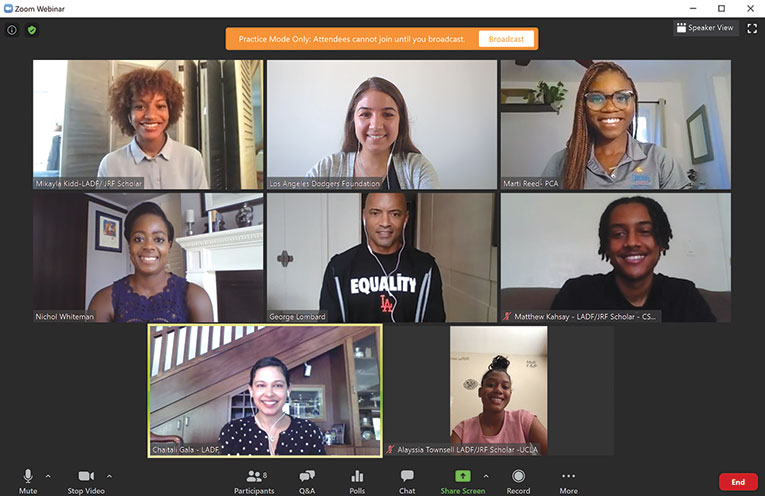 As part of a week-long celebration of Jackie Robinson, LADF hosted a conversation with Dodger First Base Coach George Lombard an Jackie Robinson Foundation/Dodgers Foundation Scholars. (photo courtesy of the Los Angeles Dodgers)

The Los Angeles Dodgers and Dodgers Foundation are celebrating Jackie Robinson’s life and legacy with online programs leading up to Major League Baseball’s on-field observance of Jackie Robinson Day on Friday, Aug. 28, the date in 1945 when Robinson first met with Dodger President Branch Rickey in his Brooklyn office as Rickey sought to sign the first Black player to the Major Leagues.

The Dodgers will play the Texas Rangers in an away game on Friday, but will celebrate Robinson and his lasting impact on society at the game and with virtual programs. Today, Aug. 27, at 5 p.m., the LADF will continue its Virtual Coaches Training Series presented by Nike with former Dodger player Chase Utley as guest speaker. Utley will discuss his approach to coaching young athletes and will reflect on Robinson’s legacy, and their shared path from UCLA to the Dodgers. The training will also feature Megan Bartlett, founder of We Coach, which offers resources on youth development, preventing trauma and coaching girls. Coaches and parents from LADF’s sports-based youth development program will participate, along with Dodgers RBI program partners, local school districts and youth development professionals.

On Aug. 28. Major League Baseball will celebrate Jackie Robinson Day at ballparks around the country. Jackie Robinson Foundation and LADF Alumni Scholar Johnathan Kidd will throw a virtual ceremonial first pitch prior to the Dodgers’ game.

Rangers and Dodgers players and coaches have collaborated on a video honoring Robinson’s legacy that will be shown prior to the game on video boards at the Rangers’ stadium. Cutouts in the audience that night will feature photographs of Jackie Robinson Foundation Scholars and Texas Rangers MLB Youth Academy participants.