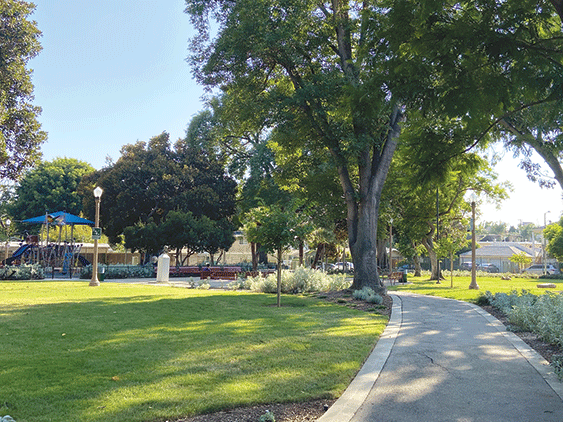 The playground improvements at De Longpre Park were finished last year, and security enhancements were added this year. (photo by Edwin Folven)

De Longpre Park, one of the oldest neighborhood parks in Hollywood, recently reopened after extensive renovations were completed.

Featuring a statue of actor Rudolph Valentino as its centerpiece, the 1.4-acre park was renovated with new landscaping, benches, drinking fountains, fitness equipment, trash cans and pet waste receptacles. A new playground was previously installed during an earlier phase of the renovations last year. The latest improvements also include security enhancements such as better fencing and entry gates, security cameras and street lights on both sides of June Street, which runs along the east side of the park at 1350 N. Cherokee Ave.

The renovations were spearheaded by Los Angeles City Councilman David Ryu, 4th District, and the Central Hollywood Neighborhood Council. The playground was renovated with $400,000 in Quimby funds, which are funds paid by developers for community improvements when projects are approved. The latest improvements were funded by $250,000 in funds repurposed from the now-defunct Community Redevelopment Agency-Los Angeles.

“City parks were my backyard when I was growing up in Los Angeles. For a lot of Hollywood families, De Longpre Park is the only place nearby to get outside and enjoy some green space,” Ryu said. “That’s why it was so crucial we invested in this shared space, and why I got to work with the Central Hollywood Neighborhood Council and Department of Recreation and Parks to make De Longpre Park the best it can be.”

Ferris Wehbe, vice president of the Central Hollywood Neighborhood Council, said the renovations were sorely needed and the council advocated for the project. In the late-1980s and early-1990s, a lot of criminal activity occurred in De Longpre Park, Wehbe said. Now, it is a welcoming neighborhood space, he added.

“Things have definitely improved. It’s a very important resource,” Wehbe said. “Councilmember Ryu brought this project to fruition, however, we were involved in providing support.”

Wehbe said the council had hoped for a “dog run” feature where people could have dogs off-leash, but the city determined that was not feasible. The park is located in an urban neighborhood south of Sunset Boulevard and east of Highland Avenue and did not meet city criteria for an off-leash dog park, one reason being large groups of dogs could disrupt residents of nearby apartments and residences, Ryu’s spokesman Mark Pampanin said. Park visitors are welcome to bring dogs, but they must be kept on leashes.

Built in 1924, the park is one of the oldest in Hollywood, Pampanin said. It is named after painter Paul de Longpre, who once lived in a house in the neighborhood and had gardens that attracted visitors to the area. Valentino, another former resident of the neighborhood, is memorialized with a statue titled “Aspiration” in the center of the park. The statue features a figure with his face uplifted to the sky was installed in 1930 to memorialize the actor, who died in 1926, according researcher Allan R. Ellenberger, who authored an article on the statue published on his Hollywoodland website.

Pampanin added that Hollywood history is an important component of the park, and encouraged people to visit and see the new amenities.

“It really is a park and a historical space dedicated to the early days of the film industry,” Pampanin added. “We hope people enjoy it.”

Warning issued about victims being targeted for computer virus scams