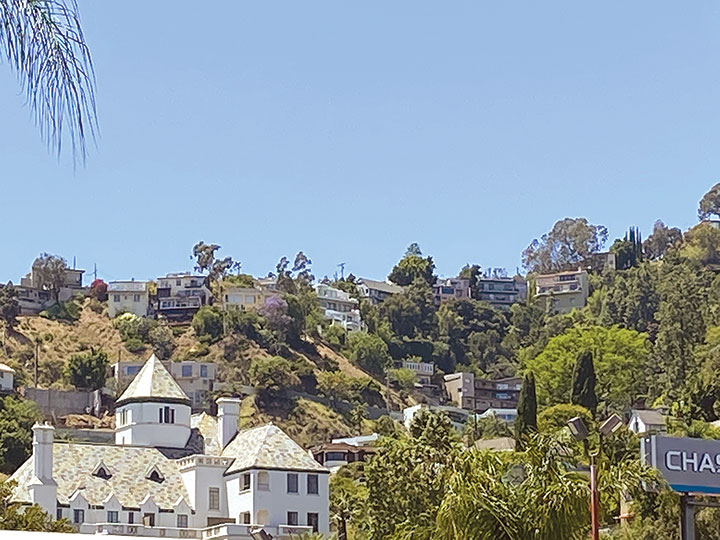 The city is looking at more ways to rein in house parties in the Hollywood Hills, particularly during the COVID-19 pandemic. (photo by Edwin Folven)

In response to large parties at rented houses in the Hollywood Hills in violation of public health orders during the COVID-19 pandemic, Los Angeles City Councilmen Paul Koretz, 5th District, and David Ryu, 4th District, are partnering on a plan to place new limits on short-term rentals often used to host the gatherings.

The councilmen introduced a motion on Aug. 12 that would prohibit short-term home-sharing rentals citywide in residences with more than six habitable rooms and a total of 3,000 square feet. The new plan would also limit short-term rentals to 10 guests per site, and would prohibit valet and catering services, live entertainment, amplified music and DJs, tents and dance floors at the properties.

Ryu has been trying to rein in loud and disruptive parties in the Hollywood Hills for several years and spearheaded a law in place since 2018 that allows the city to cite and fine property owners of problematic residences, as well as people renting the homes and hosting parties. The new approach would take the restrictions a step further by limiting the number of people and what they can do in short-term rentals.

“This is another key step in shutting down problem house parties and keeping people safe,” Ryu said. “We must go further to keep home-sharing safe during the COVID-19 pandemic and stop homeowners who rent out their home to party promoters. I’m proud to join Councilmember Koretz in bringing this legislation forward.”

Koretz, who like Ryu also represents a large portion of the Hollywood Hills, said the parties during the pandemic are dangerous to the public. He cited a large party at a mansion in the Beverly Crest area on Mulholland Drive on Aug. 3 where a woman was shot to death and others were injured, as well as large disruptive gatherings at short-term rentals throughout the city.

“I think things are out of control and it’s one of the things that could impact our ability to fight off the coronavirus by taking logical steps until we have medications or vaccines that we know will work. Anywhere where we are generating significant spread flies in the face of that effort,” Koretz said. “We are seeing some giant parties that are large enough to see by news helicopters with hundreds of people attending, and we are also having some middle-level ones where you might have 50 to 100 people in somebody’s backyard without it being a 20,000-square-foot mansion. I think we need to take all short-term rentals into account, because many of these [parties] are held at those properties. We are talking about banning short-term rentals of the kind that would generate that type of party.”

The motion was introduced last week but has yet to be assigned to a City Council committee, according to Koretz’s spokeswoman Ali Simard. However, there is an urgency clause in the motion that calls for it to be considered as soon as possible, and allows an interim control ordinance to be implemented immediately once council approval is granted.

“The [interim control ordinance] starts by making sure large homes can’t be rented to too many people at the same time,” Koretz said.

The motion is among steps being taken to address the parties. After the party in Beverly Crest, Mayor Eric Garcetti authorized the Los Angeles Department of Water and Power to shut off service to homes where repeated violations from parties have been documented. The Los Angeles Police Department’s Hollywood Division also has a dedicated unit assigned to address loud parties on weekends, and officers are responding to complaints and proactively looking for disruptive gatherings.

On Aug. 19, Garcetti announced that the LADWP disconnected service at a house in the Hollywood Hills that had been the site of two large parties in August. The LAPD visited the property when the parties occurred and two warnings were issued before the LADWP shut off service.

“With more than 2,000 Angelenos – and over 170,000 Americans – lost to COVID-19, we need every resident to undertake critical safeguards to stop the spread of this virus. That includes not hosting or attending parties that put themselves, their neighbors and many others at risk,” Garcetti said. “Despite several warnings, this house has turned into a nightclub in the hills, hosting large gatherings in flagrant violation of our public health orders. The city has now disconnected utilities at this home to stop these parties that endanger our community. If we wish to reopen more businesses, return our kids to school or get back to our normal lives, we must continue to wear masks, wash our hands frequently and as we’re emphasizing today, avoid gathering with others. All of these actions save lives.”