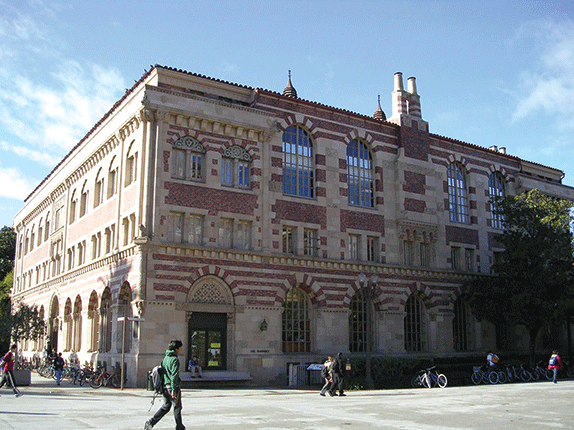 Earlier this month, Rose Ritch, a student-government officer at USC, resigned her post after she faced criticism for supporting Israel. (photo by Padsquad/courtesy of Wikimedia Commons)

The council’s vote followed the Aug. 5 resignation of University of Southern California senior Rose Ritch, the vice president of the Undergraduate Student Government at USC. In her resignation letter, Ritch, who is Jewish, said she was criticized for her support for the state of Israel, which some other students denounced as racist against Palestinians.

USC President Carol Folt said in an open letter that Ritch faced “toxic conditions,” “anti-Semitic attacks on her character” and “online harassment” before Ritch announced that she would step down.

All five Beverly Hills council members denounced the criticism of Zionism – support for the state of Israel – and said anti-Semitism is treated differently than other forms of racial and ethnic hatred.

Mirisch and other council members pointed out that USC is home to the USC Shoah Foundation, an organization that collects the testimonies of survivors of the Holocaust and other genocides in an effort to prevent future tragedies, and has a strong connection to the Jewish community in Beverly Hills.

“When this happens at USC, which is a university that many of our children and friends attend, it is more than a bit saddening and shocking,” Mirisch said.

Mirisch also criticized Folt not doing more to fight anti-Semitism on campus beyond writing her letter, saying she “simply condemned it, and didn’t actually do anything beyond that.”

Councilman Julian Gold echoed the city staff report in pointing out that in 2019, a similar situation engulfed the University of California Los Angeles when a guest speaker, professor Rabab Abdulhadi of San Francisco State University, “described the state of Israel as a racist endeavor, denied its right to exist and labeled Zionists as white supremacists,” according to the staff report.

When a student, Shayna Lavi, “challenged Abdulhadi during the class, [she] was verbally harassed by Abdulhadi” and Kyeyoung Park, the professor who invited Abdulhadi to speak, the staff report added.

“We see this at every major university in the United States, where this sort of behavior is tolerated,” Gold said. “If you were to turn this around and pick a different minority and do the same thing against them, there would be this huge outcry, but for some reason, if it’s the Jewish community, if it’s Israel, it’s kind of OK … This is systemic, it’s endemic in the university system.”

Vice Mayor Robert Wunderlich said the incidents at USC and UCLA are “especially inappropriate for universities.”

“The pattern of behavior is that for some reason, discrimination against Jews seems to be more acceptable than discrimination against other minorities. It shouldn’t be tolerated at universities, it wouldn’t be tolerated in the city, and it’s appropriate for us, with our community, to be issuing the strong declaration that we are,” Wunderlich said.

Mayor Lester Friedman, a graduate of UCLA who worked as a staff member for the men’s basketball team under legendary coach John Wooden and who serves as the official scorer for the team, agreed that the council needs “to do everything that we can to stop” anti-Semitism.

“USC was the most recent, but it happened at my alma mater, UCLA, and that’s embarrassing for me,” Friedman said.

Gold encouraged the Jewish community to cease their donations to colleges and universities that refuse to do more to combat anti-Semitism.

Councilwoman Lili Bosse added that, as a daughter of Holocaust survivors, she was “mortified that this is taking place at USC.” She also asked for everyone to cease donating to colleges and universities that will not do more to fight anti-Semitism.