Beverly Hills will light up for holiday season 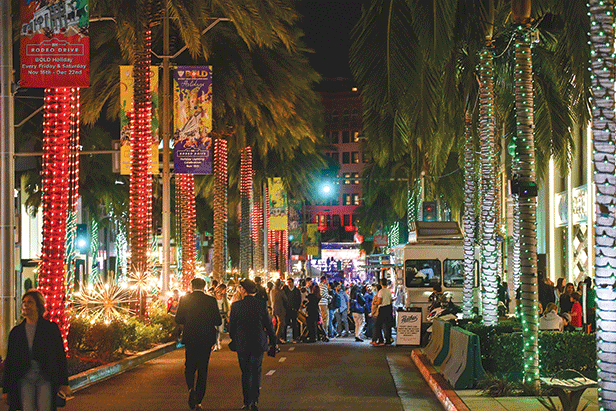 While the crowds aren’t expected, Beverly Hills still aims to decorate the city for the holiday season. (photo courtesy of the city of Beverly Hills)

In a unanimous vote on Aug. 18, the Beverly Hills City Council approved its fiscal year 2020-21 capital improvement program budget, which illustrates the effects of the ongoing coronavirus pandemic and its economic impact on the city.

The CIP budget was considered separately from the rest of the city’s budget, which was approved in June. The council also voted earlier this month to allocate $1.2 million for the purchase and installation of security cameras as part of the CIP budget.

This year’s CIP budget is $73.8 million, though $15 million of that is earmarked for the Metro Rodeo Station North Portal Project, which aims to install a station entrance north of Wilshire Boulevard that would provide easier access to the Business Triangle – including Rodeo Drive – for riders once the Wilshire/Rodeo station is completed as part of the Purple Line Extension.

In addition to that reduction, Beverly Hills reduced last year’s CIP budget by $24.4 million so that $6 million could be put toward the general fund. Impacted projects included the Santa Monica Boulevard Corridor project, which was reduced by $8.3 million; $3 million for police facility upgrades; and maintenance and improvements for Fire Station 3 that would have cost $1 million.

However, the budget allows for some maintenance and upgrades. For instance, $650,000 will be set aside for seismic rehabilitation for the City Hall tower, with additional funding expected in fiscal year 2021-22; $13 million will be used to design and drill new groundwater wells in the La Brea Basin; and $4 million will be used to rehabilitate and waterproof the city’s concrete parking facilities. Millions of dollars in funding is also available for sidewalk, street, tree and water main and hydrant repairs, replacements and improvements.

Councilman John Mirisch, who advocated for more cuts to the city’s budget in June, said he supported the CIP budget as it was presented, as he did not see any overspending.

“A lot of it is maintenance, which is important. It’s that old adage of ‘you can pay me now or pay me later,’ and it’s all at a reasonable level,” Mirisch said.

While only one year of the CIP budget is approved at a time, city staff also presented a five-year plan that estimated how much funding is expected in future years. Many of the projects that saw reduced funding this fiscal year are expected to receive more funding next fiscal year, when many hope the economy will have improved. Mayor Lester Friedman, who served with Vice Mayor Robert Wunderlich on the council’s COVID-19 Budget Ad Hoc Committee, referenced Mirisch’s use of “pay me now or pay me later” when explaining the decision to plan for more funding next year.

“It’s really ‘you can pay me now or pay me more later,’ but we were careful about not excluding payments for the future. We don’t want to pay more later because we’re not doing something now, and we were very careful and considerate of that,” Friedman said.

The council members also praised city staff for their work in adapting the CIP budget during the coronavirus pandemic while keeping many city priorities funded, such as expanding the city’s network of security cameras.

“I’m pleased to say that there are enhancements here that we know are important, especially those surrounding public safety … all embedded in this capital budget,” Councilman Julian Gold said.

Also included in the budget was $1.3 million for holiday decorations and decorative lighting, which several business owners and advocates for local retailers supported during the public comment portion of the meeting. The original budget for the decorations and lighting was $1.8 million, but with changes to Metro construction, the city will not have to spend $200,000 to relocate its Santa pole that is typically part of the holiday celebrations. In addition, city staff “also determined that current Los Angeles County Department of Health regulations make it unlikely that large gatherings of any kind will be permitted in 2020,” allowing the city to save $300,000 on a holiday stage show event, according to the staff report.

Despite the challenges posed by COVID-19, the retailers said the lights could continue to attract shoppers later this year, even if pedestrian activity is limited and people could only see the lights and decorations from their cars.

“We feel the lighting of our city could be more important this year than in any year that we’ve had it,” said Todd Johnson, president and CEO of the Beverly Hills Chamber of Commerce.

Several retailers added that the lights and decorations could provide an emotional lift for people during a difficult time, a sentiment echoed by Councilwoman Lili Bosse.

“Now more than ever, we need to show that Beverly Hills is open, we’re resilient, we’re safe and welcoming. We can’t go dark … As we hit the holiday season and as we begin a new year ahead, we do it with light and brightness and positivity,” Bosse said.