‘Ballad of Emmett Till’ cast reunites for online reading 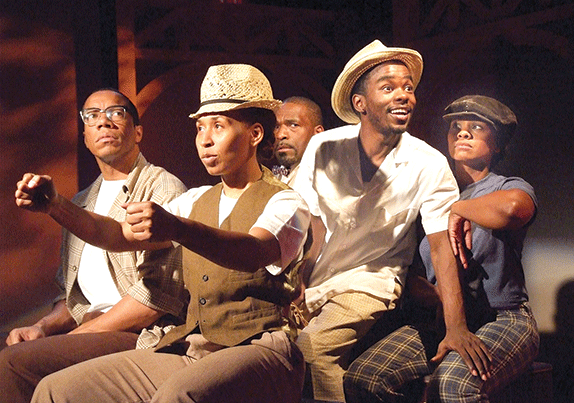 The cast and director of “The Ballad of Emmett Till” are reuniting 10 years later to commemorate the 65th anniversary of Till’s death. (photo by Ed Krieger/courtesy of the Fountain Theatre)

The original director and cast of the Fountain Theatre’s 2010, multiple award-winning production of “The Ballad of Emmett Till” by Ifa Bayeza will reunite for a livestreamed reading of the play on Friday, Aug. 28, which marks the 65th anniversary of Till’s murder. The reading will take place at 4.p.m. and be available for viewing at fountaintheatre.com/fountain-digital/the-ballad-of-emmett-till-2020. Tickets are $20.

In August 1955, 14-year-old Till was visiting relatives in Money, Mississippi, when he was accused of whistling at Carolyn Bryant, a white woman who was a cashier at a grocery store. Four days later, Bryant’s husband, Roy, and his half-brother, J.W. Milam, kidnapped Till, beat him and shot him in the head. The men were tried for murder, but an all-white, male jury acquitted them. Till’s murder and open casket funeral galvanized the emerging Civil Rights movement. Bryant recanted her story in 2017, admitting that the court testimony she gave more than six decades prior was false and stating, “Nothing that boy did could ever justify what happened to him.”

“As America is now being challenged to face its racist history, I can think of no project more worthy,” Fountain artistic director Stephen Sachs said. “In addition to being the 65th anniversary of the murder, Aug. 28 also marks the 57th anniversary of the historic March on Washington in 1963, and a 2020 march on Washington is being planned this year, on that date as well.”