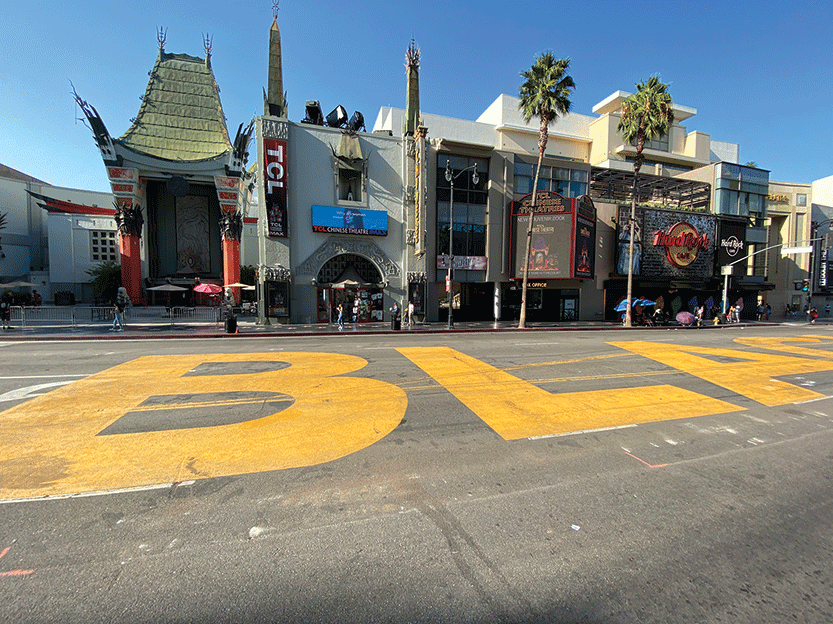 Crews are working this week to create permanent street art in the middle of Hollywood Boulevard commemorating the All Black Lives Matter demonstration and march, which drew hundreds of thousands of people to the area on June 14.

Los Angeles City Councilman Mitch O’Farrell, 13th District, participated in the demonstration and sought ways to permanently mark the historic march that started on Hollywood Boulevard and ended in West Hollywood. Last week, the City Council approved the permanent street art project. Hollywood Boulevard has been closed since Monday between Orange Drive and Highland Avenue to accommodate the work, which includes new street surfacing, restriping and the installation of the permanent art, and will reopen on Sunday, Aug. 30.

“As the site of the first nationally recognized gay pride parade in the nation, Hollywood must be and will be the safe space designated for this landmark distinction,” O’Farrell said. “I want to thank StreetsLA, the Department of Transportation, the Department of Cultural Affairs, the Los Angeles Transgender Advisory Council and most importantly, members of Black LGBTQ+ Activists for Change for their collaboration and partnership to bring this permanent landmark to the 13th District.”

Members of the Black LGBTQ+ Activists for Change, which organized the march, have shown support for the permanent marker. Last Friday, O’Farrell and members of the Los Angeles Department of Transportation joined representatives from Black LGBTQ+ Activists for Change to dedicate an official sign commemorating the march. The sign reads, “All Black Lives Matter, March For All Black Lives And Black LGBTQI+ Rights, Dedicated To Transgender People Of Color, June 14, 2020.”

“The installation of the All Black Lives Matter commemorative sign on Hollywood Boulevard was extremely emotional for me as a Black trans man,” said Luckie Alexander, the artist who created the All Black Lives Matter street art and a BLAC member. “This is something that will let our Black LGBTQ+ community, especially our Black trans siblings, know they are seen, valid and valued. This act by Councilmember O’Farrell and his team, backed by the city of Los Angeles, gives me hope that we are not fighting alone as a community.” 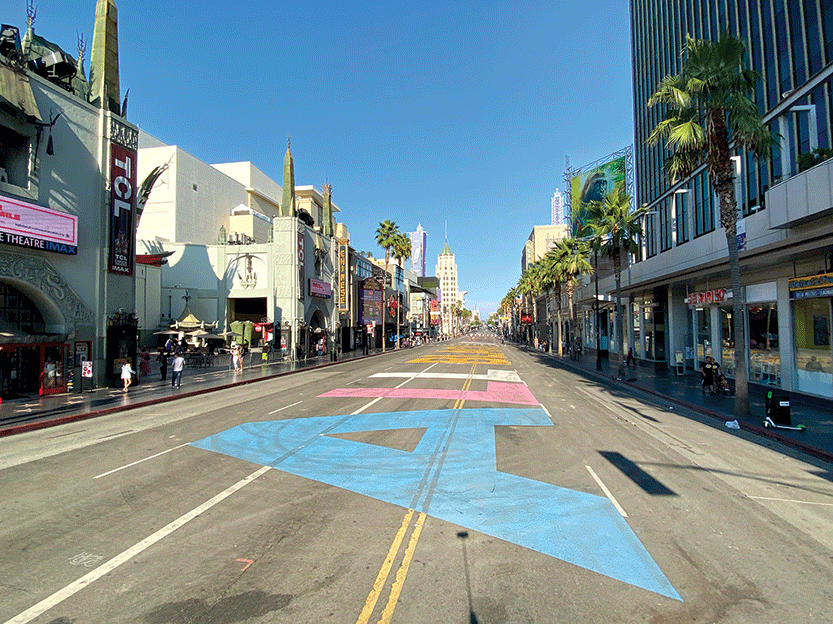 The new permanent street art will be similar to the giant, multi-colored temporary art spelling out “ALL BLACK LIVES MATTER” that was painted on the street by organizers on June 13, the day before the historic march. Since then, O’Farrell had the center section of the street where the words were painted blocked to traffic while the city considered creating a permanent marker. The councilman stressed the importance of the art, which memorializes members of the transgender community.

“After years and years of violence against our Black and queer communities, we are creating the first memorialized space in Los Angeles dedicated to transgender people of color,”  O’Farrell said.

“Acknowledging the historic event in June, while elevating the conversation about the experiences of transgender and queer people of color, is critical as we progress in the movement to ensure the visibility of our community,” added Karina Samala, chair of the Los Angeles Transgender Advisory Council. “Thank you to all who worked to see this project realized.”