AIDS Walk LA makes an impact as a virtual event 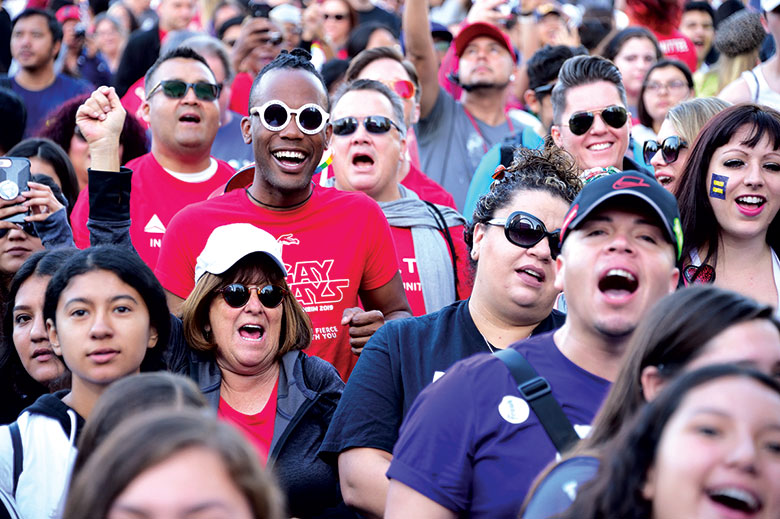 Tens of thousands of people participated in the 2019 AIDS Walk Los Angeles and contributed to the fight against HIV and AIDS. (photo by Donna Aceto/courtesy of APLA Health)

Since its inception in 1985, AIDS Walk Los Angeles has inspired hundreds of thousands of people to walk in support of the fight against HIV and AIDS, and millions more to donate to the cause.

Even in the middle of the COVID-19 pandemic, AIDS Project Los Angeles Health, which organizes AIDS Walk Los Angeles, has received an outpouring of support. Due to the pandemic, APLA Health organized its first online AIDS Walk LA 2020, an online campaign. The digital “walk” has been transformed into a fundraiser highlighting the theme “Get With the Programs.”

The campaign illustrates APLA Health’s programs dedicated to the well-being of the LGBTQ+ community and individuals living with HIV/AIDS. The digital event ends on Sept. 13.

“COVID-19 has changed the way we have lived our life, but AIDS Walk Los Angeles is a one-of-a-kind show of strength from a diverse community that doesn’t back down, not even this year. We may not be able to gather as we normally would, but we can still end the HIV epidemic together,” APLA Health CEO Craig Thompson said in a statement. “COVID-19 has once again highlighted the health disparities that exist in our community. Both the novel coronavirus and HIV are affecting Black and Latinx communities at disproportionate rates.”

Participants can choose their “walk” from APLA Health’s three primary service categories – care, support and education. They will receive and distribute content directly tied to their category that can be shared with friends, family and sponsors about the program they are most passionate about, according to a press release.

“I’m an out gay man. The HIV epidemic started a year after my birth,” Medina said. “I sort of made it my life’s mission to work and help more people living with HIV. This year’s [AIDS Walk LA] is still happening and we are taking precautions.”

Although there will be no physical walk, people are still encouraged to walk in their neighborhoods while remaining 6-feet apart, wearing face coverings and adhering to public health guidelines.

Medina added that AIDS Walk LA was one of the first fundraising walks organized in the fight against HIV. In 2019, walkers and supporters raised more than $1.8 million. Since 1985, the walk has raised approximately $90 million for those in need, such as Los Angeles resident Lily Anderson.

Anderson is a trans woman who transitioned in 2018. She said prior to her transition, she suffered from physical, mental and emotional distress.

“I had no support. If someone had asked me ‘where do you see yourself in five years?’ There was a blank,” Anderson said. “I had a feeling I was going to die young.”

But Anderson was able to connect with mental health services through APLA Health.

“I would not be alive without them,” Anderson said. “APLA Health saves lives. Donations help save people like me.”

AIDS Walk LA and APLA Health has helped many people throughout the years, Medina said. The walk was first held at Paramount Studios until 2001, when it was moved to West Hollywood because of security concerns at the studios after the Sept. 11, 2001, terrorist attacks. AIDS Walk Los Angeles later relocated to Grand Park in downtown L.A. in 2016.

West Hollywood City Councilman John Duran said the city was a logical choice to host the event when changes were needed in 2001.

“They were looking for a host and West Hollywood stepped in,” Duran said. “West Hollywood has always played a central role in fighting disease and fighting homophobia.”

Duran, who is HIV positive, added that he is glad to see the walk continue during the pandemic. He has an extensive personal history advocating for the LGBTQ+ community and for individuals living with HIV/AIDS. His activism and work were motivated by the death of his friend, Scott Fleener, who died from complications caused by AIDS in 1985

“He was the first friend that I lost,” Duran said. “There were 100 of us doing it [advocacy work], but that is what motivated me – a loss of a good friend.”

Duran said AIDS became the “scarlet letter.” Individuals who were diagnosed with HIV could no longer hide their sexuality.

The HIV/AIDS epidemic radicalized the LGBTQ+ community, but it also changed how society accepted them, Duran said. People had to come out of the closet, and it made society realize brothers, coworkers, lifelong friends and loved ones were LGBTQ+, Duran said.

Duran added that AIDS Walk LA is very heartening and a form of radical action. The first walk held in West Hollywood in 2001 was the most memorable for him, Duran said.

“I remember getting on that stage and just years before, I was down in the crowd,” Duran said. “It was incredible to see a sea of Angelenos ready for the walk. I was always more impressed with the thousands of people who were ready to walk, many of whom were not gay, not LGBTQ but just people across L.A. joining for one cause.”