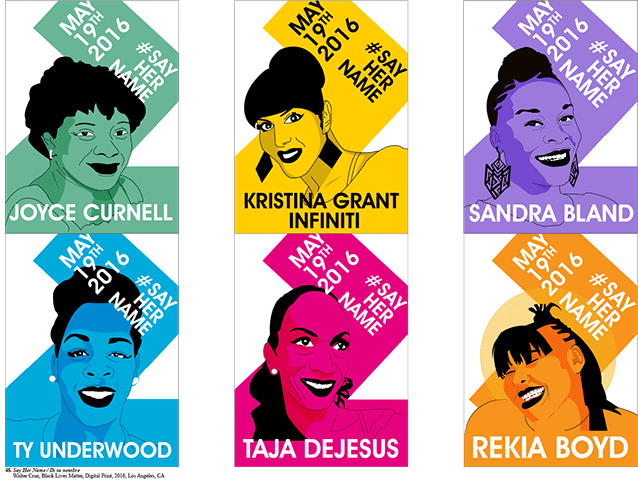 The 18th Street Arts Center presents an exhibition in its Airport Gallery and online organized by the Center for the Study of Political Graphics (CSPG) featuring five decades of posters protesting police violence.

“To Protect & Serve?” features graphics created during the last 50 years—from Los Angeles to New York, from Mexico to Bangladesh, and from Europe to Africa. The exhibition includes posters addressing policing as political repression, racial and gender profiling, the school to prison pipeline, immigration raids, militarization of law enforcement, and organizing resistance.

The murder of a succession of unarmed African Americans at the hands of police has catapulted the issue of racist police violence and state repression into the national and international spotlight. Too frequently, other targets include immigrants, the LGBTQ community, the poor, homeless, mentally ill, and political activists.

The current struggles against police violence and state repression by organizations such as Hands Up United and Black Lives Matter are part of a long history of resistance, which is often documented in graphics produced by the activists, artists, and organizers engaged in these efforts. Posters tell of domestic and international efforts to challenge police brutality, and are one of the most effective tools for revealing these often-hidden or forgotten stories.

CSPG is an activist, educational, and research archive with more than 90,000 social movement posters from the 19th century to the present, including the largest collection of post-World War II political posters in the United States.

The 18th Street Arts Center will be producing online exhibition walkthroughs and a panel discussion on Sept. 17 at 4 p.m. in collaboration with CSPG.

New John Adams’ release 'Must the Devil Have All the Good Tunes?’