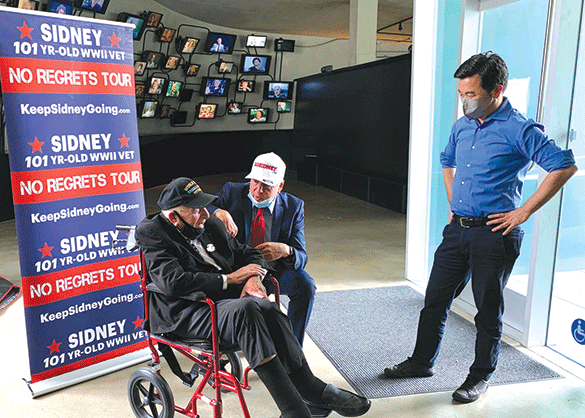 Los Angeles City Councilman David Ryu, 4th District, recently recognized World War II veteran Sidney Walton and his son, Paul Walton, at the Los Angeles Museum of the Holocaust. Sidney Walton, a 101-year-old Jewish veteran, is among the last remaining soldiers from World War II and is currently on his 50-state “No Regrets Tour.” He serves as an ambassador for veterans and is calling attention to their sacrifices. Walton was born in 1919 in New Jersey and joined the U.S. Army at age 21, nine months before the attack on Pearl Harbor. He fought in China, Burma and India with the 34th Infantry, 8th Division, and returned to the U.S. after the war. For information, visit gosidneygo.com.