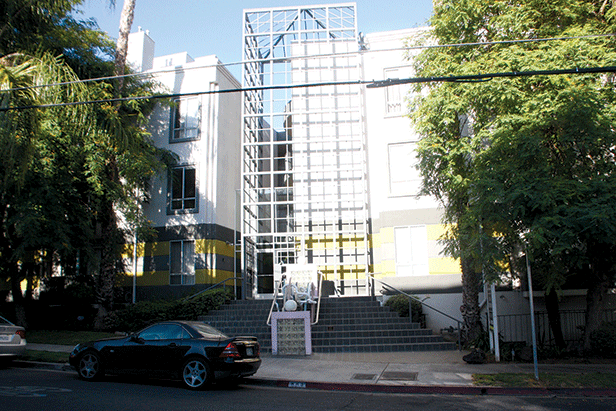 The West Hollywood City Council voted on July 20 to require all new apartment leases in the city be for at least one year. (photo by Jose Herrera)

On July 20, the West Hollywood City Council unanimously voted to prohibit initial leases of less than a year for many types of residences.

The council’s action resulted from a lawsuit against BPREP 8500 Sunset LLC, which owns AKA West Hollywood at 8500 Sunset Blvd. In 2017, it emerged in a Los Angeles Times article that while the east tower of AKA West Hollywood was being used as a traditional apartment building, the west tower was being used as an extended-stay hotel. The city pushed back against that use and the dispute went to court. In March, the city reached a tentative settlement with BPREP that required West Hollywood to update its zoning rules via this ordinance.

As part of the ordinance, AKA and other apartments, duplexes and accessory dwelling units – also known as granny flats or casitas – near Sunset Boulevard that have already been rented out using short-term leases will be allowed to continue to do so through the end of 2029. At that point, the rental units must be treated like other rental units in the city and be initially leased for a minimum of a year, which council members said will add to the number of housing units available for the city’s residents.

“This is not a perfect solution. Settlements of litigation rarely are. But I think the ordinance before us is actually a good start to protecting our dwelling units throughout the city,” Mayor Pro Tempore John Heilman said.

“We have always prioritized long-term housing, and especially in our community, we prioritize the creation of long-term affordable housing. That’s something that we need to make sure nobody else is coming in to take advantage of,” Mayor Lindsey Horvath added.

“There are a number of properties that are not directly on Sunset, as the Sunset Specific Plan reaches down some of the side streets off Sunset slightly,” Dimond said.

Though the vote passed unanimously, the ordinance received pushback during public comment. Some property owners and Genevieve Morrill, president and CEO of the West Hollywood Chamber of Commerce, called in to praise the flexibility offered by short-term leases for entertainment-industry workers who move to the area for work, as well as those who move into short-term units while moving or repairing their homes. Several hotel workers also called in during public comment to oppose the ordinance.

Danielle Wilson, research analyst for Unite Here Local 11, the union that represents hospitality workers including hotel employees, said short-term leases not only threaten the job security of hotel workers by hurting the hotel business, but they also drive up rents and real estate prices, further impacting the hotel employees.

“The decision before you tonight is about our city’s values and what you believe is worth fighting for. If that isn’t housing, I don’t know what is,” Wilson said.

At the request of Councilman John D’Amico, in its motion to approve the ordinance, the council also agreed to have city staff study the impact of short-term leases on hotel workers and bring that information back to the council in six months.

Though he voted to approve the ordinance, D’Amico said he wanted the ordinance to have a wider effect than just the Sunset Specific Plan, noting that in effect, the city’s rules were primarily aimed at the AKA West Hollywood project, despite city officials claiming they intended to make rules for the city as a whole. City staff recommended including all residential units in commercially zoned areas of the city, but the other City Council members chose to limit the ordinance to the Sunset Specific Plan.

“It just kind of feels like we’re being too cute by half, because I don’t really think there are any completed residences that rented themselves [like AKA West Hollywood did] in the Sunset Specific Plan, so what we’re doing is writing a zone text amendment for this property,” D’Amico said.

D’Amico added that two years of the lawsuit and the high cost of the city’s court and attorneys fees – estimates among council members ranged from $600,000 to approximately $1 million – were intended by the city “to prove we weren’t going to [make a zone text amendment just for AKA West Hollywood], and now we’re doing that.”

D’Amico asked City Attorney Michael Jenkins if any other properties would emerge as having conducted business the same way AKA West Hollywood did, and Jenkins said he couldn’t promise that wouldn’t be the case. If they did and could prove that they were offering leases of at least 31 days between Jan. 1, 2018, and March 15, 2020, the city would have to let them continue to do so until Dec. 31, 2029.

In the ordinance, the council also affirmed that single-family homes and condominiums can be rented for terms of 31 days or more, though that is likely to be reconsidered at a future meeting after Councilwoman Lauren Meister expressed concern with houses and units that are rented for parties. Meister proposed that longer leases might discourage the use of these residences as party houses.

“I agree with the concern about existing homes being used for partying, especially during this pandemic,” Heilman added.

Though city staff will return at a future meeting to address the leases for houses and condominiums, Councilman John Duran pushed back on the idea, saying that the city would be “overreaching and overstepping” by telling “people what they can do with their own homes and own condos.”

“There are ways to deal with party houses. There’s the noise ordinance, there’s sheriffs, there’s code enforcement. There are many different ways to deal with the issue of loud and noisy parties, but telling a homeowner that they cannot lease their home out for less than a year … I really can’t support [that],” Duran said.