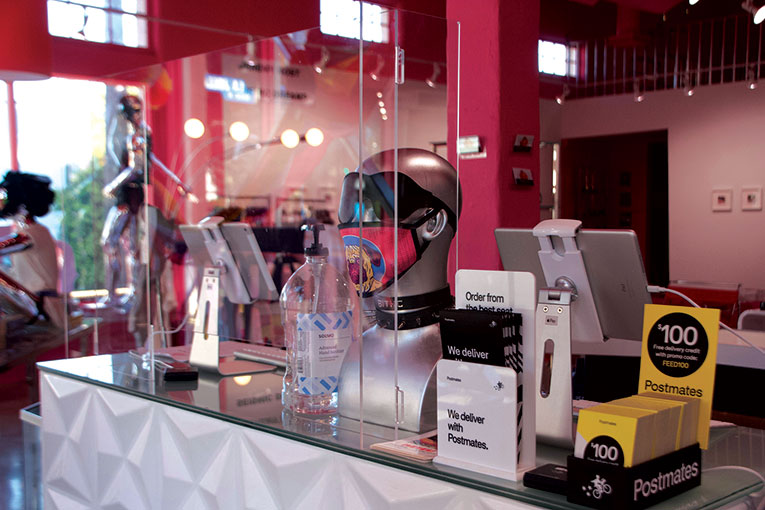 A measure to increase sales tax in West Hollywood was approved for the Nov. 3 ballot. The increase would be added to purchases at retailers throughout the city, including Circus of Books, above. (photo by Jose Herrera)

The maximum sales tax rate allowed in Los Angeles County is 10.25%. A majority of West Hollywood voters would need to approve the measure in November.

The city of West Hollywood is experiencing financial difficulties due to the economic impacts of COVID-19, Community and Legislative Affairs Manager John Leonard said.

“Staff is recommending a 0.75% sales tax increase to be placed on the November 2020 ballot,” Leonard said. “This would generate approximately $11 million in general funds for the city which could be used for general purposes including continuing levels of service.”

In a staff report, it was noted that the financial hardship the city is facing has led to a reduction in contracted services, the furloughing of city employees and hiring freezes for vacant city staff positions. The report also highlighted the need to secure new long-term debt in completing current capital projects and drawing upon city emergency reserves to make up for the revenue losses in fiscal years 2020-21.

“At the same time we continue to see an increased need in some of the important services we provide whether that be senior and social services, rental assistance, homeless resources, as well as economic development tools to help maintain our businesses,” Leonard said.

The city of West Hollywood receives approximately 1% of the current 9.5% sales tax, with the remaining 8.5% allocated to other taxing entities, including the state and county.

In recent years, the sales tax has increased in West Hollywood due to countywide sales tax increases approved under Measure M, which supports the expansion of Metro projects, and Measure H, which funds county homeless services.

If other measures are approved on a countywide basis, it would reduce the portion of the 10.25% maximum sales tax that would directly benefit the city of West Hollywood, according to the staff report.

“It’s a horrible time to be raising taxes for residents and our businesses, but we are also aware that if the city of West Hollywood does not capture this three-quarter percent it will be acquired by the county and most likely not used in our community,” Morrill said.

The city had also hired FM3 Research, a research and consulting firm, which conducted a survey between July 11-16. They reached out to potential voters via telephone and email to gauge support for the sales tax increase in November.

The survey showed 63% of West Hollywood voters support the sales tax increase, with 34% against it and 3% undecided.

Morrill said the survey wasn’t broad enough to gauge how West Hollywood voters would respond because the random sample doesn’t include enough stakeholder feedback. She suggested the city conduct more outreach and educate voters on the potential sales tax increase.

“If we don’t do this the county agencies are going to do it, and that money is going to go into a big county pool and we’ll never see any of it,” Heilman said.

City staff will come back at a future date with a draft of the proposed ballot measure, which will be considered by the City Council.