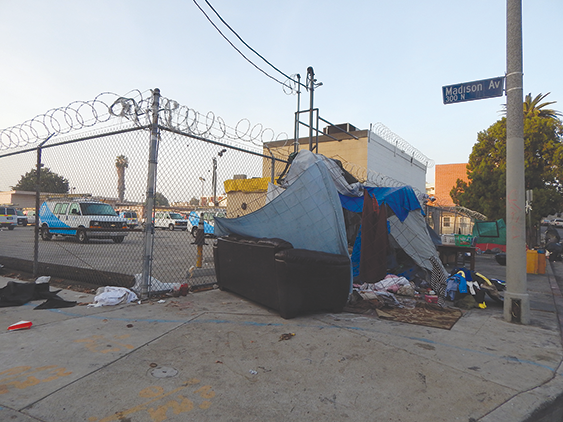 The West Hollywood City Council voted 4-1 on June 15 to approve additional direction for the city’s Homeless Initiative in an effort to find alternative solutions and services to help prevent and reduce the number of individuals living on the streets.

Corri Planck, manager of the West Hollywood’s Strategic Initiatives Division and acting director of the Human Services and Rent Stabilization Department, presented the city’s “Five-Year Plan to Address Homelessness In Our Community: 2020 Progress Update” to the City Council during a virtual meeting.

“We are mindful that issues of racial and social justice continue to impact this work,” Planck said. “We are painfully aware that systemic racism and discrimination have led to significant over-representation of Black, Latinx and LGBT, particularly trans people, experiencing homelessness both in L.A. County and in West Hollywood.”

The City Council agreed that members of the Strategic Initiatives Division should research and invest in more community-based services that would provide the city with tools to better address homelessness and cases of individuals who may have substance abuse and mental-health issues. Councilman John D’ Amico, however, voted against the council’s direction to continue some of the services in the Homeless Initiative. He said he doesn’t fully support the Homeless Initiative that uses taxpayer money for services that aren’t doing enough to address homelessness.

The update comes on heels of the 2020 Greater Los Angeles Homeless Count results, which showed there are 66,436 people in the county experiencing homelessness, a 12.7% increase from last year.

The Los Angeles Homeless Services Authority, which conducts the count, has reported an increase of homeless individuals in West Hollywood since 2016. The organization counted 131 homeless individuals in 2019 as part of the yearly count. But Planck said the city of West Hollywood should see a decrease in homelessness when LAHSA releases city and community data from this year’s count, later in July.

The city’s five-year plan, implemented in 2018 and part of the Homeless Initiative, identifies key actions to reach goals developed in partnership with the West Hollywood community, stakeholders, business owners and agencies contracting with the city.

She added the city’s collaboration with Cedars-Sinai Medical Center has produced positive outcomes for individuals. The medical center is a funding partner and assists through the emergency department’s new homeless navigators, who coordinate with the city to connect homeless individuals to community-based services.

Planck said West Hollywood residents may call (323)848-6590 to leave an anonymous message about homeless individuals who may need assistance.

Mayor Pro Tempore John Heilman said he was frustrated about the city’s limitations in its ability to help individuals who are suffering from severe mental illness.

“One of the areas I really want to see us emphasize in the upcoming year is to work with the state legislature to develop opportunities for us to more readily have conservators placed for these individuals, so that they are getting the kind of care they need,” Heilman said.

“The challenge of nighttime outreach teams is that there’s no nighttime availability of shelter beds, and that is a continuing challenge, and we’ll continue to have dialogue on that as well,” Planck said in response.

Katie Egan, a Strategic Initiatives intern, presented information to the council of how many individuals the Homeless Initiative has helped between 2016 and 2020. City agency partners placed 110 homeless individuals into permanent housing, assisted an additional 110 homeless youth in accessing the L.A. LGBT Center’s interim housing program and provided 536 West Hollywood residents with rental assistance to prevent homelessness.

She noted the number of residents seeking rental assistance has doubled since March as result of the coronavirus, which has exacerbated homelessness.

“Homeless Services Staff work hard to meet folks where they’re at and not call attention to themselves or their work, but on a daily basis agency staff are meeting one-on-one with people who are experiencing homelessness to provide them with support and case management,” Egan said.

D’Amico voiced concerns to Planck about how much money the city could potentially spend in the next 12 months providing rental assistance, as well as what the Homeless Initiative could accomplish in the next two years in respect to ending homeless in West Hollywood.

Planck  said the city overall has allocated approximately $400,000 in rental assistance. She estimated the city will have to allocate approximately $2 million in the months ahead, if the coronavirus health crisis continues to strain the economy.

“Our hope is to get to a place where we don’t have as many people falling into homelessness with the same rate and speed as they have been over the last couple of years,” Planck said.

She said her hope is that experiences of homelessness in West Hollywood would be brief and non-recurring.

Councilman John Duran commended the Strategic Initiative Division’s work and said the staff has done a good job with the tools available.

“It’s a problem that’s larger than any  one city can handle and I know that’s why we’re doing a regional approach,” Duran said. “It’s going to be an effort for the decade, if not longer.”

Mayor Lindsey Horvath advocated for the inclusion of more accessible programs and services in the Homeless Initiative, and said she would like to see more accountability when city staff are helping them through the system, as well as more of a 24-hour approach.

“There are programs out there that are 24-hour that when somebody needs help or decides they’re willing to accept it, no matter what the hour, they’re able to get in,” Horvath said. “That’s a critical component to being able to get help and place people into shelter and care.”

Ryu presses ahead with plan to root out corruption