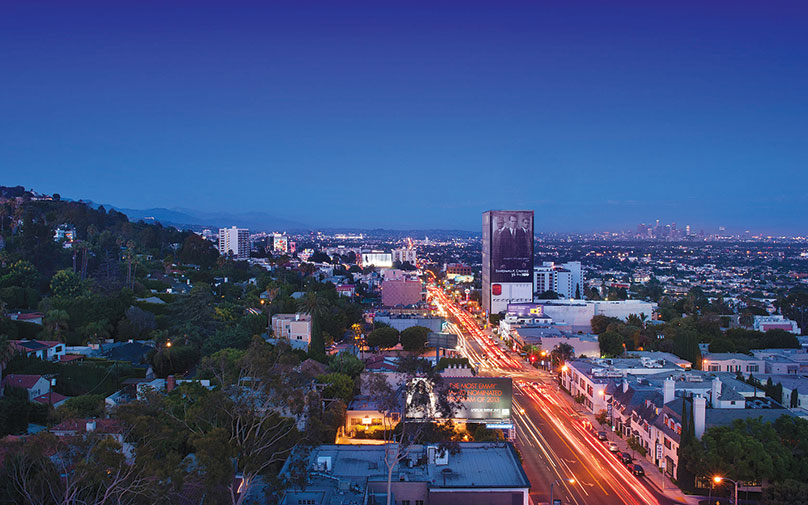 West Hollywood has announced the first set of 21 projects on the Sunset Strip. (photo courtesy of the city of West Hollywood)

The city of West Hollywood has completed its application screening process for the Sunset Arts & Advertising Program and the city announced its first set of 21 signage projects awarded in concept as part of the merit-based program.

These projects will contribute to a dynamic environment on the Sunset Strip in West Hollywood — one that preserves the past, celebrates the culture of the strip, supports artistic expression, rehabilitates existing buildings, generates new pedestrian-oriented development and creates signage that is creative and integrated into architecture, with advertising content as its own form of art.

“The Sunset Strip is one of them of the most visible signs for outdoor advertising in the world,” Mayor Lindsey Horvath said. “Dynamic and creative outdoor advertising signs have long characterized the Strip and have been an integral part of culture on this famous boulevard —including the iconic Marlboro Man and legacy rock ‘n’ roll billboards.”

Horvath added these new projects are intended to update the concept of what a billboard can be and increase the visibility of West Hollywood’s Sunset Strip.

A significant aspect of the updated Sunset Arts & Advertising Program is the expected public benefits that any approved advertising project would bring to the Sunset Strip and the city of West Hollywood. If approved, the top-scoring project would bring historic preservation, building improvements, public space improvements, arts and civics programming and revenue sharing to the city.

Each project is a partnership with the city of West Hollywood and will include a share revenue dedicated to the city. Additional funding is required for arts curation and improvements to the public realm.

A digital sign can bring in at least six times the revenue of a typical static sign. If approved, these projects will bring in a steady stream of annual revenue to the city in order to provide vital services and infrastructure to the West Hollywood community.

A downloadable “Top-Scoring Project Report” has been available on the city of West Hollywood’s website at weho.org/sunsetdigital.