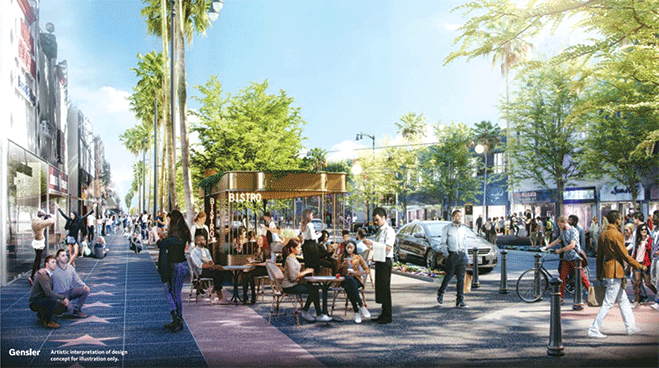 On July 29, Los Angeles City Councilman Mitch O’Farrell, 13th District, announced that the Hollywood Walk of Fame Master Plan, the signature project of his “HEART of Hollywood” initiative, has officially begun schematic design, the next stage toward developing a full master plan. The project began early last year and released a concept plan this past January.

“This began as an effort to bring a cohesive, holistic design – centered around residents and pedestrians – to the Hollywood Walk of Fame,” O’Farrell said. “In the wake of COVID-19, the goals of this project are even more important. Enhancing public spaces is not only good for our collective psyche, but also for a local economy that is being challenged by the pandemic.”

The concept plan envisions Hollywood Boulevard along the Walk of Fame as a place with wider sidewalks, more space for amenities like sidewalk dining, additional shade trees, enhanced lighting, a mobility lane and additional pedestrian safety features. It is anticipated that the project could create hundreds of construction jobs, along with other economic, environmental and public health benefits.

Since the beginning of COVID-19, Hollywood Boulevard along the Walk of Fame has seen a 14% rise in vacancies, and this project intends to help revitalize the boulevard when the community begins to emerge from the pandemic.

Robust community engagement has been a cornerstone of the effort. In-person and virtual outreach has included focus groups, neighborhood council meetings, a community open house, surveys and an ongoing series of roundtable meetings, more than 40 of which have been held thus far.

“Like so many in Hollywood, I’m so excited about this project and have enjoyed being a part of the community engagement process,” said Sarah Zurell, a Hollywood resident and entrepreneur. “The ongoing outreach by Councilmember O’Farrell’s team has been inclusive, inspiring, and an example of how to build consensus around a vision. This process has reflected the love and care that so many people have for this treasured public space.”

The project is being overseen by the City of Los Angeles Bureau of Engineering. The concept plan proposes roadway changes to Hollywood Boulevard, including removing the parking lane between Gower Street and La Brea Avenue and reducing the street by one travel lane in each direction between Argyle Avenue and La Brea Avenue. That space would then be dedicated to the new amenities, which would be designed and constructed in collaboration with the community.