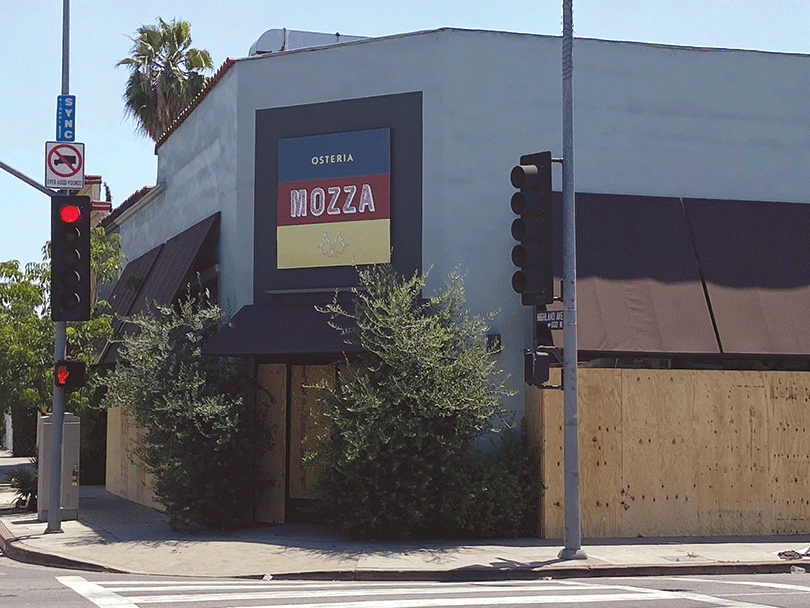 The suspects allegedly broke into Mozza, shown here during the first week of June when windows were boarded, and started a fire and stole items including bottles of liquor. (photo by Edwin Folven)

The Los Angeles Police Department announced the first arrests on July 16 made by the SAFE LA Taskforce, a multi-agency effort to identify and prosecute individuals who allegedly committed serious crimes such as looting, arson, robbery, burglary and assault during protests in late May.

Investigators with the taskforce arrested Mario Alvarado, 43, and Julian Mejia, 34, for alleged arson and looting that occurred on May 30 at the Mozza restaurant complex, located at Melrose and Highland avenues. The suspects allegedly broke into the restaurant, started a fire and stole numerous items including bottles of liquor. The MelroseMAC store and others near Mozza were also looted, and the two suspects were likely among a group responsible for those crimes, said Lt. Ben Fernandes, with the LAPD’s Robbery-Homicide Division. The two men have only been charged for the alleged crimes at Mozza.

Fernandes said he did not know why one suspect was being charged by federal authorities and the other by county officials, other than it was an arrangement made by the two prosecuting agencies. Federal charges often carry more lengthy prison sentences.

Fernandez said the suspects did not live in the immediate area where the crimes occurred and did not provide the locations where the search warrants were served. He surmised that the suspects committed the crimes during a period when large demonstrations occurring in the Fairfax District and surrounding areas tied up police resources. Numerous other stores farther west on Melrose Avenue and others on Fairfax Avenue were burglarized or looted on May 30, and police are still investigating those incidents.

Fernandes said the arrests of Alvarado and Mejia demonstrate the task force’s website is working. Photographs and videos of other suspects wanted for serious crimes allegedly committed during the protests can be viewed by visiting lapdonline.org/safelatips. They include arson and looting at The Grove and the intersection of Fairfax Avenue and Beverly Boulevard, where LAPD patrol cars were set ablaze.

“It’s absolutely working, because it’s holding people accountable for what they did,” Fernandes added. “We have been getting a lot of tips and they are still coming in.”

Anyone with information about the crimes is urged to call (213)486-6840. Callers can remain anonymous. Tips, photographs and videos may also be submitted online by emailing safelatips@lapd.online, and by visiting fbi.gov/laviolence and lapdonline.org/safelatips.

The Beverly Hills Police Department has also created a website for people to provide tips and information about crimes that occurred during the protests.

To submit information to the BHPD, visit beverlyhills.org/departments/policedepartment/contactus/evidencesubmissionportal/web.jsp.