Shelter offers hope for those on the streets 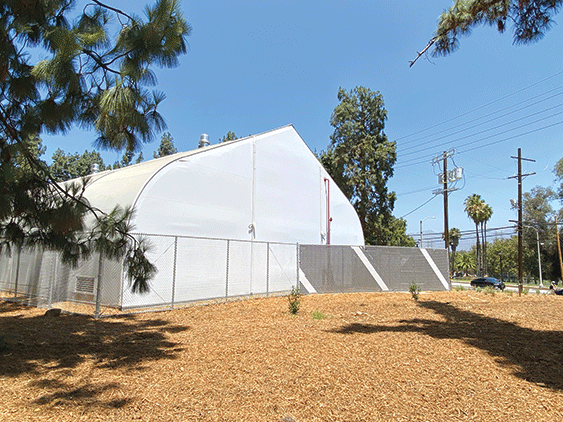 One hundred men and women experiencing homelessness will soon be living indoors in a new bridge housing shelter at 3210 and 3248 Riverside Drive, on a former parking lot just south of Los Feliz Boulevard near the entrance to Griffith Park.

The facility officially opens tomorrow, July 24, and the new residents are expected to move in next Tuesday. It will be the third temporary shelter to open in Los Angeles City Councilman David Ryu’s 4th District as part of the “A Bridge Home” program. A formal opening will not be held because of COVID-19, but plans call for a video presentation on the shelter to be posted on Mayor Eric Garcetti’s and Ryu’s Facebook pages on Friday.

The building incorporates an outer membrane over a rigid frame and was built in five months. Funded with $7 million in state grants, the approximately 10,800-square-foot shelter will serve people experiencing homelessness who were identified by service providers in the surrounding community.

“The Los Feliz Bridge Home will mean shelter, safety and health care for hundreds of people currently living on the streets or in the L.A. River,” Ryu said. “This center, and the many more we’re building across District 4, will save lives.”

The shelter will have kitchen, shower and laundry facilities, storage and special amenities including an area for pets. Many people experiencing homelessness are reluctant to move into shelters if they are unable to take their pets, Ryu’s spokesman Mark Pampanin said. Aether Apparel and Allied Feather & Down donated bedding and pillows. Staff from People Assisting the Homeless will be onsite providing services such as counseling, assistance with medical care, help finding employment and obtaining permanent housing. Residents will generally live in the shelter for six months to a year and a half. The goal is to help as many people as possible during the three years the temporary shelter is in place, Pampanin said.

“As we do with all of our interim housing programs, PATH will be providing wraparound services which include intensive case management, linkages to medical and mental health support and groups and classes for self-awareness and improvement,” said Jennifer Hark Dietz, deputy CEO and executive director for PATH. “In addition, we focus on housing navigation and employment assistance such as resume building and interview preparation. These services are designed to help people move into – and stay – in permanent housing. Our goal is to help every individual identify a home, connect them with the resources they need to get back on their feet and help them transform their lives.”

PATH has a plan in place to prevent the spread of COVID-19 among residents of the shelter. Residents will be provided and required to wear masks and other personal protective equipment, and social distancing will be required in the dining, laundry and hygiene areas. Staff will routinely disinfect areas shared by people in the facility.

If any resident shows symptoms of COVID-19 or tests positive, PATH has a hotline linking staff directly to the Los Angeles County Department of Public Health, which has arrangements for individuals to immediately be taken to an isolated facility. Similar plans are in place at all shelters with services provided by PATH.

Temporary shelters are being used throughout the city to house homeless individuals while more permanent housing is built. Garcetti launched the “A Bridge Home” program in 2018, offering more funding and resources to address homelessness to council members who identified locations to build temporary shelters. The new shelter on Riverside Drive utilizes a similar membrane construction as one that opened last year in the 13th District on Schrader Boulevard in Hollywood.

The shelter on Riverside Drive is the fourth housing facility for homeless individuals to open over the past two years in the 4th District. The Los Angeles LGBT Center’s Emergency Youth Shelter provides 100 beds, Wallis House at Aviva in Hollywood offers 42 beds for women and the Gardner Street Women’s Bridge Housing shelter provides 30 beds. Six other shelters with 320 beds are either under construction or in development in the 4th District.

The shelter on Riverside Drive was not built without controversy, as a lawsuit was filed in January by a group called Friends of Waverly claiming the project was illegally approved. The Los Angeles City Attorney’s Office announced on July 14 that the city has prevailed against all the causes of action filed so far challenging the shelter.

“My office will continue to fight to defend the homeless housing we so urgently need,” Los Angeles City Attorney Mike Feuer said. “These victories are important milestones in this vital work.”

Ryu added that he will continue to focus on providing more services and housing for people experiencing homelessness and believes a comprehensive approach is needed to help people move off the streets.

“It’s not just about the housing, but the care and services that our unhoused neighbors so desperately need and the close collaboration with the community that will make more homeless housing centers possible,” Ryu added.

(This article was updated at 12:15 p.m. on July 23 to include information about a plan to prevent the spread of COVID-19 at the shelter.)

It took five months and $7 million to build a giant tent???