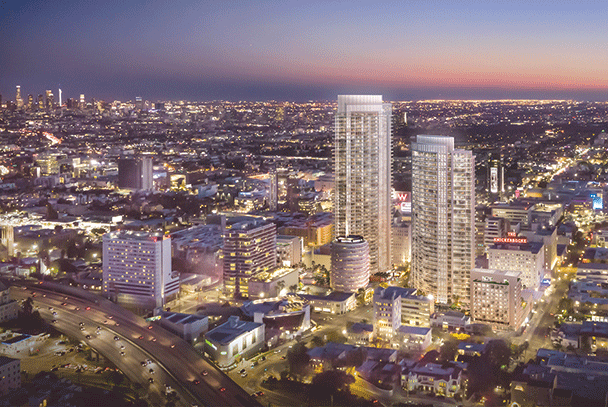 The Hollywood Center project wants to build towers on both sides of Vine Street near the Capitol Records building. (rendering courtesy of Handel Architects)

Opponents of the Hollywood Center project, a mixed-use development planned on the area around the Capitol Records Building in Hollywood, are citing new state reports on potential earthquake faults running underneath the property as more reasons the project should not be built.

The Hollywood Center project is a 4.5-acre, mixed-use community planned just north of Hollywood Boulevard, on both sides of Vine Street. The area is currently parking lots surrounding and across the street from the Capitol Records Building, which will be preserved. The project was proposed by MP Los Angeles, by the same developer who previously proposed the Millennium Hollywood project at the site.

Plans call for two buildings – one 35 stories and the other 46 stories – along with two 11-story mid-rise buildings. The project will include 1,005 residential units, of which 872 will be market-rate units and 133 will be for very-low and extremely-low income seniors.

According to a project description on the Los Angeles City Planning Department’s website, an option exists for the developer to alter plans for the site and include a 220-room hotel, which would result in a lower number of market-rate apartments – 768 units. That option also includes an additional 116 affordable units for seniors.

The Hollywood Center project is currently being analyzed by the planning department, which is preparing the final environmental impact report with plans to release it later next month. After the EIR is released, the public will have additional opportunities to provide input before the project goes to the Los Angeles City Council for consideration.

The City Council approved the former Millennium Hollywood project in 2013, but a judge later blocked the development in 2015 after community groups filed a lawsuit and a judge ruled the project’s impacts on the surrounding area were not adequately addressed. The judge ruled that impacts traffic caused by the project would have an adverse effect on the surrounding community. The developer went back to the drawing board and created the Hollywood Center project.

The California Geological Survey and U.S. Geological Survey, government agencies that analyze geological conditions, released new reports in July and April, respectively, indicating there are faults likely running through the property. The CGS had previously conducted a study in 2014 indicating faults were present but their exact locations were not determined. The recent studies used more advanced technology and came to the same conclusion that three faults likely exist under the property. The CGS survey further indicated that three smaller faults that are offshoots of the main faults exist just east of the site along Argyle Avenue.

The USGS and CGS does not make decisions regarding building projects, and instead provides information to help city planners and government leaders make informed decisions about potential dangers that exist at different sites. MP Hollywood has conducted independent seismic studies that indicated there is no danger from active faults at the site.

Attorney Robert P. Silverstein, who represented many community groups that came together under stopthemillenniumhollywood.com, filed the previous lawsuit that blocked the Millennium Hollywood project. He is leading opposition to the Hollywood Center project and said the new seismic studies are proof that the proposed project would be dangerous.

“Now, we have two independent agencies, the California Geological Survey with its report [in July] and the U.S. Geological Survey with its report two months ago, that say the seismic studies prepared for the Millennium developer and sold to the public and city officials as gospel, paint a completely false picture of the dangers of building two high-rises on this property,” Silverstein said in a statement. “These independent government studies are bombshells that totally destroy the developer’s new project and the narrative that there’s only one, inactive fault on its property.”

MP Hollywood’s independent seismic studies by private geologists determined that a fault in the area was inactive and posed no threat. Philip Aarons, founder of MP Los Angeles, disputed the findings of the two new studies.

“The state of California has developed highly stringent protocols for investigating earthquake faults through the Alquist-Priolo Act. It is the state’s responsibility to identify and map potential fault zones, and local government’s duty to closely examine each development proposal in those zones for active faults to determine whether a site is safe to build on,” Aarons said in a statement. “In regard to Hollywood Center, that protocol has been strictly adhered to time and again, notwithstanding what appears to be a continued attempt by the California Geological Survey to undermine this well-established legal process. A new geology and soils study was prepared for the draft environmental impact report, published earlier this year. That study, which was approved by the city’s Department of Building and Safety, concluded that there is no active faulting beneath the project site and therefore the site is safe to build on according to state and city requirements.”

“We have asked our geological consultants to review the CGS letter,” Aarons said. “The Hollywood Center project site has been the subject of the most extensive geotechnical testing of any property in Hollywood. From 2012 to 2019, seven fault investigations were performed. In each and every case, those studies have come to the conclusion that there is no active fault on the project site. We will continue to work diligently with the city to review any and all data with the goal of assuring the construction of the most seismically safe structure in the history of Los Angeles.”

Los Angeles City Councilman Mitch O’Farrell, 13th District, has not made a decision on the development.

“The California Geological Survey [information] is concerning,” O’Farrell said. “The issues raised in the letter will need to be directly addressed before any project can be safely built at this site.”

Information about the Hollywood Center Project project is available for public review by visiting planning.lacity.org/development-services/eir/hollywood-center-project-1.