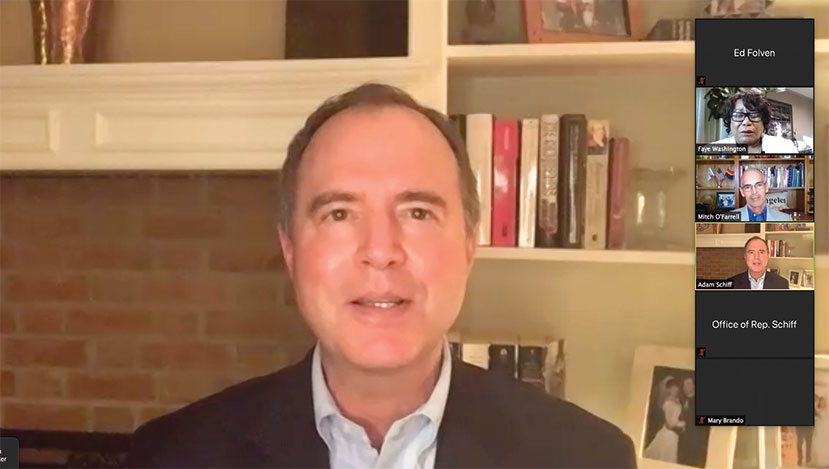 U.S. Rep. Adam Schiff outlined his approach to COVID-19 relief and other issues affecting the country during the town hall meeting.

The lawmakers discussed a variety of topics including the government’s response to the COVID-19 pandemic; help for businesses, property owners and renters; and the need for people to wear masks in public. They also addressed the recent protests and civil unrest that occurred in the wake of the deaths of George Floyd and others at the hands of police. The town hall was moderated by Faye Washington, president and CEO of the YWCA Greater Los Angeles.

Both Schiff and O’Farrell said although times have been tough during the pandemic, leaders at all levels of government have been stepping up to provide relief for people who are struggling. Schiff was critical of the Trump administration’s response to the coronavirus.

“The starting point really has to be, for me anyway, [that] it didn’t have to be this way. We did not have to be the world’s leader in the number of infected persons and the number of fatalities. After all, it’s not that the United States lacks the resources that other countries do, it’s not that we lack the expertise or the capability or the scientific knowledge. Indeed, I think we can proudly say, in many, if not most of those areas, we exceed the capability of any other nation on Earth. But yet, we’ve had the worst results in terms of catastrophic losses,” Schiff said. “To be blunt, what we’ve lacked is leadership at the very highest level to coordinate the response to the pandemic, to bring the states and the cities and the counties together in this fight, to make sure we weren’t competing with one another over protective gear or ventilators, to make sure there are consistent messages going out to the public about masks and safety protocols. We have had this blur of information, misinformation and counterinformation, and it’s been catastrophic.”

O’Farrell said the need for change at the federal level is greater than ever, and the pandemic has strengthened his resolve to continue doing everything he can to provide relief for constituents. O’Farrell said the recent protests in the fight for racial equality and justice also illustrate an important moment in time that can be used as a catalyst for transforming society.

“I think COVID-19 has laid bare for the world to see all the inequities in U.S. society, those who are most affected when the economy suffers,” O’Farrell said. “We know the higher instances of mortality for those who are infected with COVID-19 are Black and brown Americans. Then, with the killings of unarmed Black men and women, that has also highlighted and galvanized this once in a lifetime opportunity that we must not squander. [We need to] take advantage of it, transcend through it. Now is the time, it’s a moment we are all part of and we can rise to the occasion, and we can emerge better and stronger than ever before. We have the ingredients to transcend this incredibly challenging time and emerge better and stronger and more unified as a country.”

Schiff and O’Farrell said they support the peaceful demonstrations that occurred after Floyd’s death. The congressman said he was proud to march with demonstrators in Hollywood, and O’Farrell highlighted the All Black Lives Matter demonstration on June 14, in which tens of thousands of people marched peacefully from Hollywood to West Hollywood. He described it as a pivotal moment in history and is working to create a permanent marker commemorating the June 14 demonstration. He also noted that the city has long been a leader in promoting equality. O’Farrell cited the example of his effort to replace observances of Columbus Day with Indigenous People Day in Los Angeles.

“People are coming together as never before to make sure that the most historically marginalized communities among us are not forgotten,” O’Farrell added. “It’s a very important time, and we have a lot to reflect on and a lot of work to do that I feel will yield very positive results.”

Schiff said the criminal justice system is one of many segments of society that need reform, and added that a lack of access to health care is equally determinantal for communities of color. He said those inequities have become more apparent during the COVID-19 pandemic. Schiff is working on a bill that would make health care for all citizens a civil right, similar to the way equitable access to housing is considered a right, he said. 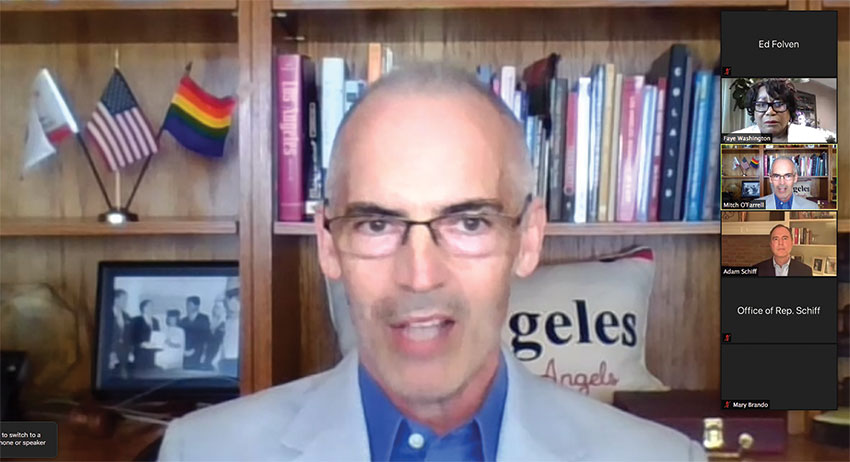 “When we look, for example, at how the COVID-19 pandemic is affecting people of color, what you see is that in many parts of the country, where the Black community may represent 10% of the population, they may be 20%, 30% or 40% of the known infections and casualties from the pandemic. [There are] similar numbers for the Latino community,” Schiff said. “With respect to the economy, you find many in the Latino community are the first to be laid off and the last to be re-hired. In the small business program, with those having difficulty accessing capital before the pandemic, the pandemic threatens to make that divide even worse. So, we need to be addressing each of the inequities. We need to be thinking about, ‘How do we build the country back better than before as we come out of the pandemic?’”

Schiff and O’Farrell also discussed relief efforts currently underway in Los Angeles. O’Farrell cited a $100 million program providing relief to renters in Los Angeles using money from the city’s allocation of CARES Act funding. He also highlighted a program that used $1 million in discretionary funds from the 13th District for small business loans. The lawmakers praised the federal Payroll Protection Program for keeping businesses afloat during the pandemic, and called for more similar funding to keep people employed in the future.

“I am all for an extension of the PPP program, and I’ll be following that very closely,” O’Farrell said. “We do our best with working with constituents and small businesses to make sure that we can connect them with the proper entities and to keep the funds going for them.”

Schiff said there is still PPP funding available through the CARES Act and he suggested that small business owners who were unable to obtain loans consider using community-based banks. He said larger banks have given preference to customers with larger accounts, and small businesses many fare better with smaller lenders. Schiff said moving forward, the federal government needs to do something much more dramatic than the PPP program.

“The federal government should guarantee payroll and paychecks right now for Americans,” Schiff said. “You know, 80% of payroll or 90% of payroll, whether your business is large, medium or small, it shouldn’t be run through banks that can pick their favorite customers. This kind of one-size-fits-all approach is not only more efficient, it’s much more equitable.”

Schiff also supports the $3 trillion Health and Economic Recovery Omnibus Emergency Solutions Act, known as the HEROES Act, which was passed by the House but is currently under consideration in the U.S. Senate. The HEROES Act will provide the next round of economic relief across all segments of society, which is particularly important given the reality that the COVID-19 pandemic is worsening, Schiff added. The HEROES Act will extend unemployment compensation, provide relief for states and cities and provide more money for testing and contact tracing, rental assistance and homeless services, Schiff added.

Both Schiff and O’Farrell also reiterated the need to wear masks in public to help limit the spread of COVID-19.

“There has been such widespread dismissal of science in the way COVID is transferred,” O’Farrell said. “It is estimated that if 95% of Americans will just wear a mask, it will save 30,000 lives by fall. I don’t know how much more information people need to have to take some responsibility. If this doesn’t improve, we are going to have to start taking a look, and some cities are already doing this, at actually stopping people and giving them citations.”

Schiff said he is working on a bill to provide free masks upon request through the U.S Postal Service, and to fund an educational campaign about the importance of wearing masks in preventing the spread of COVID-19.

“Something very simple like [wearing masks] can save tens of thousands of lives and save billions of dollars in terms of economic activity,” Schiff said. “It should be a no-brainer. But of course, sadly, and this is an area again where there is a real leadership deficit again in the Oval Office.”

Lastly, the lawmakers expressed concerns about fairness in voting as the Nov. 3 election approaches. Schiff said he supports vote-by-mail programs, including the system in place in California.

“My paramount concern is Americans stopping Americans from voting, and particularly, the effort that the president is making to discourage people from safely voting by mail,” Schiff said. “In any election, millions of American vote by mail, including the president and the vice president and many in the administration. Millions more are going to have to vote by mail in the fall because the pandemic is still going to be with us. The only question really is not whether the pandemic is with us in the fall, but whether we are still in the first wave or the second wave.”