Ryu presses ahead with plan to root out corruption 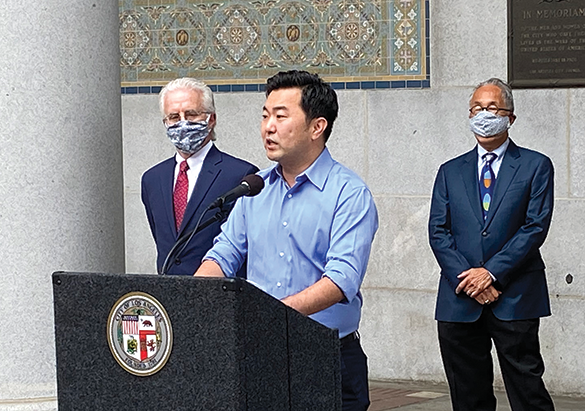 Los Angeles City Councilman David Ryu called for an inspector general during a press conference at City Hall, where he was joined by Councilman Paul Krekorian, left, and former Councilman Mike Woo. (photo by Edwin Folven)

On June 30, the council’s Rules, Elections and Intergovernmental Relations Committee approved a motion by Ryu to create a city Office of Anti-Corruption and Transparency that will focus on planning and land-use decisions. Huizar, who represents the 14th District, is accused of using his position as the former chair of the city’s Planning and Land Use Management Committee to facilitate the approval of projects by developers who allegedly paid hundreds of thousands of dollars in cash bribes and financed luxury trips for the councilman and co-conspirators.

“Last week, Jose Huizar was arrested on allegations of running a massive pay-to-play scheme with real estate developers. We have now learned that Huizar ran our city’s Planning and Land Use Committee like a crime syndicate. He accepted bribes from developers, he sold votes to the highest bidder and he abused the trust vested in him by the people of Los Angeles to enrich himself,” Ryu said. “Mr. Huizar’s corruption is disgusting. It is shameful. But unfortunately, it is nothing new.”

Ryu has fought to reduce the influence of developer contributions on city elections and proposed creating an inspector general to specifically focus on improprieties with land-use decisions. Details are still being worked out on how the inspector general and the proposed Office of Anti-Corruption and Transparency will operate within city government. Ryu said it could exist independently or within the Los Angeles City Controller’s Office or Ethics Department. The motion cites similar offices in other major cities including Chicago, which has an Inspector General’s Office with 100 staff members.

“This is the next step in bringing real reform to City Hall,” Ryu said. “I came to City Hall to root out corruption, and there is a lot of work left to be done. This inspector general would have the power to investigate corruption in land-use development and hold city officials accountable. I’m grateful to the council president and the Rules Committee for moving this legislation forward, and I urge all my colleagues to support this reform effort.”

Ryu first authored the motion in May. He also cited charges against former Councilman Mitch Englander, 12th District, in a case alleging he lied to federal investigators about his acceptance of money and gifts from a private businessman, as well as the five-year-long federal probe focusing on Huizar. The FBI served search warrants at Huizar’s home and City Hall offices in 2016, but he was not charged until June 23. Huizar’s involvement was intimated in other cases involving alleged co-conspirators in the corruption scheme.

Ryu said he believes the council should consider amending the city charter to decrease the amount of influence council members and PLUM committee members have on projects in their districts. He also said the council should be expanded from 15 to 25 members to reduce the size of districts and make council members more directly accountable and responsive to constituents. Ryu also called for more public financing of election campaigns so candidates are not beholden to special interests.

The group was joined by former Los Angeles City Councilman Mike Woo, who represented the 13th District from 1985-93 and said corruption in land-use decisions has been a longstanding problem. Woo supports Ryu’s measures to root out corruption. Krekorian also said he supports reform and added that it is upsetting that the actions of a few have tainted city government.

“Mr. Ryu used the word disgusting, and of course, it is. And one of the reasons it is so disgusting is the vast majority of honest public servants who work hard for the people of Los Angeles every single day are painted with this brush of corruption because of the acts of a few criminals. I want to draw a distinction here because I’ve been proud to work with Councilmember Ryu on many of the measures we described,” Krekorian said. “I stand in strong support of Councilmember Ryu’s measure to create an inspector general that will oversee the real estate entitlement process, root out crime, identify where there are violations of law and bring them to light.”

After being approved in committee on June 30, Ryu’s motion to create an Office of Anti-Corruption and Transparency will next be considered by the full City Council, likely in August.

“Corruption is only solved with real reform and systemic change,” Ryu said. “I challenge all of my colleagues to join this fight and bring their ideas to the table and to work to reform City Hall from the bottom up.”

Citations issued in WeHo for not wearing a face mask

David Ryu accepted plenty of cash from developers during his campaign to become elected.
He sure is getting all of these motions in as quick as he can before his re-election campaign.

What isn’t mentioned is how many development projects he himself voted “yes” to in his own district going against the community and the citizens who put him into office.

Like his colleagues, Ryu has cast his automatic “yes” vote for all of the corrupt projects that went before him.