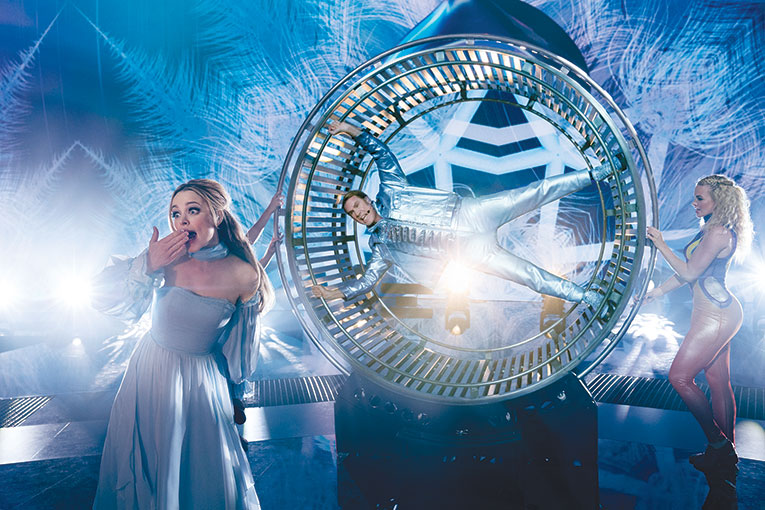 Rachel McAdams and Will Ferrell are the musical duo Fire Saga in “Eurovision Song Contest,” a fun parody of the famous international singing competition. (photo courtesy of Netflix)

Hard truth: Will Ferrell is wonderful, but most of his films are anything but. Why remains a mystery on par with the appeal of Joe Rogan. The push-and-pull of mediocre Ferrell attempts to rear its curly-haired head in “Eurovision Song Contest: The Story of Fire Saga,” but preposterous parody pairs well with priceless performances to propel perishable plots.

The Eurovision Song Contest – an actual televised competition debuting in 1956 – features the continent’s most promising music talent. It’s like “American Idol” with class and charm, and Lars (Ferrell) yearns for his Icelandic duo Fire Saga to grace that stage. That’ll show all his naysayers, especially a judgmental father (Pierce Brosnan). Flashy sartorial displays and Europop conflict with his hometown’s fishing vocation.

Meanwhile, the other half of Fire Saga, Sigrit (Rachel McAdams), yearns for Lars, but the amateur hopeful is too focused on his music. They have one chance to represent their town and country, so they embark upon stardom with separate, but perhaps converging, missions. If only a slew of obstacles didn’t await.

At the top of the frenemy list is Russian competitor Alexander (Dan Stevens), a frontrunner whose hit “Lion of Love” invokes the stylings of the Gypsy punk band Gogol Bordello, adding a sprinkle of show-tune style. The “Downton Abbey” veteran is something to behold here, from his bombastic demeanor to unviable wardrobe. He’s easily the show stopper for both Eurovision viewers and any Netflix streamers who venture though this kooky flick. 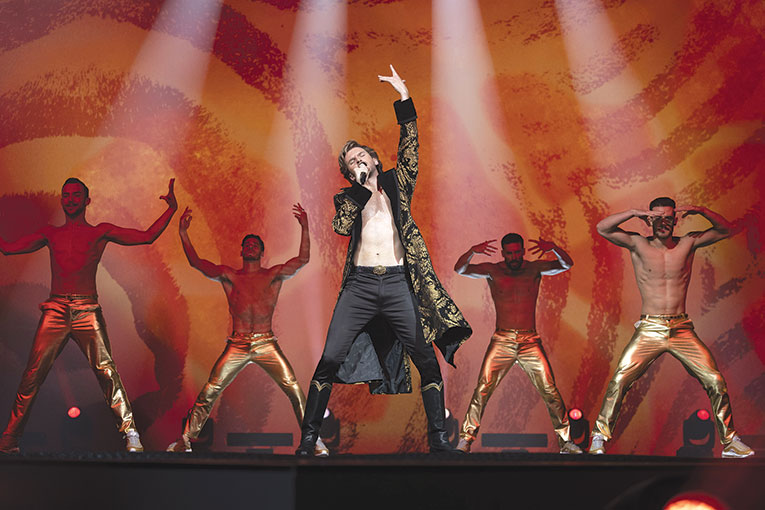 A few other nemeses share the screen too. An unknown saboteur has it out for Iceland. Government officials cringe at every one of Fire Saga’s missteps, all Lars’ fault, of course. And never underestimate elves. The rational world might’ve forgotten the old ways, but Sigrit knows the true power of her homeland’s lore.

Residing somewhere between “Anchorman” and “Zoolander,” “Eurovision” plants its flag in the over saturation, though it amounts to a lesser victory. Instead of stomach-clenching laughter, it relies more on smiles and immersion in the eccentricities of the characters. This is a family film for a younger demo, less likely to convert Ferrell’s detractors.

Perhaps the most shocking bit is the original songs created for the film, the result of enlisting writer-producer Savan Kotecha, who contributes to Ariana Grande, Ellie Goulding and Britney Spears, among other big names. Particularly, power ballad “Husavik,” or “My Home Town,” serves as proof that the music is no laughing matter. Created with Rickard Göransson and Fatmax Gsus, this enchanting number best be considered for an Oscar. It’s memorable beyond the film’s two-hour runtime.

While McAdams doesn’t actually sing the majority of her on-screen song, she’s still a gem here. Why isn’t she in enough films? She proves the perfect pairing with a ridiculous Ferrell. Don’t mistake that for declaring her the prudish voice of calm amid Ferrell’s madness. She’s charming and rocks a fantastic Icelandic accent that’s more an homage than mocking.

On brand, Ferrell is also a treasure (even when his films flop), but he’s one part of a memorable and equally zany cast. Demi Lovato as a ghost (just watch), Graham Norton as a bougie version of himself and a host of recognizable faces and cameos pepper the film.

This is premium easy viewing, the kind of film best enjoyed when heavier visual experiences feel like too much (and there’s a lot of that feeling right now). At minimum, “Eurovision” exposes a new generation to a piece of European pop culture likely unknown this side of the ocean. In the right circumstance, it becomes something more touching, a delightful bit of popcorn entertainment. Let’s call this a win for Ferrell and, more so, McAdams.