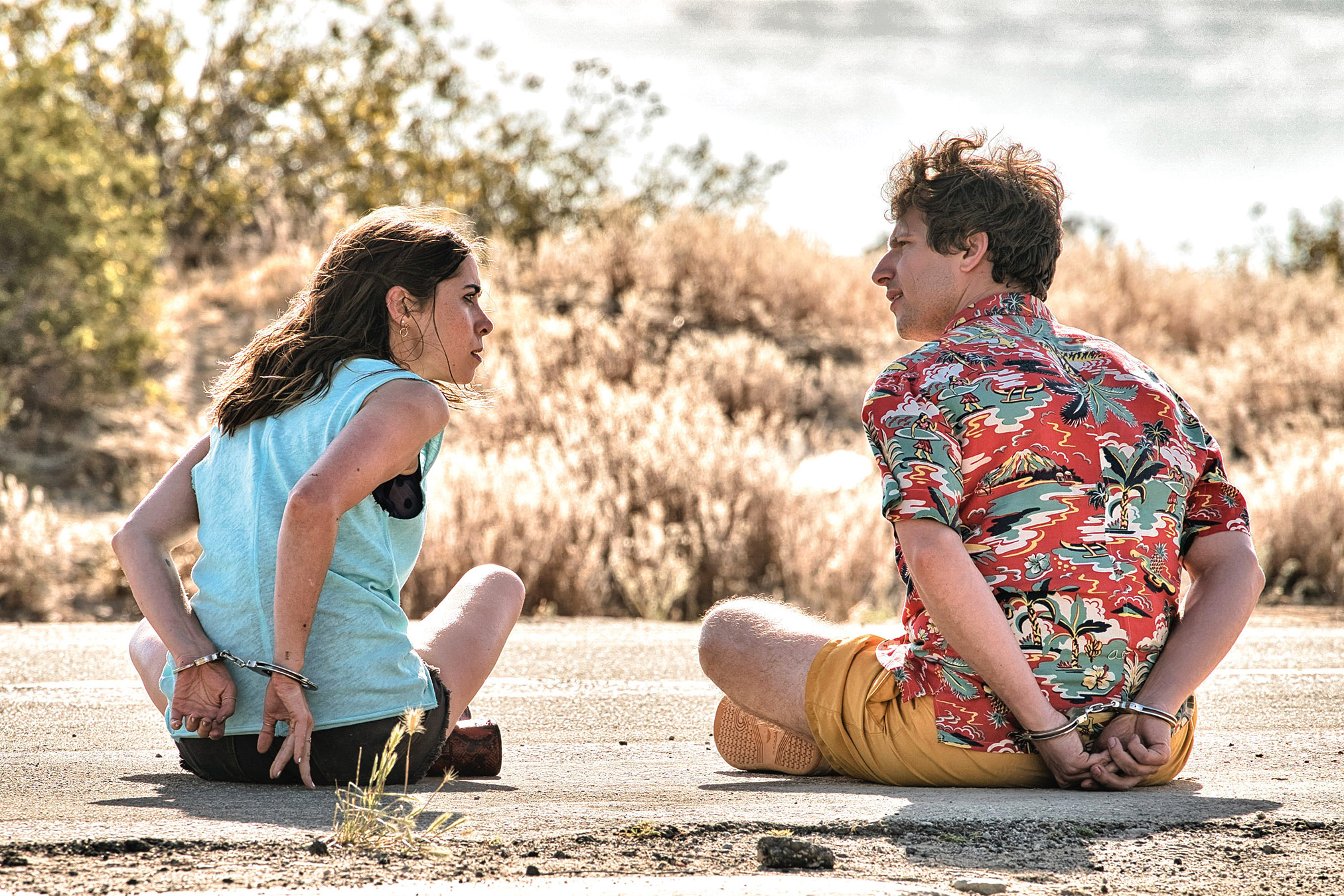 Nyles (Andy Samberg) and Sarah (Cristin Milioti) find themselves in many predicaments in “Palm Springs.” (photo courtesy of Hulu)

Thank you, Andy Samberg and Cristin Milioti, for disrupting quarantine monotony with a story entirely about, well, monotony. Hulu Original “Palm Springs” parades as a quirky indie flick dubbed a comedy in name only. Not the case. Instead, a wacky science fiction premise and splendid on-screen chemistry culminate in the ultimate summer movie experience equally engaging and funny.

If you know nothing about this film and like to be surprised, then stop reading and go watch it. Going in without any expectations can be a satisfying ride. If you need to be sold first, carry on.

What’s more timely than repeating the same day for eternity? At least Nyles (Samberg) enjoys his own “Groundhog Day” in style, lounging around Palm Springs, hopefully during a non-scorcher, drinking until a wedding kicks off. But even a good day experienced hundreds, thousands (perhaps more) of times might convert the staunchest optimist into a nihilist. Frankly, Nyles’ time loop has lasted so long that he doesn’t clearly remember life before. Plus, girlfriend Misty (Meredith Hagner) quietly concurs with Nyles’ relational indifference. If only an earthquake didn’t expose this poor guest to an anomaly that would pause his life indefinitely.

Then comes maid-of-honor Sarah (Milioti), as jaded as Nyles, without help from a glowing red light in a cave. Despite efforts to keep her away, Sarah gets pulled into the time loop, forever reliving the day her little sister (“Riverdale’s” Camila Mendes) married the “perfect” guy, Abe (Tyler Hoechlin, Superman across various CW shows). Sarah’s a hot mess; Nyles is the Camusian idealist. Of course, shenanigans commence, then a bit of hope, proving dire straits go down easier when you’re not alone.

Unlike Bill Murray’s best film (I will die on this hill), “Palm Springs” feels no obligation to present the concept to us like we haven’t experienced it before. Don’t we already know this story well? From “Edge of Tomorrow” and “Happy Death Day” on the big screen to “Supernatural,” “Buffy” and several outings across “Star Trek” series, the premise is always the same. Nyles quickly catches Sarah up, providing her with the lay of the land and obligatory science speak.

That said, don’t expect a shameless rip-off of “Groundhog” (time-loop stories actually go back to the 1940s, perhaps even earlier), which focuses on what happens to one isolated protagonist. “Palm Springs” highlights what transpired after that phase ended. What if love caused Murray’s Phil to drag Rita in with him? Now add to that “what if” an R rating and a more honest exploration of how folks might pass the time when time has no meaning. 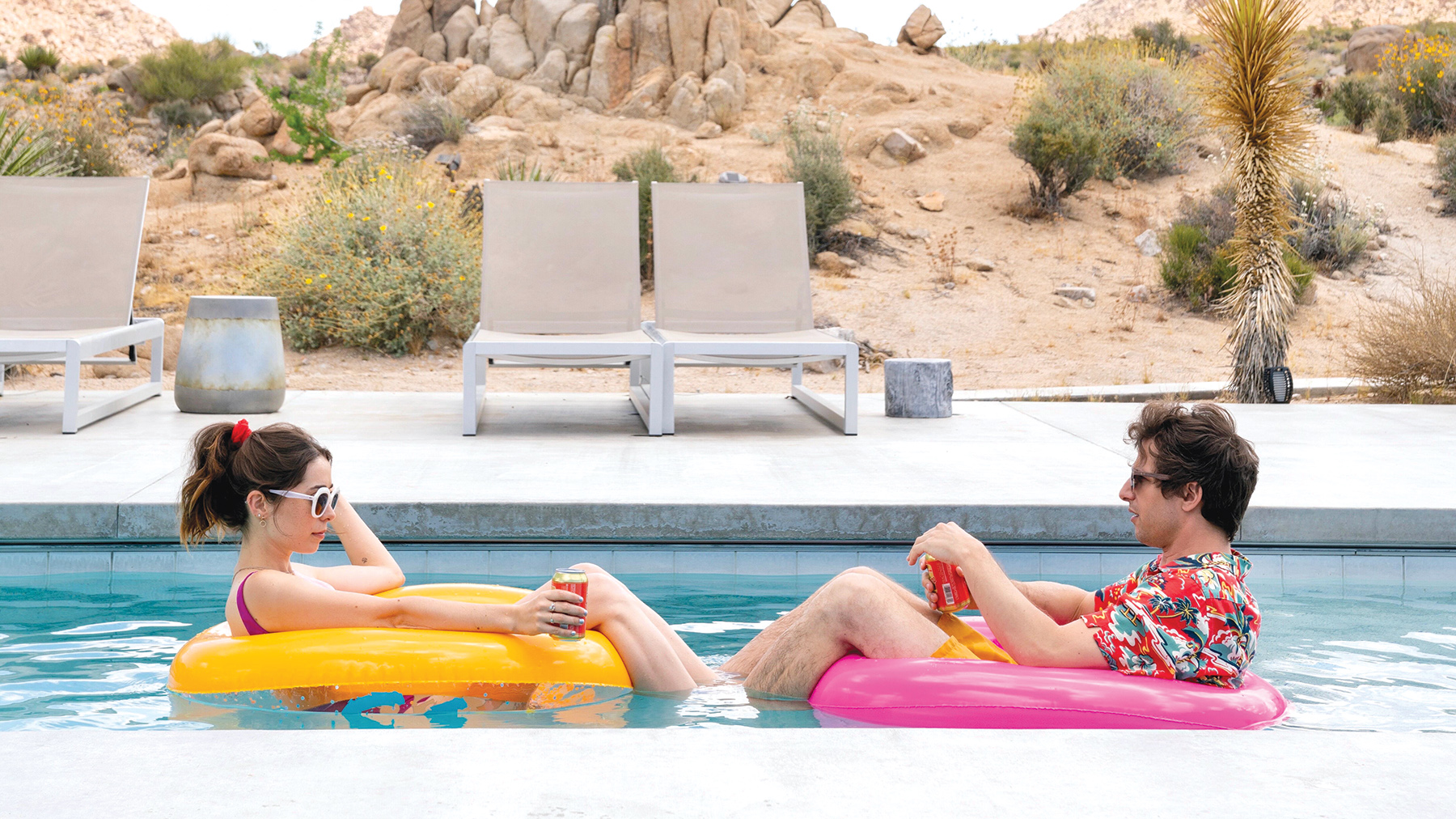 “Palm Springs” is a fun summer movie about living the same day over and over again. (photo courtesy of Hulu)

Samberg is a delight on screens big and small. “Popstar: Never Stop Never Stopping” is a solid parody of music celebrities, laced with hilarious songs from his actual rap group the Lonely Island. And “Brooklyn Nine-Nine” remains one of the best comedies on prime time. Mind you, his acting chops are limited to one kind of role perfected over time. Why go for range with a  comic delivery and charm that work so well, especially alongside his co-star?

Milioti’s performance here should make us all wonder why she hasn’t landed more jobs. Oddly, the last major project she did was 2017’s quite memorable episode of “Black Mirror” called “USS Callister.” Yes, it’s a great entry, led well by her, but nothing adds to her demo reel like “Palm Springs.” A little crazy, a tinge of tragedy and her token smirk, Milioti best be cast in more.

And without spoiling a single thing about this character, prepare yourself for Roy (the mighty J. K. Simmons), a wedding guest who knows how to party. As usual, Simmons’ presence can best be described as delightful (just watch the film – I can’t say more).

A special tip of the hat to relative newcomers, writer Andy Siara (“Lodge 49”) and Max Barbakow, helming his first feature film. This marks the start of hopefully more original ideas to come, with Milioti leading them all, of course.

A major strength of “Palm Springs” is how much it cares about Sarah and Nyles. Sarah isn’t the bubbly free spirit who reminds Nyles why life’s worth living, and Nyles’ deadbeat persona doesn’t originate from a personal flaw but a dominating cycle that controls his everything. They both have some metaphysical soul searching to do. And “Palm Springs” effectively peppers those philosophical nuggets of inquiry throughout Sarah and Nyles’ various adventures as far as a day can take them … unless they die – then the day resets.

Greenway Court Theater prepares to ‘Get Down’ online