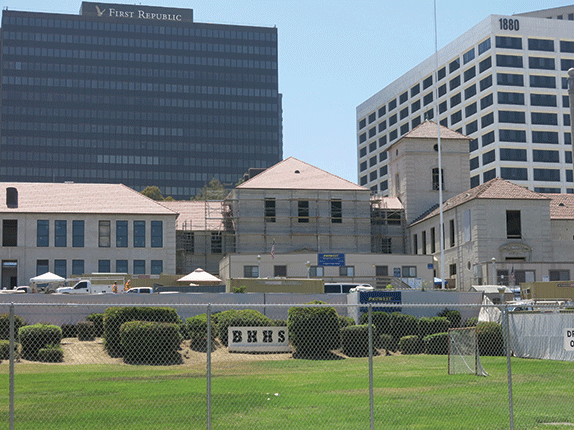 School repairs and upgrades, including at Beverly Hills High School, are paid for through a pair of bond measures. (photo by Cameron Kiszla)

The Beverly Hills Unified School District is doing an overall good job in spending and accounting for the money raised by its two bond measures, the district’s Citizens Bond Oversight Committee said in its annual reports released last month, though the reports noted that there’s still room for improvement in some areas.

The annual reports – one for each bond measure for each fiscal year – monitor the district’s actions in fiscal year 2018-19 regarding the spending and accounting of money raised by Measure E and Measure BH. The reports are released by the seven-member CBOC, which relies on two annual audits by outside firms. The financial audit was performed by Moss, Levy & Hartzheim LLP, and the performance audit was performed by Moss Adams LLP.

“Based on the audit reports, they confirmed that the expenditures are in accordance with bonds and the language of the bonds,” said Mary Wells, who co-chairs the CBOC’s audit subcommittee.

The committee does not decide if the district’s actions are the best way forward; instead, they ensure the actions taken are done in accordance with the bond measures and general best practices.

The committee also had advice for the district on how best to move forward. For instance, the report’s recommendations include that the district seek multiple bids for projects, use competitive pricing to ensure the district is getting the best value and effectively document that the proper procedures are being followed in the bidding process.

“It’s not that we think they’re overpaying, but just like if you or I were to remodel a kitchen, it’s always best to have multiple bids to make sure we’re getting a fair price. It’s just common sense and good to do that as a best practice,” said Rich Baron, chair of the CBOC.

The committee also praised the district for its improvement in ensuring invoices are paid on time. In 2018, 31 invoices were not paid in a timely fashion, the report said, though in 2019, that number dropped to five.

Wells, who has announced plans to run for a seat on the school board later this year, noted that the district has “improved tremendously” when it comes to paying invoices on time.

“The way of managing the financial budgeting and reporting and practices are much improved, I mean, tremendously improved. This audit highlights things they can continue to do and continue to do better,” she said.

In an email, J. Wade Roach, assistant superintendent of business services for the BHUSD, noted that the Business Services office and the Facilities office have worked “collaboratively to improve routing and approval processes” and the district will “continue to strive to make timely vendor payments and track liens on contractors and subcontractors that could slow the process of construction.”

“In the past, actual physical pieces of paper, invoices and things like that, went from one desk to the next,” Roach said. “We have moved these processes into the digital era, and now utilize electronic signatures whenever appropriate.”

The CBOC raised concerns about the district’s practices when it came to a pair of projects: the district’s lawsuit against Metro over the Purple Line Extension subway project and the capping of oil wells at Beverly Hills High School.

In both cases, the district did not establish budgets for the projects, which can allow “unplanned expenses … to result in diverting funds from [other] budgets,” according to the report, which also criticized the strategy as a “‘blank check’ approach.”

Wells admitted that it is hard to budget for expenses like these, as the costs are “very difficult to estimate,” but it’s better to have a budget and need to adjust it, as opposed to not having a budget.

“It’s been somewhat of a hard-to-estimate cost, but they should do their best to put in estimates that go into their master plan and master budgeting. It’s been effectively impossible for them to estimate those costs,” Wells said.

The Metro lawsuit ended in May when a federal judge ruled against BHUSD, costing the district $18.3 million in Measure E funds, according to the CBOC. The oil well remediation project is nearing completion, with a few months left of work, according to Roach.

The remediation is being paid for with Measure BH funding, and the district has estimated the total cost to be more than $29 million, of which the city will pay $11 million, according to the report, though Roach noted that the district’s outside experts now expect the project to cost a maximum of $32 million.

“Staff will keep the board informed if the project runs into any other complications that could increase costs above this currently projected amount,” Roach said.

The CBOC also had plenty of praise for the district.

“The money started being spent well before I joined the CBOC [five years ago], and over time, the school district has done a much better job of spending the money efficiently,” added Richard Schreiber, a member of the audit subcommittee.

Schreiber also praised the addition of Team Concepts Development Services as the managers of the district’s bond program in 2017, which has “improved substantially” the construction work, Schreiber said.

Roach said that TCDS assembled a quality oversight group for the district’s “many diverse projects.”

“Don Blake, the principal of TCDS, has created a team of experts in various construction management areas that assist in keeping our projects on track and within budget,” Roach said.

Roach also had praise for the CBOC and the BHUSD community.

“The board appreciates the hard work of the CBOC and the support of the community that has made Measure E and Measure BH possible,” Roach said.