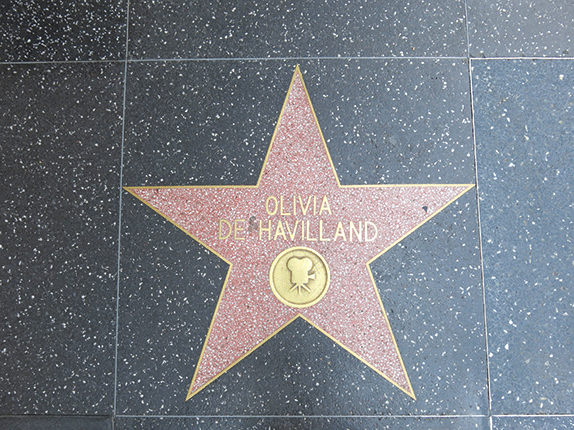 Olivia de Havilland was honored with a star on the Hollywood Walk of Fame in 1960. (photo by Cameron Kiszla)

Academy Award-winning actress Olivia de Havilland died on July 26 at the age of 104.

De Havilland, who won two Oscars for Best Actress for “To Each His Own” and “The Heiress” and starred in “Gone with the Wind,” also was a founding member of the Screen Actors Guild.

In a statement, SAG-AFTRA mourned de Havilland’s passing and said her “legal action against studio overreach set a precedent which echoes to this day.”

“Olivia de Havilland was not only beautiful and talented, she was a courageous visionary and an inspiration to generations,” SAG-AFTRA President Gabrielle Carteris said. “She was a founding member of Screen Actors Guild in a time when organizing and joining a union was often a dangerous enterprise. She sued her studio, Warner Bros., in 1943 for extending her contract past its original seven-year expiration date. SAG-AFTRA members will be forever grateful to Ms. de Havilland for her contributions to the founding of our union and the protection of its members. She was a marvel and a legend. Rest in peace.”

De Havilland’s star on the Hollywood Walk of Fame is located at 6762 Hollywood Blvd. For information, visit sagaftra.org.