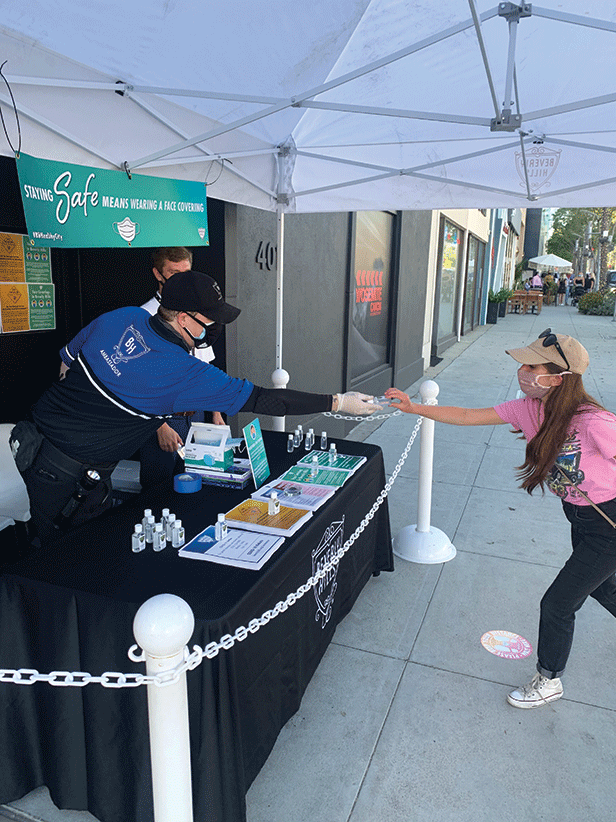 Beverly Hills is staffing booths in its the business district and parks on Fridays and Saturdays with COVID-19 and face-covering information. (photo courtesy of the city of Beverly Hills)

On July 21, the Beverly Hills City Council expressed support for OpenBH, the city’s outreach initiative for local businesses, but rejected the idea of full street closures to better accommodate diners, shoppers and pedestrians.

As part of OpenBH, city staff members contact local business owners to see what the city can do to help their businesses during the coronavirus pandemic, and the program has resulted in changes like the city allowing businesses to use special event permits to create outdoor dining areas. The city also waived the special event permit fees, which are approximately $800.

As part of OpenBH, city staff and the Beverly Hills Chamber of Commerce asked the owners of businesses on South Beverly Drive and North Canon Drive if a full street closure would help them, and while there was some support, other business owners – including those who operate retail stores or offer curbside pickup – were concerned about the potential loss of access, according to the staff report. That dynamic was echoed during the public comment portion of the meeting, with callers arguing both sides of the issue.

Vice Mayor Robert Wunderlich argued that the idea of street closures did not garner enough momentum to be implemented.

“You need a critical mass [of support] for success,” Wunderlich said.

The door was left open for closures of individual street lanes or the creation of parklets in street parking spaces, though the implementation of either would require future consideration by the City Council.

The council members also discussed some of the concerns they had about the way businesses currently operate outdoors. In some instances, diners are awaiting their tables outside the restaurants, which could allow the coronavirus to spread between those waiting, and some restaurants were even serving their guests beverages while they wait, which encourages the diners to take their masks off to drink, Mayor Lester Friedman said.

Several council members called for more enforcement of the city’s health and safety rules, which resulted in multiple citations this past weekend.

“For any of these programs to be successful at all, we need to do a better job of enforcing the rules as a city,” Councilman John Mirisch said.

According to city spokesman Keith Sterling, between July 17-20, 32 citations were issued for coronavirus-related infractions, including 23 for no face covering, two for lack of social distancing and seven for non-compliant businesses. Nearly 4,300 contacts were made with individuals and businesses, he added, and the city is “staffing booths throughout the business district and parks on Fridays and Saturdays with helpful COVID-19 and face-covering information.” Sterling added that five more citations were issued on July 21, three for businesses out of compliance and two for people not wearing masks.

In Beverly Hills, the fine for not wearing a mask is $100 for a first offense, $200 for a second offense and $500 for a third and subsequent offenses.

Councilman Julian Gold proposed the city could explore setting up staging areas, places where guests could wait for their turn to dine while practicing social distancing, in the city’s parking garages. Gold added that if any parklets were to be created, the city would need to ensure that proper health and safety measures are taken not only by diners, but also by pedestrians and others who may try to enter the outdoor dining areas.

“I think we really have to become the gatekeeper for people who are passing into these things and the policemen, as it were, for the areas that surround them,” Gold said.

Friedman added that he’d like to see more enforcement from the restaurants and their employees.

“They’re a force-multiplier in terms of enforcement on this … If a person who is noncompliant if they’re in line or waiting or hanging around … maybe the restaurateur should say ‘maybe this isn’t the restaurant you want to be at.’ The businesses can all be helpful to us,” Friedman said.

In addition to the expectant diners waiting their turn, council members were also concerned about the impact sidewalk dining and parklets might have on passing pedestrians, who might be funneled together in the smaller spaces.

Several council members also expressed concern that some types of businesses allowed to operate outdoors might not work well with their neighbors. As an example, Mirisch mentioned hair salons and barbershops, which Gov. Gavin Newsom announced earlier this week could resume operations outdoors, might send loose hair flying into food and diners at adjacent restaurants.

“We need to think about the compatibility of uses and if that makes sense, and there may be some situations where, because of that, it doesn’t work,” Mirisch said.

However, if residents, visitors and businesses do well in protecting the health and safety of customers and employees, the city could use that to the advantage of local businesses, council members said. During public comment, Todd Johnson, president and CEO of the Beverly Hills Chamber of Commerce, proposed that the city could grade the health and safety protections implemented by businesses, and those with high scores could be advertised as safe places for people to shop or dine.

“I think we should really look into that. As we’ve said, we want to be a healthy city, a safe city. I think if we show this community and the world that we have a thriving restaurant and retail [community] and we can grade [the businesses]. If a restaurant gets an A in COVID safety, I guarantee you they’ll be thriving and they’ll be successful,” Bosse said.