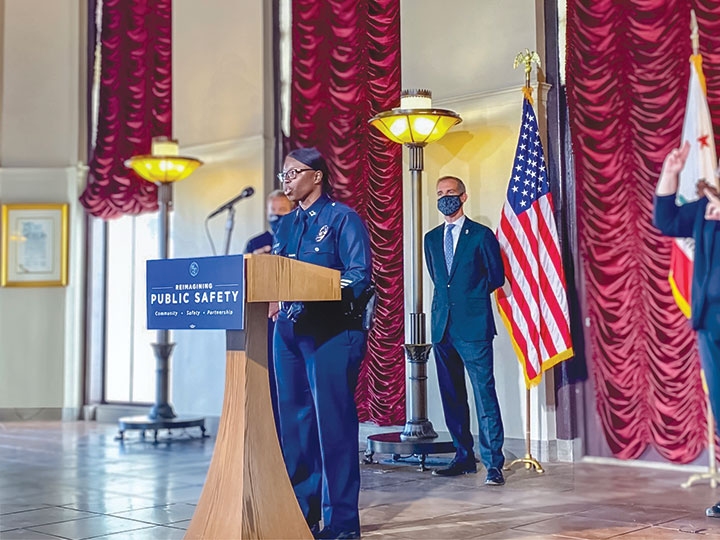 The nationally-recognized model for community policing will be expanded at 10 public housing sites and the surrounding neighborhoods where it is already in place and brought under the command of a single new LAPD bureau. Aspects of the program, including its training curriculum, will be integrated throughout LAPD operations. Garcetti made the announcement with law enforcement officials and city, community and civil rights leaders.

“We [are taking] a major step forward in our work to reimagine policing in Los Angeles and strengthen the human bonds that are essential to public safety,” Garcetti said. “Every Angeleno deserves to feel secure not only in the parks and streets of their neighborhoods, but in the presence of people in uniform, and expanding CSP will help to make that possible.”

CSP places specially-selected and trained officers in a five-year assignment in one place so they can become part of the community and develop relationships with the residents.

“Our CSP officers are measured by the trust they build and the relationships made, rather than arrests or citations,” LAPD Chief Michel Moore said. “This commitment to creating safe and healthy communities saves lives. I am confident our CSPs will meet this historic moment in policing and build public trust in law enforcement.”

In a recent UCLA study of the CSP model, residents in two sites reported feeling safer, and an estimated 220 violent crimes were prevented over a five-year period.

“[This] marks a step forward for community policing,” said Councilwoman Monica Rodriguez, 7th District, chair of the City Council’s Public Safety Committee. “Like any relationship, trust is earned and the creation of this CSP Bureau builds safer neighborhoods and strengthens the trust and respect between the community and law enforcement.”

CSP was launched in November 2011 as a collaboration between the LAPD, Housing Authority of the city of Los Angeles and the Mayor’s Office of Gang Reduction and Youth Development. Initially conceived for the Jordan Downs housing development in Watts, CSP has expanded to 10 sites, including to neighborhoods outside of public housing developments.

The CSP Bureau will be led by Deputy Chief Emada Tingirides, in partnership with a civilian commander and a regional advisory council tasked with developing effective strategies that can be implemented beyond CSP sites.

“It is the honor and privilege of my professional life to accept this role,” Tingirides said. “I have devoted my career to building relationships and engaging the community where I grew up. I have watched our Community Safety Partnerships flourish with lowering crime while lifting public trust.”

In the CSP model, residents work alongside officers to reduce crime by developing sports, recreation and other programs tailored specifically to their community; focusing on quality of life issues; and bridging gaps in communication and trust between residents and the LAPD. CSP partners also focus on connecting people in need with resources such as employment training, mobile medical programs and counseling.

The initial establishment of the CSP Bureau will be cost-neutral and will occur within the LAPD’s existing budget.