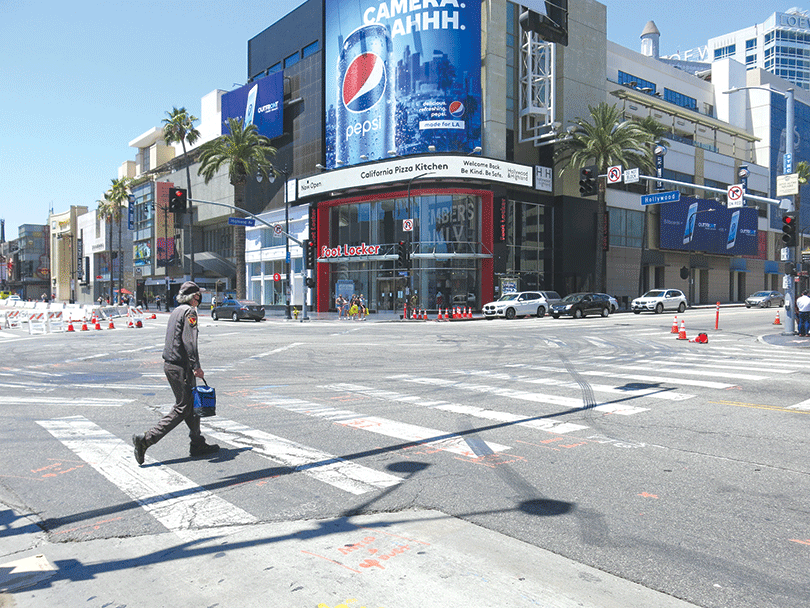 Police are concerned about street takeovers and the violence that can occur, as it did at a street takeover at Hollywood and Highland. (photo by Cameron Kiszla)

A 33-year-old man from El Paso, Texas, has been arrested and charged for the murder of a teenage girl who police said was an innocent victim shot and killed on July 26 at a street takeover in Hollywood.

The 17-year-old victim from Huntington Park identified by the  Los Angeles County Office of Medical Examiner-Coroner as Alejandra Estrada, was standing on a sidewalk at Hollywood Boulevard and Highland Avenue watching the street takeover when she was struck by gunfire. Police believe the suspect fired shots during a fight and accidentally struck the victim. A man in the crowd was also struck by the gunfire and injured, police said.

Videos posted on social media show vehicles driving in circles with tires burning rubber in the intersection and a fight breaking out in the crowd of spectators. Gunshots can be heard on one of the videos.

Detective Tyler Adams of the Los Angeles Police Department’s West Bureau Homicide Unit said it was the first homicide he knew of related to a street takeover, which involves people blocking intersections and drivers in high-performance sports cars spinning their tires and driving in circles. Known as “drifting,” the vehicular stunt was made popular in the “Fast & Furious” films.

Adams said the LAPD received a 911 call about the street takeover at Hollywood Boulevard and Highland Avenue shortly after midnight on July 26. When officers arrived, they were directed to the victim on the sidewalk. Paramedics pronounced Estrada dead at the scene.

Adams estimated between 100 and 200 people were in the crowd watching the vehicles. A group of people started fighting and one pulled out a gun and started shooting, police said. The group hurriedly dispersed after shots were fired, he said.

LAPD officials investigating the case were notified at approximately 3:45 a.m. the same morning that Los Angeles County Sheriff’s Department deputies had arrested a man believed to be the gunman. The suspect, Ramon Roque Monreal, was taken into custody near 223rd and Figueroa streets in Carson for an unrelated offense, and deputies received information that allegedly linked him to the shooting, Adams said. Monreal was in possession of a firearm, police said. The Los Angeles County District Attorney’s Office charged Monreal on July 28 with one count each of murder and attempted murder. He faces 80 years to life in state prison if convicted.

The defendant has an address in El Paso, Texas, but detectives are still determining how long he had been in Los Angeles. Adams said he did not know why the fight started.

“It is my belief that no one knew each other. There was some type of dispute about who knows what,” Adams said. “I don’t know who the organizers were or whether it was an individual or a group. It just seems like they were all there for the street takeover. We are investigating the shooting and the events leading up to it. There were lots of videos posted on social media.”

Formerly a problem primarily occurring in South Los Angeles and the San Fernando Valley, street takeovers recently became more frequent citywide. The takeovers are organized on social media at high-profile locations. Crowds show up spontaneously, leaving police with few options for preventing or stopping the takeovers. Many times, police only know about them when they receive a call or officers happen to be nearby.

In the LAPD’s Wilshire Division, where more street takeovers have occurred in recent months, authorities created a program encouraging people to send police videos. The goal is to identify registered owners of cars and send letters warning them that their vehicles were potentially involved in a crime. Police hope that will be a deterrent.

The LAPD has a street racing task force that operates at times when racing and street takeovers occur, mostly on weekends. The task force has a zero-tolerance approach and arrests are made and vehicles impounded if they were involved in street racing or takeovers. Part of the approach is to monitor social media in an attempt to determine when and where street takeovers will occur. Officials in Hollywood are also planning more aggressive enforcement.

“Prior to [last] weekend’s tragic murder, street takeovers had not been very prevalent in Hollywood Division. We had seen them occasionally before the COVID-19 pandemic, but I cannot remember hearing of any in Hollywood since about March,” said Capt. Scot Williams, commanding officer of patrol at the Hollywood Division. “Obviously, we do not condone street takeovers because of the inherent dangers they pose to spectators, the damage they cause to our streets and the traffic congestion that typically results from them. Officers from Hollywood Division, especially those assigned to the entertainment district, are proactive in their enforcement efforts and have been successful in deterring large-scale street takeovers recently. What happened Sunday morning will only intensify those enforcement efforts should another group decide they want to take over the streets of Hollywood.”

Anyone with further information about the alleged murder or video footage of the street takeover is urged to call detectives at (213)382-9470.