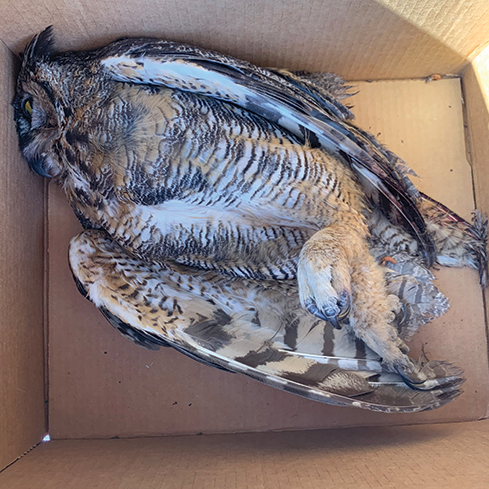 In May, a great horned owl was killed by rat poison in Griffith Park. (photo courtesy of Allison Brooker)

On June 25, Friends of Griffith Park announced a new effort to urge Gov. Gavin Newsom to enact an emergency moratorium on the use of second-generation anticoagulant poisons following the confirmed rat poison death of a female juvenile great horned owl near Griffith Park.

FoGP, along with numerous organizations across the state that are concerned about wildlife and the environment, supports Assembly Bill 1788, which, if passed, would ban the sale of second-generation rodenticides.

In the Santa Monica Mountains, 92% of bobcats, 83% of coyotes and 94% of mountain lions tested were exposed to anticoagulant poisons. Of 105 bobcats tested, more than 70 died from rodenticide-related causes. Twenty-one mountain lions out of 22 were exposed, with four dying from these poisons. A study conducted by the California Department of Pesticide Regulation and the California Department of Fish and Wildlife from 1995 to 2010 found residues of the poison in 75% of the dead animals studied. Animals adversely affected by the poison include barn owls, bobcats, coyotes, raccoons and the endangered San Joaquin kit fox, among many others.

While second-generation rodenticides were removed from store shelves in California in 2014, many pest-control companies, including well-known brands such as Orkin, EcoLab and others, continue to use them routinely, taking advantage of a loophole in the law that AB 1788 is trying to close. Customers are often unaware that these poisons are being utilized on their properties and are not informed about alternate pest mitigation strategies that are highly effective and do not negatively impact the ecological food chain.

In May, FoGP decided to fund a necropsy of a great horned owl that was found by a resident of Beachwood Canyon near Griffith Park. The lab results documented an extremely high level of difethialone, and trace amounts of brodifacoum and bromadiolone, three chemicals in a class of potent second-generation anticoagulants. The cause of death finding in the final report is anticoagulant toxicity. Likely, a mouse or rat ate the poison from a bait box, and then the rodent was nabbed by the owl, one of their favorite menu items.

“This is more than just an isolated incident of an owl or other raptor succumbing to rat poisons,” said Dan Cooper of Cooper Ecological Monitoring, scientific advisor for Friends of Griffith Park and the Griffith Park Raptor Survey. “Bobcats, mountain lions, gray foxes and coyotes are well-documented victims of rodenticides in our local urban wildlife.”