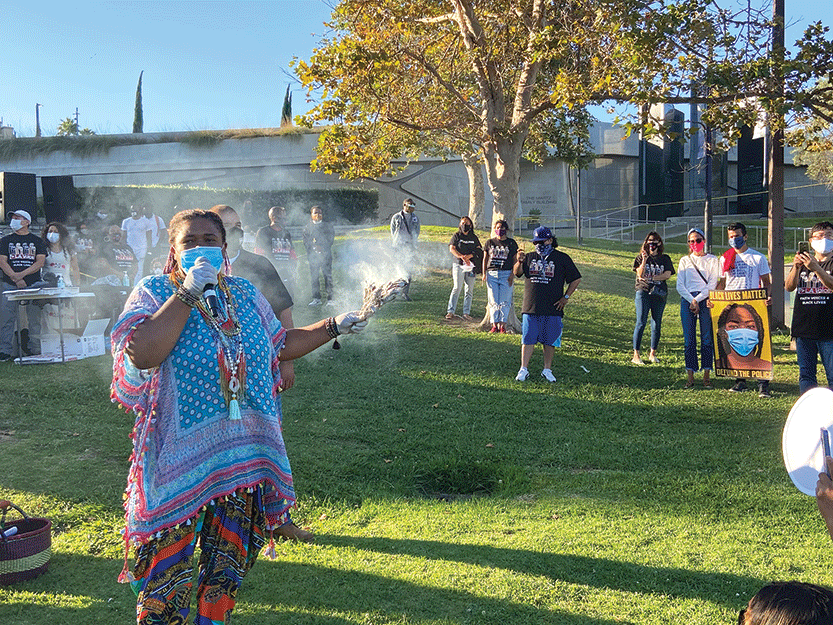 Pastor Thembekila Smart, of the Christ Liberation Ministries, performed a South African ritual in celebration of ancestors during the interfaith ceremony in Pan Pacific Park. (photo by Edwin Folven)

Approximately 200 people gathered on July 19 in Pan Pacific Park for an interfaith ceremony in support of Black lives.

The ceremony was organized by LA Voice, a multi-racial and multi-faith nonprofit whose mission is to empower individuals to create positive change in their communities. It was held in remembrance of George Floyd, Breonna Taylor and many others who have lost their lives at the hands of police, and to call for racial equality. The group, wearing masks and social distancing, assembled on the grass in front of an amphitheater steps away from the Los Angeles Holocaust Memorial, which commemorates lives lost during World War II to the Nazis, and listened to speeches and music. Speakers hoped participants were inspired to continue working toward societal reform.

“We are one of many voices that [have] a responsibility to speak up in this moment. Many faith leaders have been doing so, and frankly, the leaders of Black Lives Matter a month ago challenged clergy to step up more. I think that is part of what you are seeing,” said the Rev. Zachary Hoover, executive director of LA Voice and a deacon at the First Baptist Church of Pasadena. “Our own spiritual and religious traditions come from various scriptures, but when we read them from the heart, they are all about helping our neighbors, creating systems for thriving. We have folks here from Compton, Inglewood, the San Fernando Valley, the San Gabriel Valley and Long Beach, and we have denominational sponsors that cover the entire region, so you can really see the diversity.”

LA Voice is comprised of 57 churches, synagogues and mosques representing more than 40,000 families. The organization includes Blessed Sacrament Catholic Church and St. Stephen’s Episcopal Church in Hollywood, and Temple Israel of Hollywood and Beit T’Shuvah. Other members are located throughout Los Angeles County.

“We want to be part of the solution,” added Beverly Grove resident Adam Weiss. “It’s great to be here and be involved and be part of change.”

The ceremony started with Pastor Thembekila Smart, of the Christ Liberation Ministries in South Los Angeles, performing a South African ritual in remembrance of ancestors and to bring together the community. Rev. Michael Fisher, of the Greater Zion Church Family in Compton, addressed the crowd and called on people to seize the moment.

Other speakers called for police reform and for candidates to stop accepting contributions from police unions. They urged people who want their voices to be heard to vote in the Nov. 3 election. But mostly, the speakers from diverse ethnic backgrounds spoke in support of Black lives. 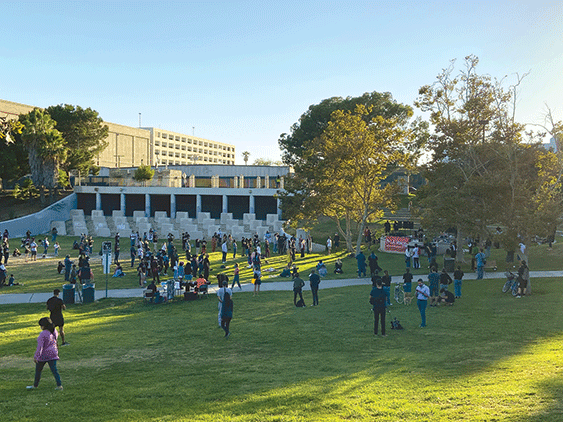 “As Hispanics and Latinos, we join the Black Lives Matter movement,” said Sergio Navarrete, superintendent of the Southern Pacific District of the Assemblies of God. “These lives, Black lives matter. As Christians, we know what God desires in our nation, and he desires justice and righteousness.”

Hoover added that he hopes people will continue to support LA Voice’s mission and encouraged people to visit the organization’s website to get involved.

“We believe in equality for all people,” Hoover said. “We are one of many voices.”

Pastrami is piled oh so high at Canter's Deli