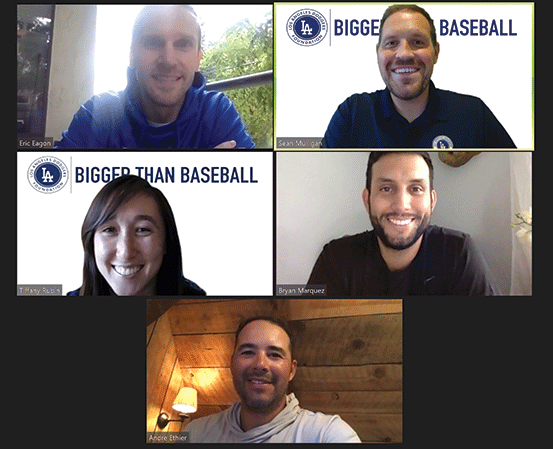 Andre Ethier, bottom, offered lessons for other baseball coaches during a training session on July 16. (photo courtesy of LADF)

The Los Angeles Dodgers Foundation continued their virtual Dodgers RBI season on July 16 with its seventh coaches training featuring Dodger alumnus Andre Ethier. Ethier joins the series not only as a two-time All Star, Silver Slugger and Gold Glove winner, but also as a parent and youth sports coach.

Over 250 Dodgers RBI volunteer coaches and parents registered to hear his approach to youth development during an interview by LADF and Dodgers Training Academy staff.

During the virtual coaches’ session, Ethier shared the power of parents as coaches. His mother was a volunteer coach and his very first T-ball coach at the age of 4. His grandfather, also a professional baseball player in the 1940s and 1950s, was a major influence and reason for the baseball love running through his family.

Now as a coach himself, his passion for youth sports and keeping kids engaged in baseball is evident.

“I started coaching 8 to 10-year-olds, and I really just wanted to create and instill a love for the game,” Ethier said. “It’s been a blast. I have a real joy doing it.”

On creating boundaries as both a parent and coach, Ethier admits it can be tough.

“It’s not a serious game yet at this age. There is no benefit of winning other than the confidence of the kids,” Ethier said. “I try to be as diplomatic and as easygoing as I can. I want the kids to have the attention and know what’s going on on the field and get the accolades as to why the team is successful.”

Ethier has had important conversations with his own kids about the current pandemic.

“We’ll get back to doing this when we’re permitted and it’s the right opportunity and right parameters. There are other things we need to do civically, and our human responsibility is to put everyone in a safe position. We are not going to go out there and force baseball games,” he said.

Although new to the Dodgers RBI coaches training series, Ethier is no stranger to the work of the Los Angeles Dodgers Foundation. During his Dodger days, Ethier was an avid supporter of Dodgers Dreamfields, LA Reads, Breakfast in the Classroom and several of LADF’s grantees through his #DreDayz initiative which hosted youth for VIP experiences at Dodger Stadium. In 2014, LADF also partnered with Ethier and his wife, Maggie, to revitalize the learning center for the homeless men and women of Skid Row at Union Rescue Mission.