During pandemic, Normans do the write thing 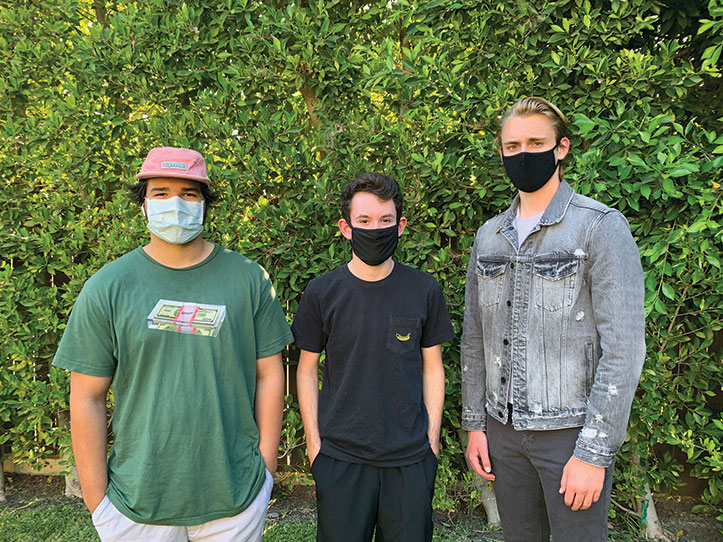 While learning from home this spring, some students took on extracurricular projects to help keep them focused and involved. Beverly Hills High School senior Jackson Lanzer had a particularly creative idea.

Lanzer, 17, convinced his friends and classmates Sam Wolf and London Anderson to help him start the BHHS Literary Magazine, taking the place of the now-defunct Norman Review, which ceased publication five years ago.

Lanzer, who serves as editor in chief, said he’s always been interested in creative writing and storytelling, and for his English class taught by Barbara Nealis, he designed a magazine for a class project.

About a month before the pandemic affected Southern California, Lanzer had the idea to take his newfound magazine knowledge and revive the school’s literary magazine. With the help of Wolf, Anderson and Nealis, who serve as faculty advisor, Lanzer used the extra time at home during the pandemic to make his idea a reality.

“I was looking for a way to be an avenue for my fellow students to publish poems, stories, anything creative … [And the magazine became] a distraction from the chaos of the coronavirus. It was a perfect distraction to take my mind off of it and put my mind to something more fulfilling,” Lanzer said.

The magazine, which is published online, also allowed students to channel their thoughts, fears and anxieties about the pandemic into an artistic endeavor without dealing with the pandemic directly.

“You can definitely see visible influence from the pandemic, but I don’t think anyone wanted to focus on it,” Lanzer said. “They took their emotions caused by the pandemic and turned them into stories.”

For instance, Lanzer said one of his short stories, “A Letter to Lost Dreamers,” was about “waiting to explore the world because I felt so isolated and bored in my house.”

“I took my emotions of wanting to explore and go outside and put that into a story,” he added.

Wolf, 17, another fan of creative writing, serves as associate editor. Wolf said he saw the same influence of “people contemplating their futures once they get out of their rooms” in stories and poems, including his own short story, “Dark Skies and Crashing Waves.”

“I had this story in my mind, something about my old summer camp that burned down in the wildfires, and that and the pandemic came together on the idea of a dystopian image of someone coming back to their old summer camp,” Wolf said.

Anderson, 16, serves as director of marketing, helped with graphic design and wrote the short story “Polluted Money,” which featured his interests in business, finances and the stock market. On the marketing side, Anderson focused on social media, using the skills he learned reselling clothing from the streetwear company Supreme on Instagram to solicit contributions and drum up interest in the magazine.

By taking the magazine and its marketing online during the pandemic, Anderson said the magazine could help students communicate and show off their artistic achievements.

“We want to make sure that even though there’s a pandemic going on, … we can still be connected through our stories and creativity,” Anderson said.

The students said they plan to put out another issue next year while mentoring younger students to take over the magazine once they graduate.

“I’m looking for an underclassman that can become an associate editor for the next edition, and we can train them on the different skills to run the magazine, and we can hand the reins to them so once I graduate, this magazine can live on and have a long life at this school,” Lanzer said.

“We don’t want to just have one edition and then call it quits,” Wolf added. “That would be awesome to have it continue under more people in the future.”

The three students all said they plan to continue writing to varying degrees after high school.

Lanzer said he’s not sure if writing will be something he’ll major in, but he’d love to join his college’s literary magazine, and it’s “a life goal” of his to publish a novel or contribute to a professional literary magazine.

Wolf and Anderson said writing is likely to be more of a side project as they get older, but the skills they’ve gained and the experience of putting a literary magazine together will stay with them.

“I think in anything you do, writing is essential,” Anderson said. “I think this magazine is a great example of how writing can connect the school, even when we’re not together.”