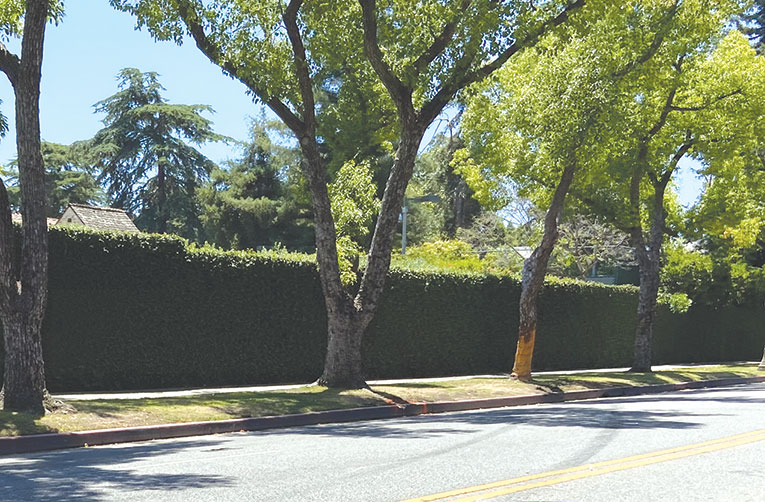 Skid marks were visible on the roadway the day after the collision on Sixth Street. (photo by Edwin Folven)

A 31-year-old man from Pasadena has been charged with vehicular manslaughter for a collision in June in which he allegedly crashed a high-performance sports car on Sixth Street, killing a male passenger.

The June 12 collision occurred just west of Irving Boulevard outside of Getty House, the official residence of the mayor of Los Angeles. Mayor Eric Garcetti came out to investigate after the 11:30 p.m. collision, police said. The vehicle, a McLaren 720S, went out of control and struck a tree on the south side of the road near the sidewalk. The passenger, Albert Young Ahn, of Los Angeles, was taken to a hospital and later died.

The driver, Chang Kuen Lee, 31, was also taken to a hospital and treated. He was arrested on June 17 upon release from the hospital and posted $50,000 bail, said Det. Olin Osborne, of the Los Angeles Police Department’s West Traffic Division. Lee faces one felony count of vehicular manslaughter with gross negligence, according to the Los Angeles County District Attorney’s Office.

Osborne said other drivers witnessed the McLaren traveling westbound at high speeds on Sixth Street prior to the collision. Police recovered footage from a dashboard camera aboard a ride-hailing vehicle that was also on Sixth Street at the time that shows the McLaren rapidly accelerating from stop lights. Lee is believed to have lost control of the vehicle as it accelerated away from Irving Boulevard. According to McLaren, the 720S has a top speed of 212 mph and can go from 0-62 mph in 2.9 seconds. The vehicle is registered to a business with which Lee has ties, and was not a rental, according to Osborne.

The detective said Lee was driving recklessly, which resulted in the collision and Ahn’s death. Police originally thought alcohol or drugs may have been a factor, but Osborne said that was ruled out by tests.

“It was basically a situation where it was determined to be gross negligence because of the speed,” Osborne added. “It was driving the car recklessly that resulted in the death.”

Lee pleaded not guilty to the charge on July 10. The next court hearing hasn’t been scheduled but will likely be held in late August, Osborne said.

Anyone with information about the collision is urged to call LAPD West Traffic Division investigators at (213)473-0234.