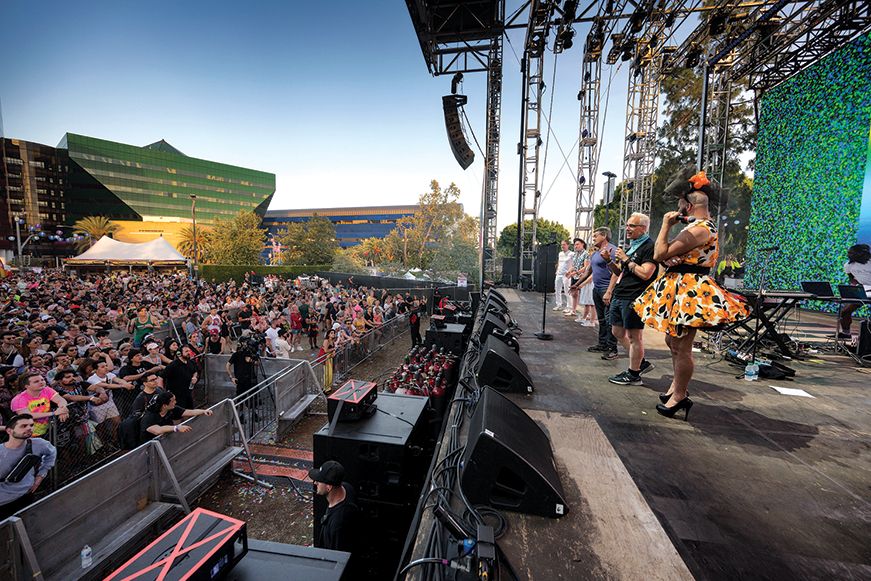 In 2019, West Hollywood and CSW celebrated Pride with crowds and live entertainment, but this year, events were canceled due to COVID-19. (photo by Jon Viscott/courtesy of the city of West Hollywood)

Christopher Street West, the nonprofit that organizes the LA Pride Parade and Festival, issued a letter to the West Hollywood City Council declaring its intent to move its 2021 Pride events out of the city and into a new location in Los Angeles.

The first LA Pride celebration was organized in downtown Los Angeles in 1970, and after that, LA Pride was moved to West Hollywood, where it has been held for the past 49 years. In the letter, CSW said its board of directors made the decision based on several reasons including construction at West Hollywood Park, the changing demographics of greater Los Angeles, CSW’s commitment to being responsive to LGBTQIA+ community needs and its alliance and collaboration with other movements for social change.

“This has been an ongoing conversation within our organization for the past year given how large the celebrations have become,” CSW Executive Director Madonna Cacciatore wrote in an email. “While we are still in a phase of gathering feedback and listening to the community, we felt it was important to notify the city of our intentions given our long-standing relationship with them as a partner in Los Angeles Pride.”

CSW board members also said they were grateful to the city of West Hollywood for the long partnership and collaboration in presenting LA Pride.

West Hollywood City Councilman John Duran said he had mixed feelings about CSW’s announcement. There are three decades of memories and relationships forged with former CSW leaders, he added.

However, in a Facebook post, Duran wrote that CSW has struggled for years to gain the trust and support of the community. During a virtual City Council meeting on June 15, both Duran and Councilman John D’Amico suggested that West Hollywood open the bidding to other possible producers besides CSW for the city’s annual Pride events.

Duran said the leadership at CSW has faltered over the years. He noted this year’s controversy regarding CSW’s attempt to organize a Black and LGBTQIA+ solidarity march.

CSW leaders had reached out to law enforcement for permits, and in their rush to organize the protest, did not get the full support of Black leaders. Ultimately, CSW was not involved in organizing the June 14 protest and march, and instead it was led by Black LGBTQ+ Activists for Change.

“This year’s mishap trying to hijack the Black Lives Matter movement was just the last example of the clumsy missteps by the organization,” Duran wrote on Facebook. “Trying to hijack a protest march during the middle of a pandemic and turn it into gay Pride was a serious error.”

He added CSW’s attempt to make it happen without the participation of Black Lives Matter and without working with the city showed disrespect for BLM and West Hollywood.

In the past, CSW’s LA Pride Parade and Festival has had a positive financial impact for West Hollywood and the county of Los Angeles.

In December 2019, CSW partnered with Beacon Economics, an independent research and consulting firm, to release an economic impact report. LA. Pride generated $74.7 million in economic output for Los Angeles County, and $27.7 million was concentrated in West Hollywood, according to the report.

Other key findings include $33.1 million generated over Pride weekend in 2019 for workers in the county, and of that amount, $14.7 million generated in West Hollywood. It also supported the annual equivalent of 397 jobs, and generated $896,000 in tax revenue in the city.

The City Council plans to consider initiating a public process to determine and select an event production company for LGBTQ Pride and Pride month events in West Hollywood at its regular meeting on July 20, according to a statement issued by the city.

“For many years, the city of West Hollywood and CSW have enjoyed a wonderful partnership,” the statement read. “The city extends its best wishes to CSW on future Pride activities.”

CSW is welcome to submit an application if it chooses, Duran said.

He added that WeHo Pride will be held next year in June, as long as the COVID-19 health crisis is under control.

“I wish CSW well, but WeHo Pride goes on,” Duran said. “ I look forward to the new creativity, innovation and excitement that will occur for June 2021 and the years that follow.”