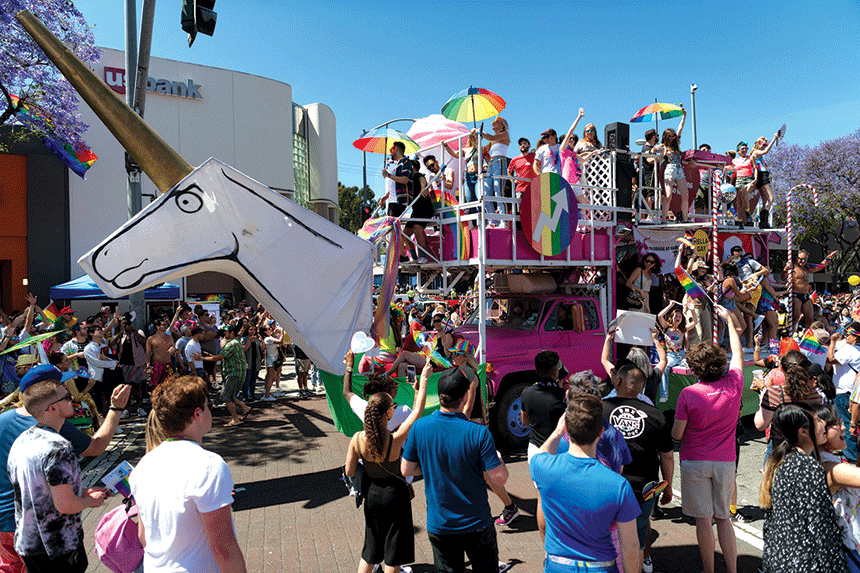 West Hollywood has begun devising a new version of Pride after CSW pulled out of the 2021 Pride event in the city. (photo by Jon Viscott/courtesy of the city of West Hollywood)

On July 20, the West Hollywood City Council unanimously approved moving forward with visioning workshops and community outreach programs to engage and hear from West Hollywood residents on what they hope future Pride events will include in the city.

Christopher Street West, the nonprofit that organized the annual LA Pride in West Hollywood  for the past 49 years, announced on July 15 that it would no longer be producing the 2021 events in the city. Councilman John D’Amico initiated the motion calling for community engagement in the planning process and is hopeful that future Pride celebrations will be organized by the city and potential partners.

“I want to be clear that I developed this item to ensure that going forward, West Hollywood would have access to the best possible set of events at the best price,” D’Amico said.

He added the item was an opportunity to begin the conversation with his fellow City Council members, city staff and the West Hollywood community.

“Now that CSW is no longer engaged or interested, and out of the discussion, we can truly reinvent our Pride experience,” D’Amico said. “I am grateful and excited to have the opportunity to move on.”

Councilwoman Lauren Meister agreed that it is an opportunity for the city “to press the reset button” and get feedback from the community and West Hollywood businesses.

“Our businesses have not been as engaged with, obviously planning, as that has been a CSW thing, but I think with all the money that we did contribute, I don’t really know we’re an equal partner,” Meister said.

She added the city should approach planning for future Pride celebrations with flexibility rather than creating something that is set in place for the long term.

Over the years, West Hollywood has provided significant funding for the CSW Pride Parade and Festival. The city provided approximately $2 million in 2019 and was set to contribute a little under $3 million this year until in-person 2020 Pride events were canceled due to the coronavirus pandemic.

Most of the costs for CSW’s Pride events were related to public safety based on the physical size of the event, large crowds and hours of operation, in addition to parking, permits and access to city facilities, according to a city staff report. Councilman John Duran said CSW’s Pride events have not evolved and changed over the years, and Pride will benefit from a new approach.

“After 50 years of doing Pride, it became stale and stagnant,” Duran said. “But it also got so caught up in some of the identity politics that consumed the LGBT community that it lost sight of what the whole weekend was supposed to be about.”

He added as the city moves forward with envisioning what 2021 West Hollywood Pride will be like, the city has to be prepared to look beyond the past and start with a completely clean slate. He suggested considering a month of programming instead of a weekend parade and festival, and possibly a multi-component celebration.

Mayor Pro Tempore John Heilman said he received emails from community members who were disappointed about the loss of the parade. The city is open to organizing a parade, festivals, music performances, cultural or art events, and city staff will remain open to new ideas, D’Amico said.

He also reminded his colleagues that whatever happens, they must be wary of possible First Amendment issues.

“I want us to go into this with a clear vision with things we can and can’t do as part of some city-sponsored cultural festival or parade, if that’s going to be a component of it,” Heilman said.

In response to Duran’s comment about CSW struggling with identity politics, Heilman noted that part of that was a result of the city’s effort to advocate for greater representation for the trans community and other LGBT people.

Mayor Lindsey Horvath thought the 2019 LA Pride, which included more family-friendly activities and community-based organizations, was successful, and she thought CSW was moving in the right direction.

Ultimately, the future of West Hollywood Pride is something all the City Council members said they look forward to considering. However, City Manager Paul Arevalo noted that any 2021 Pride celebrations will likely be smaller than past years due to the coronavirus.

After holding community outreach, getting input from various city boards and commissions, and hearing from businesses, city staff will return to the council this fall with a report. The council will then review the ideas and begin identifying potential producers for future Pride events.