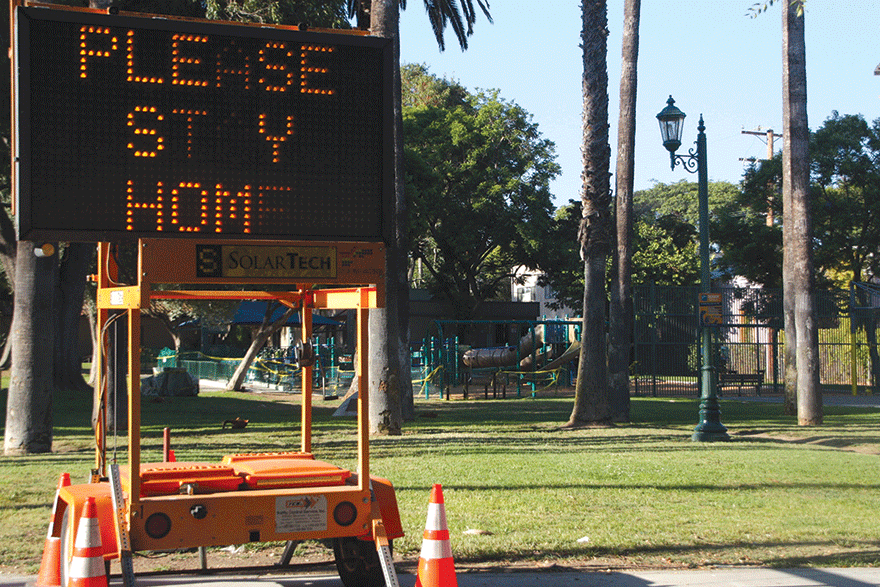 All West Hollywood city parks were first closed by emergency executive order on April 9 but reopened in June. (photo by Jose Herrera)

The city of West Hollywood closed its largest parks, West Hollywood Park and Plummer Park, on July 23 following numerous reports by city staff and West Hollywood sheriff’s deputies about people not wearing masks and not complying with rules adopted to curb the spread of COVID-19.

“At this point in time, there’s no specific timeline to reopen West Hollywood Park and Plummer Park. We are monitoring L.A. County Public Health data and we’re working to ensure compliance with face coverings requirements in all public places in the city of West Hollywood,” West Hollywood City Manager Paul Arevalo wrote in an email.

The two parks were closed, but dog parks at West Hollywood Park and William S. Hart Dog Park remain open to the public.

“The aim in keeping these smaller spaces open is to work as best we can to provide these amenities in a safe way,” Arevalo said. “City staff and sheriff’s personnel will closely monitor adherence to requirements for face coverings and social distancing in dog parks and on tennis courts.”

Arevalo added if there’s a trend toward lower rates in L.A. County COVID-19 transmissions, and if the community adheres to wearing face coverings and other safety measures, city staff will examine the progress and consider reopening the parks.

Approximately 50% of park users have failed to comply with face covering requirements and physical distancing protocols. Some people have also altered or destroyed protective barriers intended to keep playgrounds closed, according to a statement from the city.

Mayor Lindsey Horvath said the decision was unfortunate but necessary.  She also confirmed there were numerous instances of noncompliance that were particularly egregious, such as an individual who tore down a protective fence, and an instance in which a person who was not wearing a mask aggressively yelled at a sheriff’s deputy who offered to provide a free mask and information on COVID-19.

“People enjoy the parks and it’s important to have those spaces open,” Horvath said. “However, when people refuse to adhere to safety and health guidelines, it puts not only themselves at risk but their neighbors too.”

A first offense is $300. Arevalo reiterated that the citations are administrative and not criminal. Sheriff’s deputies issued 16 citations as of July 28, Arevalo said.

The tennis courts at West Hollywood Park and Plummer Park also remain open, but will be strictly monitored. Tennis players not adhering to health and safety protocols are subject to administrative citations as well as a one-year suspension of their membership in iTennis, the city’s organized tennis program, and court reservation privileges.

The tennis courts will remain open depending upon players following strict standards by the L.A. County Department of Public Health, and safe-practices issued by the United States Tennis Association, International Tennis Federation and the United States Professional Tennis Association. Details on the regulations are available by visiting weho.org/tennis.

More than 55% of L.A. County COVID-19 cases are now reported in individuals under the age of 40. While cases in that age range have so far shown to have a general lower risk of serious illness or death, L.A. County of Public Health officials are concerned that younger people may unknowingly infect others.

“Our message in West Hollywood is clear: community members must take personal responsibility in following face covering and social (physical) distancing requirements in order to keep themselves and others safe,” Arevalo wrote in an email.