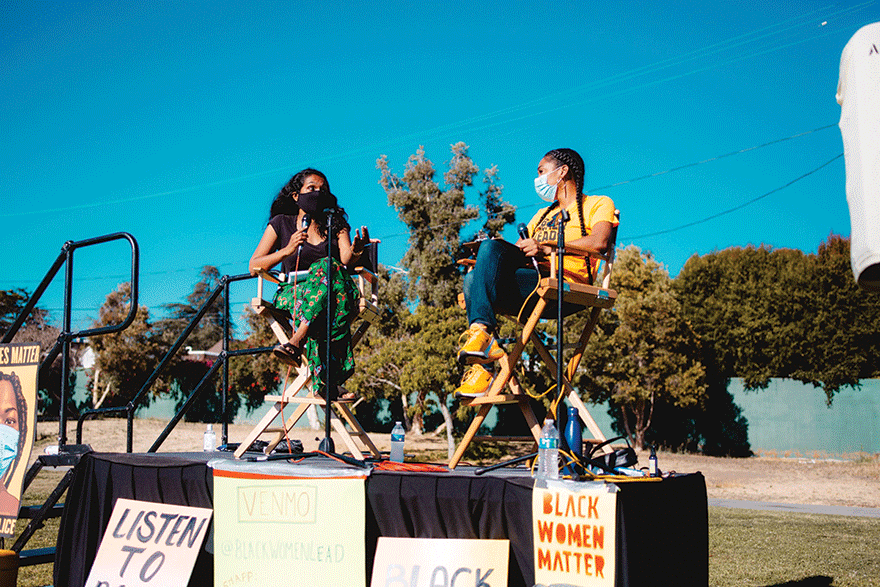 Politics can be a touchy conversation subject, but Shannon Morton, founder of Black Women Lead, a nonprofit dedicated to uplifting the voices of Black people, wants to remind everyone who will lend an ear that “politics is personal.”

On July 18, Black Women Lead presented Politics in the Park at Pan Pacific Park, its first community event series featuring politicians up close. The purpose of the series is to make leaders available to constituents and have an open dialogue about their goals, policies and who they are, Morton said.

“When I started this organization, I did it with the commitment to inform people,” Morton said. “The most radical protest that we can do is vote. Local elections matter and not just the big elections like the Nov. 3 presidential election.”

Raman, who is running against incumbent David Ryu in the race for Los Angeles City Council’s 4th District in November, was Black Women Lead’s first guest. Raman was interviewed by Morton about her position on issues regarding homelessness, the Time’s Up movement and policing.

Ryu was invited to be a guest speaker on July 24, but was unable to attend due to illness, said Julia Duncan, a campaign spokesperson for Ryu. The councilman had previously collaborated with Black artists and Black Women Lead on a 148-foot-long Black Lives Matter mural that was unveiled on July 8, Duncan added.

The Midnight Mission, one of the oldest nonprofits serving those who experience homelessness on Skid Row, has received donations from Black Women Lead.

Katya Askar, the manager of institutional giving at The Midnight Mission, said the nonprofit was grateful for the donations. Askar said all her life Black people had been in her life and in her home, but realized how much she didn’t know about social issues the Black community faces. Askar said Black Women Lead events are an opportunity for people to learn about different cultures, issues and the lived-experiences of others.

“You know the saying ‘it takes a village to raise a child’,” Askar said. “Well, it’s true, it takes a village, like local leaders, community activists and nonprofits, to solve issues like homelessness.”

Black Women Lead also donated to the Downtown Women’s Center. Lorena Sanchez, director of communications for the center, said it was great to call attention to the messages presented by Black Women Lead.

“We do work across L.A. County. We started off as an organization on downtown Skid Row and we work to break down systemic racism,” she said.

Sanchez said the Black population is approximately 8% in L.A., but Black individuals are disproportionately represented in the number of people who are experiencing homelessness in the city.

Although Politics in the Park was organized at Pan Pacific Park, Morton said the next two events will possibly be held online because of COVID-19. Morton added Pan Pacific Park is an ideal place for rallies, protests, food drives and more because it’s located in a more wealthy area of the city.

“Black people already know what is going on,” Morton said. “White people need to know and white people have to do more.”

Morton said the most important component of the series is educating people about policies that support Black women, the LGBTQ community and minorities.

“I always say Black liberation is bound with those of my LGBTQIA brothers and sisters,” Morton said. “I think that Black women don’t vote for their lives. They are selfless. We think about all the different people. I vote like my neighbors’ lives are in danger.”

“Democrats can’t expect the vote,” Morton added. “The days of them not being accountable are over. Let’s change our world, and our district, together. I am waging a war [for] transparency. There’s nothing we can’t do by having conversations.”